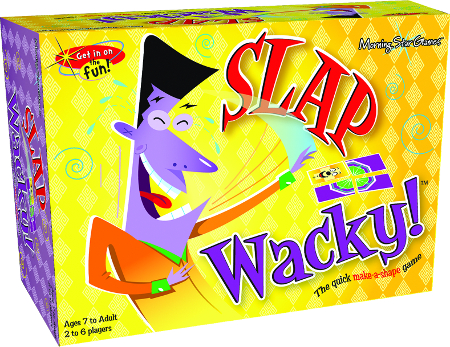 Isaiah Berlin said, “To understand is to perceive patterns.” This game takes it one step further. In order to be competitive, you must perceive patterns. Recognizing patterns is not enough to win, however. You must also have a fast mind and an even faster hand. This is a game that throws the players into a chaotic battle to quickly build, identify, and claim patterns that everyone works on simultaneously. Think fast and play fast to win!

Slap Wacky!, designed by Allen Wolf and published by Morning Star Games, is comprised of 72 Shape card, 6 Wild cards, and 6 Block cards. The cards are colorful and slightly thicker than your average standard playing card.

To set up the game, shuffle all the cards and deal 5 to each player, face-down. Players SHOULD NOT look at their cards yet.

Second, place the remaining cards, face-down, to one side of the playing area and within easy reach of all the players. This is the draw deck for the duration of the game.

That’s it for game set up. Let’s slap the bejesus out of the cards!

Slap Wacky! is a simultaneous real-time and action/dexterity game, which means there are no rounds or turns. Everyone plays at the same time – which is pretty chaotic. The goal of every player it to complete a pattern using 4 Shape cards and score it by being the first person to slap their hand on the completed pattern. A typical game is summarized here.

All the players now place Shape cards face-up on the table without taking turns. There are a total of 6 different patterns in the game (4 “wacky patterns” and 2 “face patterns) and only 1 version of each pattern can be on the table at the same time. This means, at most, the table will have 6 different patterns being simultaneously built by all the players. Four cards create a pattern, but there are ways to break this rule. 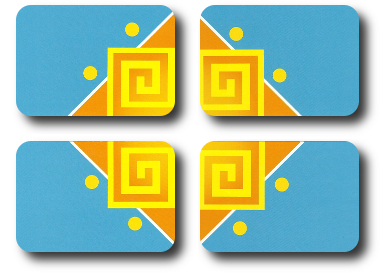 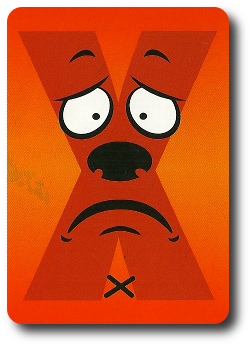 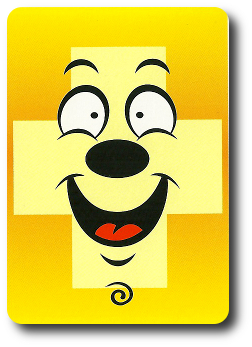 It’s very important that players remember to draw new cards whenever they play cards from their hand. A player’s hand can never contain anymore than 5 cards in total. New cards are taken from the draw deck. Note that players can only play cards when they are playable. There is no discarding. It’s possible that a player might be stuck with a card that they cannot play. However, unplayed cards do not count against the player, point-wise.

Vapor Lock at the Table

It’s possible that none of the players have cards that are playable. If this happens, every player draws 1 more card (temporarily increasing the player’s hand beyond the 5-card limit) until a player can place a card to a pattern. If the player has more than 5 cards in their hand, they do not draw a new card to replace played cards.

It’s possible, especially when playing with highly competitive individuals, that players stop placing cards. Most of the time, players do not place cards because none are playable. A player is never required to play a card, especially if it’s not in their best interest to do so. If all the players stop playing cards, but all players agree they have playable cards (this is important), then all players MUST play a card starting with the game’s first player. If a player doesn’t have a playable card, they are skipped until all the players agree that none of them have any playable cards. In which case, they draw cards.

Whenever a patter is completed using 4 Shape cards, the first player to slap their hand down on the pattern collects it and puts it next to them for later scoring. Reducing the total number of patterns being worked on allows a new pattern to be built, but it cannot be a duplicate of any pattern already on the table.

The game ends when there are no more cards in the draw pile AND all the possible cards can be played. Some players might be left with a few cards that cannot be played due to patterns being slapped using Wild cards. Any cards not played are set aside and do not count during end of game scoring. All the players now take the cards they slapped and count their points.

Slap Wacky! is a very fast game. Too fast for many. If you want to play more than 1 game, play a “best out of” where the winner is the player who wins the most games. For example, “best out of five”.

Players can decide that certain patterns are worth more or fewer points. This must be decided and agreed to before the game is played…obviously.

Players can decide that Wild and Block cards can only be played on certain patterns.

Slap Wacky! is a fast and chaotic game. Too fast and chaotic for younger players. To help alleviate some of the stress that comes with the feeling of being pushed and out of control, we allowed our youngest Child Geeks to look at their cards and organize them before the game began. This gave them time to look through their cards, match up patterns, and prepare for the game. This House Rule also opens the game up to Child Geeks as young as 4-years-old, possibly younger.

Games like Slap Wacky! tend to polarize our playing groups. Individuals either really like real-time action/dexterity games or loath them to a point where they are frothing at the mouth. I kid, of course, but an individual’s opinion always tends to be really positive or really negative on the whole when I ask them what they think about the game. I believe this has to do more with how the game is played versus the game itself. Some individuals like to sit down to a game and take their time. Being pushed to make moves puts some well outside their comfort bubble. As a consequence, the game is perceived as being bad. In reality, it’s just not a game a player likes.

For the Child Geeks and Parent Geeks, we are going to have mixed results. I don’t believe the Gamer Geeks are going to enjoy the game and will reject it. Of course, this is just a prediction and it’s fun to speculate. All three groups have surprised me in the past proving that no one should ever judge a game based on its box cover or glimpse of the rules. Where you determine if the game is a “good one” or a “bad one” is at the table whilst playing it with friends and family.

Teaching Slap Wacky! is all about making sure the players understand that the entire goal is to cooperatively build patterns and then competitively be the first to grab them. There is a bit of strategy to be had here. You should always work to help complete a pattern, but wait until the timing is right to complete it if you have the means to do so. Timing, as it were, is very important in this game. Note that this game only requires the player to be able to recognize patterns. The colors are helpful, but not necessary. Each pattern is unique and individuals who have difficulty seeing colors shouldn’t have a problem playing Slap Wacky! This also means that younger Child Geeks can play the game, but they will most likely be quickly out paced by their older siblings.

And so, after teaching Slap Wacky! to my 3 little geeks, I asked them their thoughts on the game so far.

“Colorful cards that are surprisingly sharp. You could cut cheese with these.” ~ Liam (age 9)

The cards are not rounded and are surprisingly sharp. They will fail to cut cheese or people, however. Let’s play Slap Wacky! and see if it’s an amusing game or a fast exercise in pain.

As predicted, both the Child and Parent Geeks were mixed when it came to Slap Wacky! Individuals who liked fast-paced games enjoyed themselves, while those who liked games where players took turns and could take their time thinking about their moves greatly disliked it. According to one Child Geek who really liked the game, “This game is exciting! It keeps you on your toes!” In response, a Parent Geek said, “On your toes, out of your chair, and wondering why you are working so hard to have a good time.” A Child Geek who did not like the game said, “It’s too fast. I didn’t have fun because I couldn’t tell what was happening.” But a Parent Geek said, “This is the best kind of game to play. It’s fast, competitive, and best of all, challenging!” In the end, both groups couldn’t come to a consensus and gave the game a mixed approval rating. 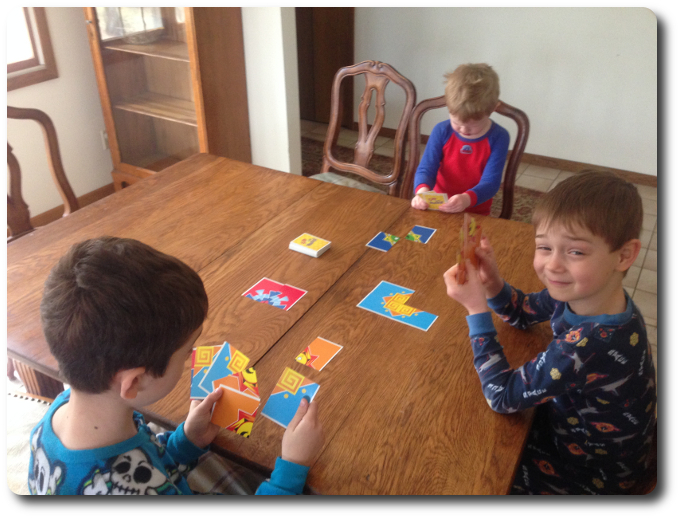 A quick number of plays to set the patterns, and then they all got really quiet…

The Gamer Geeks didn’t care for the game. According to one Gamer Geek, “The game’s pacing is alright, but the game itself is to simplistic. Just making patterns is not that interesting. I feel like I’m playing a more complex game of Slap Jack.” Another Gamer Geek said, “I can see this being a fun game to play with my kids and taking with me to the cabin, but it’s not a game I would ask for or bring to a gamers’ gathering.” Slap Wacky! was rejected by the Gamer Geeks.

You have to be in the “mood” to enjoy Slap Wacky! At least, that’s what I observed. Individuals who were ready for a fast-paced action game jumped right in. Any player who wasn’t was caught by surprise. It’s kind of like jumping into a cold lake. If you know that the lake is going to be cold, you can mentally brace yourself for the impact. If you aren’t, the effects of the cold water are multiplied. It was obvious to me when a player wasn’t prepared. Big eyes, open mouth, and a look that seemed to say, “what in the world is going on?” In contrast, it was also obvious when a player was mentally prepared for the game. They looked like a hungry tiger.

Games like Slap Wacky! are a fun change from time to time. It’s not a game I would want to play regularly due to its energy and chaos level. It’s a cold splash of water in the face that sometimes helps and sometimes leaves me feeling rather disappointed in my most recent life choices. It’s a mixed bag of competitive chaos that is sure to leave you feeling either invigorated or discouraged, but never both.