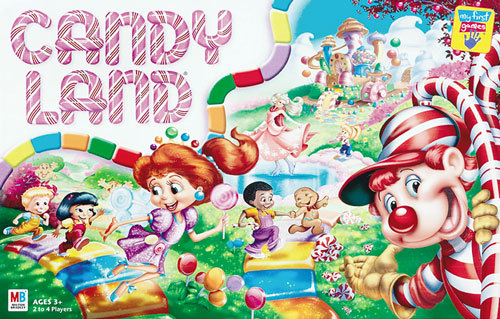 The classic game of Candy Land hardly even needs an explanation. Players choose a colored gingerbread man piece and move along a multi-colored path towards the game-winning objective of Candy Castle, where you find the lost king of Candy Land. Along the way, you might get to visit special locations like Gum Drop Mountain, and Candy Cane Forest, or you might get to meet special characters such as Princess Frostine and Gramma Nutt.

Movement is very simple. Draw a card and move to the next colored space that matches it. Some cards have 2 colored squares, which means you get to move twice. Some spaces have a licorice symbol and cause you to lose a turn, and to really mix things up, there is a special card for each of the special locations that causes you to teleport to that location.

Here is where it gets tricky. I actually read the rules for this (yeah, I know… why bother?) and did any of you know that Candy Land has both a basic and an advanced version? Really? That floored me. In the version for younger kids, one gets to ignore the teleport if it sends you backwards along the path. Phew!! My three-year old loves that rule.

This prompted me to do a little research–now you know what type of person I am that would actually research Candy Land–on some things that were tickling my memory as being changed. In 2004, the latest iteration was changed to make it even more kid friendly. Differences from the original are of note:

The end result of all this is that the game is even quicker to play and will show a kid continual progress toward the goal. It’s kind of like in Tee-ball where you can no longer get anybody out at first base, even in the rare case where the defenders actually performed an out correctly.

This is one of the few games that can be pulled out for young kids. My oldest is 3 years old and he loves playing this with me. It offers the opportunity to teach very basic gaming principles like taking turns and following a basic set of rules. It’s taken me the past 6 months of playing off and on before he finally accepted the concept that we had to take turns moving along the path rather than just skipping to the end. Finally, it’s also short enough to hold the attention span needed to complete the objective.

As a teaching tool, it does help teach colors. This is something 3-year-old children are still picking up early, and later in the year, often have grasped fully.

The game board is colorful, and has colorful characters. This is the type of thing that all kids like visually. As in other articles you find on this web site like Word to the Wise or The Importance of Play, the real fun comes when you make an effort to create that fun. Exciting moments are boiled down to simple things like drawing the same color that Daddy just drew, or hitting on one of those special pink cards.

Chase, my son, always feels bad when his piece is ahead of me, “You have to catch up, Daddy”, because he truly wants the game to be a shared social experience.