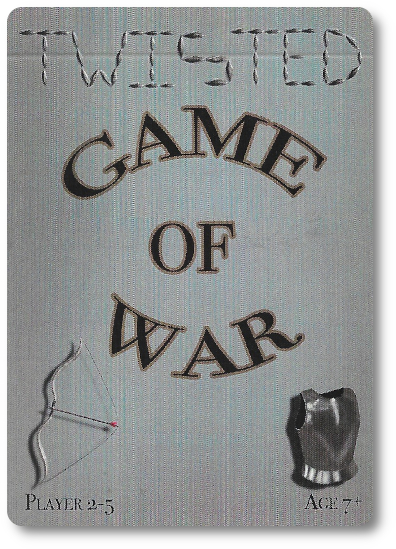 American politician and women’s rights advocate Jeannette Rankin said, “You can no more win a war than you can win an earthquake.” Unlike real war, in this game of quick skirmishes and battles, there will always be a winner. But as you’ll soon read, not everyone who played felt like they spent their time wisely, including the winners of the game.

Twisted Game of War, designed by Seth Hagan and published by Mental Eclipse LLC, is comprised of 65 cards and five Chart cards. The cards are as thick and as durable as your standard playing card. The illustrations are simple, highlighting various medieval arms and armor, giving each card a thematic element to help drive the point home that the players clash with cards.

To set up the game, first give each player a Chart card. This is necessary to play the game. Place any Chart cards not used back in the game box.

Second, shuffle the cards and deal all the cards to the players until you run out. All cards, once dealt, should be kept face-down in front of the player in a single stack. Players should NOT look at the cards.

That’s it for game set up.

Twisted Game of War is played in rounds with no set number of rounds per game. A game round is summarized here.

Each player takes the top card of their stack and places it face-down in front of them. When all the players have done so, simultaneously reveal the cards.

Step Two: Resolve Cards and Collect the Spoils of War

The player with the highest valued card wins the round. If there is a tie, the players with the highest numbered cards draw a new card, placing it on top of their previously played card. This continues until there is only one winner per round.

The winner now looks at their Chart card to determine how many cards they collect from their opponents who lost the round. This is done by matching the winner’s card symbol to each opponent’s losing card symbols. Possible outcomes include the following: 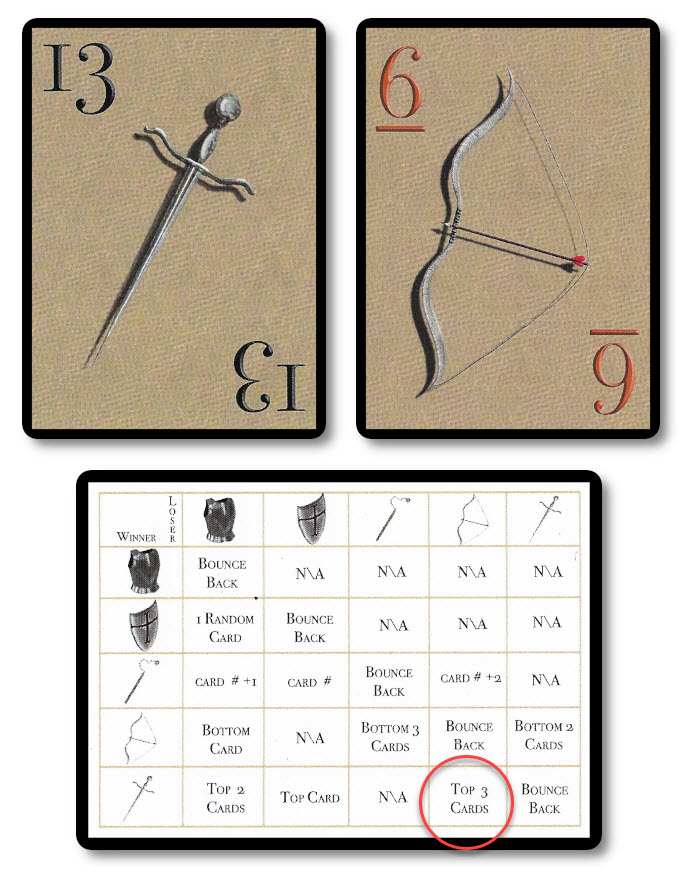 Collected cards are placed at the bottom of the winning player’s stack.

The Battle is Won

The game continues until only one player has cards left. This player is the winner of the game.

To learn more about Twisted Game of War, visit the game’s webpage.

The Child Geeks were familiar with the traditional card game of War and were eager to try a new take on a game they had played with friends in the past. The outcome of their experience was mixed, at best. According to one Child Geek, “I mean, it’s War, but with an additional card that you have to look at to determine what happens. I guess that’s interesting, but it made the game go a lot slower.” Another Child Geek said, “I like that the cards show weapons, and I think it is fun to make noises of swords hitting shields. I don’t think the game is bad, but I would be OK with just playing with a deck of normal cards, too.” Long story short, the Child Geeks played the game, shrugged their shoulders, and moved on. Their votes indicated they didn’t particularly care for the game, nor did they dislike it, giving it a solid “meh” review.

The Parent Geeks were not thrilled with the game. According to one Parent Geek, “The card game is nonsense, and I don’t mean this particular game. I mean the War card game, but we all played it as kids, and I played it with my children when they were very young. Great way to practice numbers. But once you know your numbers, you move on. This game felt like a step in the wrong direction – backward if you will – at my family gaming table.” Another Parent Geek said, “I’m struggling to determine where this game would sit in my collection or on a list of games to be played. It’s more complicated than War but is still War, meaning it isn’t really a different game. Just the same game with more to do that doesn’t change the game but any degree to suggest it is a different or better game. I played it with my kids and – well – yeah, it’s War. We got bored pretty fast.” When the games were over, there was no twist to the game’s outcome or the vote.

The Gamer Geeks really disliked it. According to one Gamer Geek, “Ha! No. Just no. No, no, no, and no thank you.” Another Gamer Geek said, “This is not a game any Gamer worth his or her salt would seriously play. I can see it being brought out as a joke or played with kids, but at a gamer’s table? Certainly not. I would expect to see a vegetarian eat a 12-ounce steak before I would expect to see this at my gaming table.” Of course, there were other comments, but they ranged from just being mean-spirited to not worth printing due to the vulgarity of their expletives used to describe their complete and total disinterest in the game. So it shouldn’t come as a shocker that the Gamer Geek, those elite elitists that they are, gave Twisted Game of War a resounding “hell no.”

War is a card game I believe most of us had played in our lives and most likely when we were young. If you played it recently, you most likely played it with a Child Geek. It’s an easy game to learn and effortless to play. I remember enjoying it as a Child Geek. As a Parent Geek, I tolerated it because my children wanted to play the game. Much in the same way, I tolerated Candyland or Hungry Hungry Hippos. If I were with a peer, I wouldn’t bother to bring the game up, ever. That is why it came as no surprise to me the endorsements that my reviewers provided. It makes absolute sense that the Child Geeks would enjoy it, the Parent Geeks indulged their children and played the game with a smile on their face (but not in their heart), and the Gamer Geeks … Well, I think their statements say it all.

Let me be clear. This is War. Oddly enough, this version of the game is not any more complicated or deep, but it’s unnecessarily busy. Is it good enough to draw a card and determine the winner based on the number value? Apparently not, but even with the “twist” in the game, there was nothing to show for it. With the addition of the chart that must be referenced every round, the game feels very jerky. Fast reveal and then a slow matching of the symbols for each card, resolving each losing card against the one winning card. Then fast again, followed by the tediousness of the chart referencing. Ugh.

I didn’t care for the game. I didn’t care for it, and I didn’t think it was necessary. The matching of the symbol gives different outcomes, sure, but to what end? The results are always – and I always mean – random. You might as well roll dice, count the value, and then see what that value means on a table. For goodness sake, no. Not needed and not welcome. It’s like adding extra icing on an already too frosted cake. No value.

But here’s the deal. If you like War, I’m sure you’ll get a kick out of this game. I have always said, “for every game, there is a player and a player for every game.” I stand by that, believe that, and this is why I love reviewing games with friends and family so much. I learn a great deal about our hobby, my players, and myself. What did I learn here? This game is not for me and not for a lot of folks I know. But, maybe, it’s for you. Wouldn’t that be a twist?