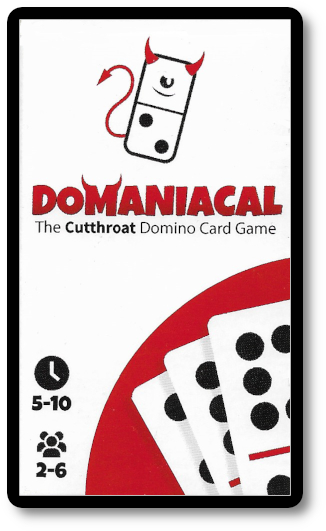 I fondly recall playing Dominos with my grandmother at the family table when I was just a little Child Geek. I don’t recall there being much of a “game” to it other than having fun matching numbers and creating interesting connections. Little did I know my grandmother was tricking me into doing math, recognizing patterns, and thinking strategically about what tiles I was using! Much later, I would use the same trick with my own little geeks, which worked great. In this game, the same is asked of its players, but the only real trick is managing your hand intelligently, so you always have options and a road to victory.

Domaniacal, designed and self-published by Hunter Ball, is comprised of 45 Domino cards, one Quick Start card, and one Tips card. The cards are slightly thicker than your average playing card and about half the size. The cut of the card is meant to replicate the dimensions of a traditional Domino.

To set up the game, first shuffle the Domino cards and deal four to each player, face-up. The remaining cards are placed in the middle of the playing area, face-down. This is the draw deck for the duration of the game.

Each player takes their cards and selects one to start their Stack pile, face-up. The other three go face-up in front of the player in a row. This row is referred to as the player’s hand.

Domaniacal is played in turns with no set number of turns per game. A player’s turn is summarized here.

Step One: Draw One Card

The player draws one card from the draw deck, placing it in the player’s hand (row of cards).

The player now looks at the cards in their hand and attempts to play them to the top-most card in their Stack pile. To play a card to the Stack pile, the card from the player’s hand must have at least one matching number of “pips” (i.e., “dots”). A player is never forced to play any cards to their Stack. They can play as many or as few as they like.

The player’s turn ends when they can no longer play any cards to their Stack from their hand or announce that their turn is over.

Stealing is A Good Thing…

In the rare case that all the cards in a player’s Stack have been stolen and the player finds they have no Stack pile to play to, they draw one card to create their Stack. They then start their turn with step one noted above.

When the draw pile is depleted, gameplay continues without step one being taken. Players continue to take their turn, with players being skipped if they cannot play any of the cards in their hand or their hand is empty.

After it’s determined that all the players can no longer play any cards, the game comes to an end. Each player counts the number of cards in their Stack pile. The player with the most cards wins.

The game can be changed to make it faster for two players by drawing two cards at the start of every player’s turn. More cards mean there is a better chance of always playing a card, but it also means the draw pile will be depleted faster, too, bringing the game to an end.

Longer games are also possible, if needed, by removing the ability to steal from an opponent’s stack. It does, but not by much. This variant also makes the game less interesting.

Of course, if you want to be really all up in each other’s business, there is a variant that allows players to steal from an opponent’s Stack and hand. The same rules apply otherwise.

To learn more about Domaniacal, visit the game’s webpage.

The Child Geeks, especially the youngest among them, really enjoyed the game. They found it very satisfying to sit at the table with older players and be just as competitive and active as their older siblings and friends. According to one Child Geek, “The game is straightforward to understand, and the math is not hard. Just count the dots! You need to watch your cards and make sure you don’t skip a number.” Another Child Geek said, “I like it because it makes me think but not too hard. I like how you get to use your own cards but can use the cards of others if you want to. I don’t mind if someone steals my card because I can always use what I have.” When the last card was played, the Child Geeks did the math, and all decided Domaniacal was a winner.

The Parent Geeks also enjoyed the game, finding it fun to play with their family members and friends, regardless of age or experience. According to one Parent Geek, “I would much rather keep a small deck of cards in the car for easy games with the kids when at a picnic or the cabin rather than a box of lots of bits. I really enjoyed the game, found it fun to play with everyone, and challenging as well. A perfect mix of fun and ease.” Another Parent Geek said, “Simple, to the point, and fun. It kept me interested – which was surprising considering how simple the game really is. Only a few rules, but every game had me thinking and smiling. I’d play this again and again.” When the last pip was counted, the Parent Geeks found that Domaniacal added up to fun.

The Gamer Geeks were not enthralled. According to one such Gamer Geek, “It’s Dominos with cards. Nothing really here. If you like Dominos, maybe you’d like this game. I don’t, and the card game did nothing to change my mind. I found it too easy, too obvious, and not nearly challenging enough to even make me raise an eyebrow. No thanks.” Another Gamer Geek said, “A great game for the most casual of players and families, but not for elitists or those who like a game with depth. Playing this game was like dipping my toe in a cup of water. I want to dive into the deep end of the pool. This game never once felt imaginative or engaging. Not for me.” It didn’t take the Gamer Geeks long to realize that Domaniacal was a game to avoid if you were an elitists gamer.

Domaniacal is straightforward, to the point, and fun for those who are looking for a casual game that does take some thought but doesn’t challenge too strongly. The card box suggests players be at the minimum age of eight years old. Don’t you believe it. As young as five years old, we had players quickly grasp the game’s rules and gameplay, competing at the table with much older players without the need for help. This is most likely why Domaniacal was also sneered at by gamers who enjoy opening a game that comes with a two-pound rule book.

Domaniacal will satisfy that little itch that you might have from time to time that can only be addressed with a simple game with simple rules and simple objectives. Simple, yes, but not a walk in the park. You do have to think things through, or you will find yourself not being competitive. But then again, maybe that’s not your goal. In which case, you’ll find Domaniacal to be still fun, but it will never challenge or ask you to do anything you don’t want to do. The game is super easy-going – very Zen – and allows the players to be as cutthroat as they like or not. This is a number matching game with all the possible cards to be used out in the open and easy to point to. Zero stress here, and that is exactly how our casual players liked it.

If you are looking for a game that will let you slow down, take a deep breath, and enjoy a beverage of your choice, sipping in contentment, then do try Domaniacal when time allows. It entertained and fulfilled its promise of fun for most of our groups except those who like their games to stress them the hell out.