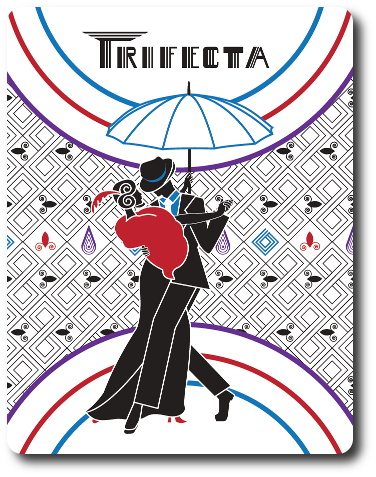 In some tribal warrior societies, endemic warfare was present. A constant and subtle war between two opposing forces with no grand battles or epic assaults. Warriors faced off and engaged in ritualistic battles that would always result in a winner and a loser, but very rarely ever left anyone badly hurt. In Trifecta, two players will engage in battle and jockey for position, as each player attempts to subtly gain an advantage over the other.

Trifecta, a self-published game (and recently picked up by Victory Point Games) designed by Zoran Dobrijevic, is comprised of 45 cards. Out of the total number of cards, 39 create 3 full suits (Ace to King). The remaining 6 cards are referred to as “Row cards”. The Row cards are comprised of 2 suit Row cards and 4 plus/minus Row cards. These are used in the game by the players to organize their side of the playing area into rows and to identify what card values they can play.

To set up the game, first have both players sit opposite of each other with enough space between them to play the game. A playing surface slightly larger than your average coffee table will do.

Third, take and thoroughly shuffle the 39 cards that remain and place the deck in the middle of the playing area between both players, face-down. Leave room next to the draw deck for a discard pile. When done, your playing area should look something like the following image. 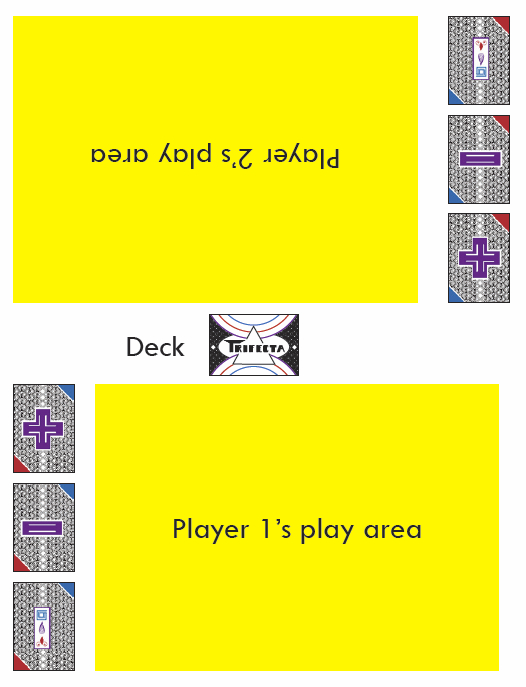 That’s it for game set up. Determine who will go first and begin!

The game is played in turns. Once one player finishes their turn, the next player goes. This continues until the game ends. A player’s turn is summarized here.

The first action the player will take is draw a card from the face-down deck in the middle of the playing area. This card is the only card the player will use on their turn. All face cards (Jacks, Queens, and Kings) have a value of “1” and the Ace has a value of “1” or “11” (the owner of the row determines their value). All other cards share the value of the number on their face.

The card that was drawn can be played to one of the player’s rows, one of their opponent’s rows, or discarded. The Row cards determine the card value that can be played and in what sequential order.

Additionally, a few of the cards in the game can be used for specific actions other than their printed value.

If the row has 5 cards in it, it is now scored. Otherwise, this step is skipped and the next player has their turn starting with step 1 above.

Once a row has 5 cards in it, the row’s total value is counted. A row’s total value is determined by adding up the face values of the cards in it. If the result of the count is a number equal to or between 21 and 26, the owner of the row scores a point. If the value is not equal to or between 21 and 26, the row doesn’t score any points. Regardless, the row is now cleared and all the cards from that row are sent to the discard pile. The Row card remains.

When scoring, remember that the Ace is worth “1” or “11” points. The value of the Ace is determined by the row’s owner.

The game continues until one player has scored a total of 3 points (3 rows). This player is the winner.

Trifecta is a very simple and straight forward game. The players only ever have 3 options when they select a card. They can play it in hopes that it helps them, play it in hopes that it doesn’t help their opponent, or simply discard it. This makes the game very easy to teach and to play with the Child Geeks. The only limitation I see is based on a player’s ability to do very quick and easy math in their head. For my 8-year-old and any Child Geek who can do simple addition and subtraction, this game is most certainly within their grasp.

The Parent Geeks will most likely enjoy the mathematical challenge the game will provide and the very casual game play. They will be disappointed it only allows for two players. While they are used to games that only allow for a small group to play, they prefer games that allow the entire family to join in on the fun.

The Gamer Geeks won’t care for this game at all. It’s very random and way to simple. While perfect for the Child Geeks and Parent Geeks, Gamer Geeks demand more from their games. Trifecta simply doesn’t provide what I would consider the level of game play that a Gamer Geek would consider compelling.

Teaching that game is very easy and I only focused on making certain that my little geek understood that the Ace counted as  a “1” or “11” and the additional powers of the King and the Two. It helped my little geek to associate the name “King Minus” to the King card to remember that Kings always changed plus Row cards to minus Row cards. It was just a matter of remembering that the Two worked in the opposite way. And so, while I waited for my little geek to shuffle the cards, I asked him his thoughts on the game so far.

“Very simple. Very straight forward. And very fast. This game will be a good one for us when we want to play a game and don’t have much time!” ~ Liam (age 8)

Yes, indeed! But let’s play it a few times first to see if it’s even worth the effort of shuffling the cards.

Trifecta was found to be a fun game by the Child Geeks. They enjoyed its simple game play and very easy learning curve. For those Child Geeks who had some difficulty with math, their turns took a bit longer as the counted up a row’s value with their fingers or in their head. When Child Geeks played against their peers, it was a great game to watch. Child Geek against Parent Geek was also a great time. Best of all, the Parent Geeks never had an advantage. This is because the cards are always random and a player need only consider what they should do with the card they just drew. This greatly pleased the Child Geeks, especially when they won a game against their parents. 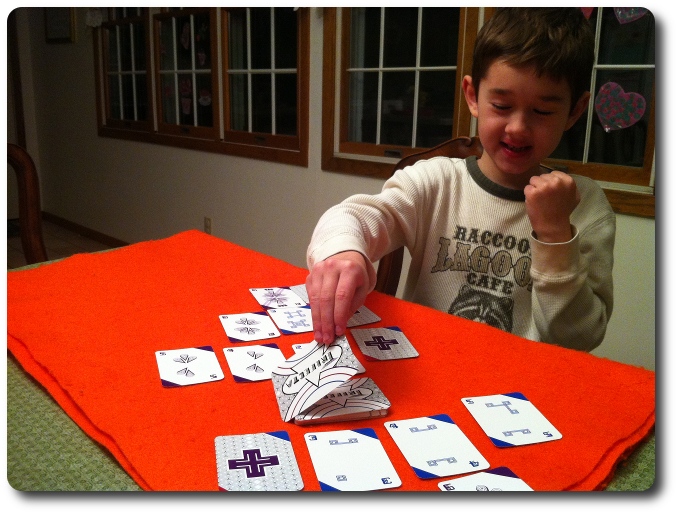 My little geek is most pleased with his card, as his body language clearly shows

Parent Geeks agreed to approve the game, but were disappointed that it was only for two players. They didn’t see any reason why you couldn’t buy another deck and play up to four players, but this was never tried. The Parent Geeks thought the game played very well, had just enough strategy to not be mind-numbingly simple, and helped their Child Geeks strengthen their math and logical thinking skills. Every game we observed never took anymore than about 10 or so minutes with adults, with the games with the Child Geeks taking up to 20 or a little less. This was most pleasing to the Parent Geeks because it meant that one or more games could be played in a very short amount of time.

The Gamer Geeks didn’t care for Trifecta. They didn’t like the fact that players were only given 1 card at a time, what you needed to do with the card was always obvious, and the game lacked any real depth. They did acknowledge that you could skunk another player by playing a card at just the right time or gain a serious advantage by counting cards, but that wasn’t enough for them to think the game was worth a Gamer Geek’s time.

Trifecta is a good game for two players that is simple, elegant, fun, and quick. It’s casual and can be played at restaurants, at the park, or in a hotel room. When the weather gets nice, it’ll be a great game to take camping, too. Unless you camp during the winter time in the snow, in which case, do take Trifecta with you. Despite its lack of depth or strategy, the game does make you pause for a moment and think. A player has to observe up to 6 rows at all times and each card drawn can either lead to victory or defeat. A neat game of subtle row manipulation, logical thinking, and timing.

One Response to Trifecta Game Review