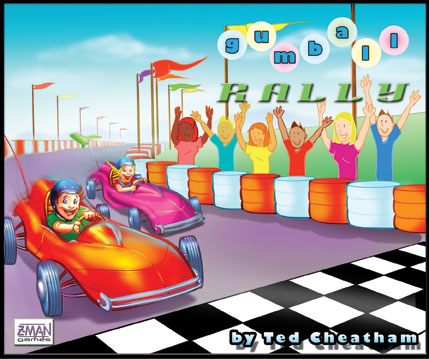 Gumball Rally, designed by Ted Cheatham and published by Z-Man Games, is a card game with a light racing theme.

The game sees players jostling for position; however, their cars do not move around a track, but remain in a line ordered from first position to last (as in the game Formula Motor Racing by Reiner Knizia). The goal, or one might say the trick, is to be in the lead when it counts, i.e., at the finish line and (to a lesser extent) at the two checkpoints along the way.

Every turn, starting with the player in the lead and proceeding in line order, players each play one card (from their hand of three) either to overtake the car ahead of them, or at least to avoid being overtaken by the cars behind. We need not go into the specifics of how the cards interact with one another; suffice to say that the rules are quite simple and provide ample opportunity for overtaking, sometimes even for moving all the way from last to first. The last-placed player always has the last say and therefore the advantage.

After each turn, one card is turned over from the “hazard deck” (in essence, the time track), within which the checkpoints and finish line are shuffled. The first checkpoint will occur between turns 4 and 7 (inclusive), the second checkpoint between turns 8 and 11 and the finish line between turns 12 and 15. Players occupying first to third places will score points at each checkpoint, while first to fourth place-holders will score points at the end (there are separate cards to indicate how many points have been scored). On other turns, there are “hazards” that may cause one or more of the leading cars to move to the back of the line. Players will refill their hands to three cards, and it’s onto the next turn!

This is a simple, short game with decent components. It is a good filler suitable for younger players; adults will not tire of this one too quickly either. I recommended it here as an ideal travel game. Luck plays a major factor: as the lead is constantly changing, one must take a gamble on the best time to surge to front, hoping that it will coincide with a scoring turn. While this game can be enjoyed (and even won) with fairly random card play, a small edge can be gained by playing strategically.

We usually play this with the minimum of 3 players, but I have no doubt that it would be more fun with a larger number of players. 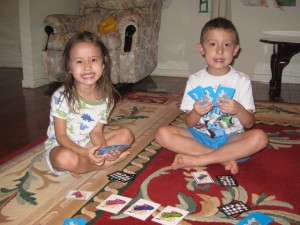 The game evenly poised at the second checkpoint