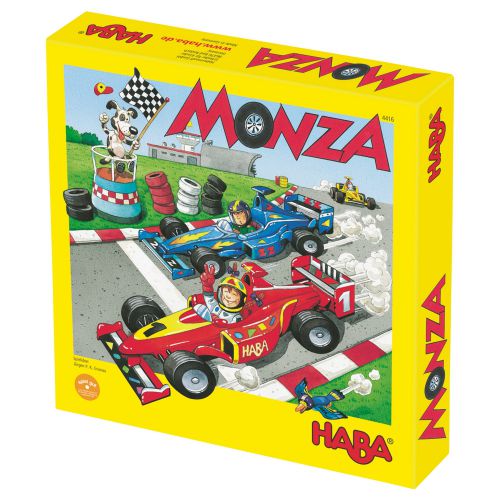 In Monza, each player takes on the role of a race car driver looking to win the “big race”. While speed might seem like the best answer, any veteran race car driver will tell you that using your head is just as important as using your gas pedal.

Monza, designed by Jürgen P. Grunau and published by HABA, is comprised of a foldout game board that represents the racetrack, 6 different colored wooden race cars, and 6 six-sided dice. The dice and cars are painted and made of wood and the game board is colorful and printed on sturdy cardboard. The game is of high quality and designed to last.

The game board contains three lanes with colored spaces. The colors are randomly placed and staggered. Some of the track spaces are grey and contain an image of a tire. These spaces are considered “obstacles” and cannot be entered or passed through. 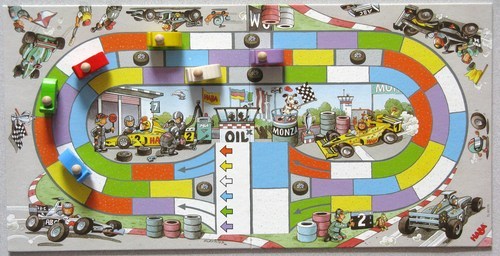 To set up the game, each player selects what car they want to drive and places it on the colored arrow that matches their car’s color at the starting line (there is no advantage to car placement). Once all the cars are placed, the race is ready to begin!

On a players turn, they take all the dice and roll them. On each of the die, a single color will be shown. These colors match the colored spaces on the board. It is the player’s goal to use as many of the colors as possible to advance their car forward. This is done by matching the colors on the dice with the colors on the board on a 1:1 basis. However, the “rules of the road” don’t make this task as easy as it sounds. The following must always be observed:

The Role of Dice

Obstacles and Other Cars

Monza is a wonderful game to introduce to your young little geeks, but it won’t be long before a more challenging game experience is desired. Don’t give away your copy of Monza just because your little geeks have mastered the basic geek skills it provides! The game itself is ripe for game customization! Here are a few House Rules my family has created that addressed some of the original game rules we did not agree with or were added to make the game more challenging.

The rules suggest that players should use all 6 dice. This is correct and makes sense when we consider this is a race game. However, we wanted to give the players more control over their car. This House Rule allows the players to decide to not use a die or dice. The player can then block parts of the track and play more offensively/defensively, as well as put themselves in a better position. Use this House Rule with the “No Passing” House Rule.

The rules state that you can only move if a die color matches the track section color. Sometimes, a player will roll all 6 dice and not get a single color they need. This House Rule allows the player to move their car forward one space to any track color, but ONLY if the dice colors rolled do not allow the car to move forward. This also keeps the game going as it forces all cars to move forward throughout the game. Technically, a player can win the race by simply allowing momentum to push them over the finish line.

The rules state that a player can land on a player’s car (end their turn in the same space as an opponent’s game piece), which pushes the original car back and the new car to occupy the track space. We found this to be rather clumsy as it created a domino effect that can be rather confusing. This House Rule makes landing on a player’s space or moving through that same track space an impossible move in the same way the tires in the track cannot be landed on or moved through. Be sure to add this House Rule to the “Momentum” House Rule to ensure that cars can always and MUST move forward.

The rules state that you roll all six dice and then match each die color value to each track value. This House Rule allows the players to group colors and stack them to create a Nitro boost. This boost will send the player’s car forward on the track without the need of matching track colors, but it is a tricky maneuver to manage and costs dice to use. Note that you must use the “Brake Peddle” House Rule for this to work. Here is how it works.

In essence, “Nitro”is like “Momentum”, but with a boost!

Monza is much more than a roll-and-move dice game. There is a light element of logical and critical thinking that encourages your little geeks to determine how best to use the dice. The game rules state you must use all the dice, but it never states in what order. This allows the player to determine if they want to use the dice to play offensively or defensively by going as fast and as far as they can or make tactical decisions that pump their opponent’s cars backwards. Once my little geeks understood how the dice were to be used and how they could influence other players on the board, the game stopped being a roll-and-move affair and turned into something that was much deeper and more entertaining. I love watching my two oldest boys work things out in their head. 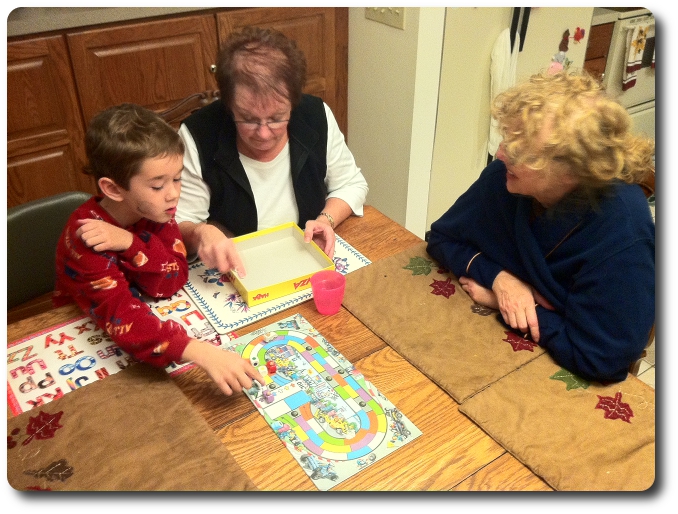 What I like most about this game is also what I like the least. The dice of the game is a great equalizer when it comes to game play. Even if you have countless hours of complex games under your belt, you have no advantage over the 3-year-old because everyone rolls the same dice. And the dice are fickle, my friends. Or, at least, they can be. Several times over, one of my little geeks (and even myself) could not get a color that advanced our car. This is frustrating, as you can imagine, and I have to often remind them that the results of the dice are simply a matter of randomization. This provides an excellent opportunity to reinforce the little geek’s emotional coping skills. Luckily, it’s not often that the dice fail the player completely.

This game is fast, fun, and is vastly superior to Candy Land. In fact, it has replaced Candy Land in my house. I couldn’t be happier. There is also enough “meat” to this game to attract adults to play, too. This provides everyone at your family gaming table an easy to play, easy to teach game that can be enjoyed by your entire clan. Do give this game a try.