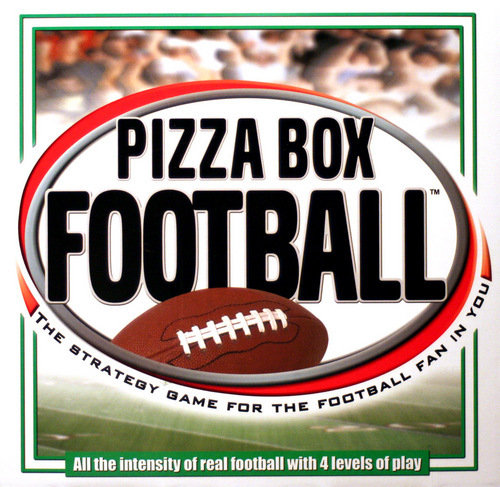 Pizza Box Football, by On the Line Game Company, is an American football simulation game. Each player plays the head coach, calling offensive and defensive plays in hopes of marching down the field and scoring (or stopping a touchdown). Games can last anywhere from 20 minutes to an hour, based on the various play resolution rules that are being used. The rules of football apply, so it really is an easy game once players get used to resolving die rolls. As a player, you decide whether to run, pass short or pass long on every offensive play. As the defense, you determine which of those three to defend against. Roll your dice to determine how well your team performs on the play, and adjust the board accordingly.

This game comes in a box which could have been used to deliver a small pizza, hence the name. The box helps to elevate the board, which allows the use of different colored pegs. The pegs are included for use as markers for yardage, downs, location of the First Down marker, and the score. There are several dice included in various colors and sizes, and charts for turning die rolls into play results.

The size of the smaller dice and the pegs do present a bit of a choking hazard, so this game should be played with some supervision around babies and toddlers. There have been some instances of the board warping, but not beyond being serviceable. The game is published by the designers, who have only created this game and Pizza Box Baseball, and the difference between this publisher and the larger publishers shows a bit in the components. Nonetheless, the game is a lot of fun and easy to understand!

To play, the board is set up within the box and each player takes a team card with die roll tables. In the base game, these cards are identical. Cards for kicking and “mishaps” (fumbles and the like) are set aside and within reach. After determining who will receive the “ball” first, players take the appropriate offensive and defensive dice. This game is quick to set up!

Plays from scrimmage start with the offensive player choosing a red, yellow or green die representing a run, short pass or long pass play, respectively. The die remains hidden in the player’s hand until the defensive player announces which type of play he will defend against. The players roll their dice, cross-reference tables, and generally roll again for yardage gained based on the first result.

Where this game really shines is when you play with the NFL expansions. These were sold for a few years for all of the teams by the publisher. During that time, and continuing until at least the last Super Bowl, they also published charts for the two teams in the Super Bowl as free downloads from the website. Additionally, a fan of the game received permission to publish team cards after last season, and so there are cards on Board Game Geek for each team based on the 2011 statistics.

What do these cards do? Well, with the base game cards, each of the two teams are identical. This means you have a sort of Rock-Paper-Scissors game going on which is somewhat influenced by the down and yards-to-go situation. The NFL team cards reflect the strengths and weaknesses of the individual teams, adding another factor in deciding what plays to call. It’s 3rd and 8, but I have a stronger running game – do I run? What is the strength of my opponents defense? It’s your call!

After the game clock has run out, the game is over. The player with the highest score wins, just like in the real thing!

There are four variants to the game, all designed so the game fits the time you have available.

This game is easy to grasp, set up and play. It feels like football, so it’s a great game for Child, Parent, and Gamer Geeks who love the sport. I have owned this game for a few years, and played it with my son when he was younger, and played with adults re-enacting the Super Bowl. 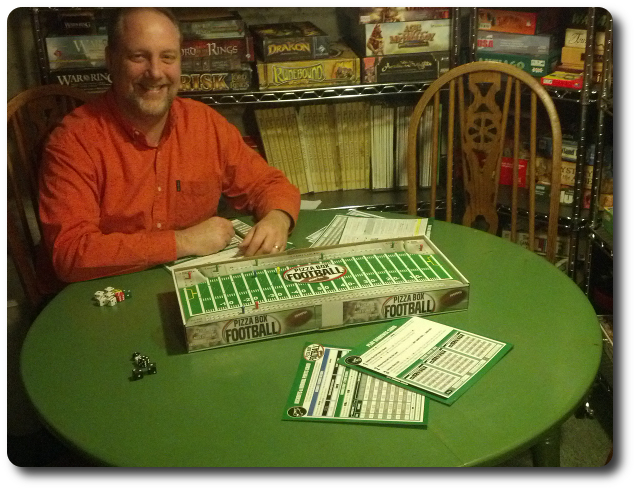 The caveat to this is that it tends to play very well with people who love gridiron football, and not do so well with people who don’t. Being a game that is heavily football themed, as demonstrated in the game mechanisms and game play, this makes total sense. It also has a hard time competing with football video games. Nonetheless, it is a great game, and definitely worth owning.