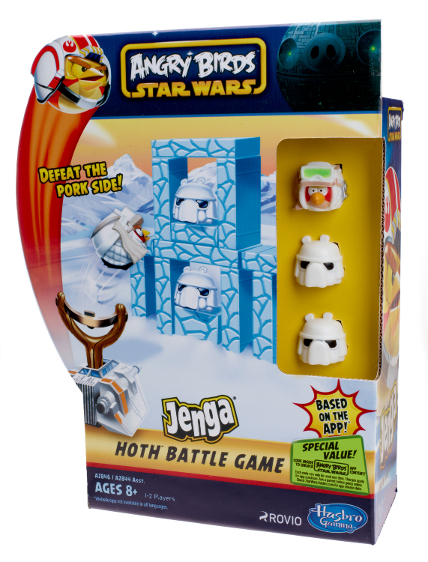 The Rebels have gathered their forces on the remote ice planet of Hoth. There, they plan for their next strike against the Empire. Leading them is Luke Skywalker, a young bird with powers of the long gone Jedi order. Suddenly, the proximity alarms are triggered and the cameras show the Empire has found the Rebel base! Time to go put those Imperial swine down!

Angry Birds Star Wars Jenga Hoth Battle Game, by Hasbro, is comprised of 1 Luke Skywalker Angry Bird, 2 Imperial “Pig” Snowtroopers, 1 Build die, 1 Launcher die, 1 Rebel Snowspeeder Launcher, and 12 translucent plastic building blocks. All the pieces are made of plastic (or in the pigs’ and bird’s case, rubber) and very durable. Not included in the game, but necessary to play, is some sort of method of recording and keeping track of points. A pen or pencil and a piece of paper will suffice. 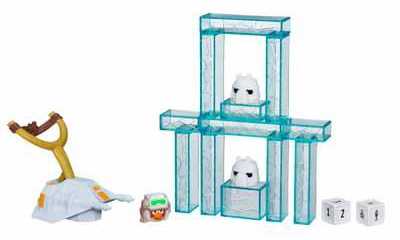 Please note the game will require you to place stickers on the Build and Launcher die prior to your first game. You will also need to play this game on a flat and stable surface. Carpets won’t work, but a kitchen table will. The floor, too, but not if you have Baby Geeks or puppies.

The game set up is also part of the overall game play. To set up the game and start playing, first dump all the pieces out on the table.

Third, the player with the Build die now rolls it and builds the structure shown on the die roll results using the translucent plastic blocks and the 2 Imperial “Pig” Snowtroopers.

Fourth, and only when the structure is done being built, the other player rolls the Launch die. The number rolled indicates the number of “birds” or attempts the player gets to knock down the structure.

Fifth, the player who is attempting to knock down the structure now takes the Snowspeeder Launcher and the Luke Skywalker Angry bird. These are set in front of the built structure. The rules do not suggest a specific distance or angle. The players will have to decide what is considered “legal”.

This completes the set up and build. Now for the destruction!

The player who currently has control of the Snowspeeder Launcher now places their Luke Skywalker Angry Bird in the basket and pulls it back like a catapult. Note that the structure itself does not need to be totally destroyed. The only objective should be to remove the pigs from the blocks they are currently placed on.

The player is given a number of tries equal to the Launch die rolled result (values 1 through 3). The player need not use all their attempts. In fact, the goal is to knock the pigs off the blocks in as few tries as possible. There are two possible outcomes.

Once the points are recorded, the game is reset and the set up portion of the game is repeated. The roles reverse, however, with the Build player now becoming the Launch player and vice versa.

The game ends after each player have had 3 turns, where they have launched and built 3 times each. The points are now tallied. The player with the most points wins the game.

The game can also be played solo. For a single player game, the player rolls both die at the same time, builds the structure, and attempts to knock down the pigs. Points are scored at the end of each turn. Once 3 turns are completed, the player’s points are tallied. The final score is now considered the “top score” and it should be the player’s goal to attempt to beat it when they play again.

This is a very easy prediction to make. You don’t need special powers to know that this game is going to be a BIG HIT with the Child Geeks, approved by the Parent Geeks (albeit reluctantly), and the Gamer Geeks are going to give me a lot of grief for even suggesting that I play this with them. But will it have any staying power? We’ll have to see, but I can already tell this game is going to get some serious table time when first introduced. The next day? Hmm…maybe not so much.

Teaching the game takes all of a minute, but it will help to give your little geeks a few examples of how to build the structures. If, for nothing else, just to make sure they understand the icons on the Build die. After that, the only thing that will be of any difficulty is making sure players don’t bump the table or accidentally cause the structure to fall. And so, after showing the game to my little geeks, wrestling it from their hands long enough to demonstrate it, we got ready to play our first game. But before we played, I asked them what their thoughts on the game were so far.

There you go. Awesome. Let’s play and see if the Force is strong with this game.

As predicted, the Child Geeks were all over this like Mynocks on a power cable. They enjoyed the game very, very much, and to a point where the Parent Geeks who were observing really didn’t understand how such a simple game could bring about so much joy. But bring the joy it did, and in abundance. When I asked the Child Geeks who had played the Angry Birds video game, all of them had. When I asked if they would enjoy the game if they didn’t know about Angry Birds, they all said yes. True or not, the Child Geeks LOVED the game. But only for a time. The next day the game was less impressive and was barely touched. Their level of excitement might have been heavily based on the fact it was new. But the next evening, the game was being played again by my little geeks with as much fervor as the previous night. Looks like this game is a winner. 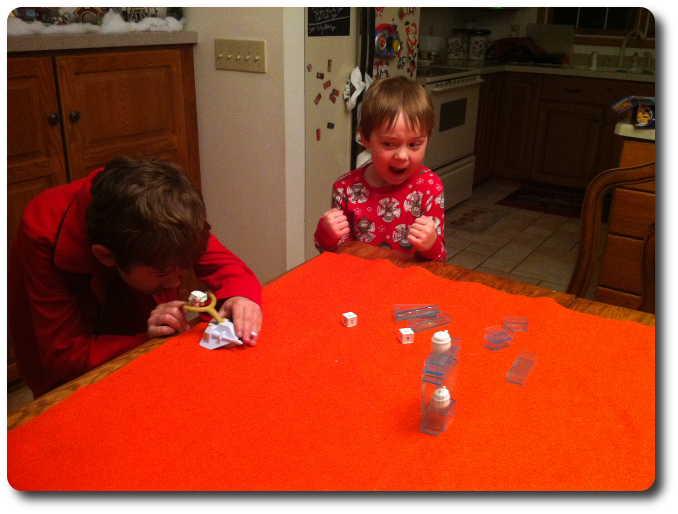 My 5-year-old yells out a battle cry as his older brother aims for the kill!

Parent Geeks were at a loss regarding this game. They understand the connection between the table top game version and the video game version, but don’t see how it can be as fun as the one on their Smart Phones and computers. Still, they did appreciate the fact that the game challenged their Child Geeks and required them to do some light mathematics. According to one Parent Geek, “I don’t understand the game and I don’t like it, but if it gets my son away from my Smart Phone, I’m in love.” And that pretty much summed up the Parent Geek experience. They liked the game because it educated and got their Child Geeks away from their electronics.

Gamer Geeks said “No” to this game. They played it once. Once. After that, they said it was “too much effort for too little fun.”

I really don’t understand how the Angry Bird table top game line continues. Clearly the table top game version is riding heavy on the shoulders of its video game counterpart. I doubt very much that it would be on shelves if it weren’t for the video game version’s popularity. Regardless, Hasbro is laughing all the way to the bank on this one. Which, I must add, I don’t fault them for. Marketing this very simple game with Star Wars and Angry Birds is like putting Peanut Butter and Jelly together between two slices of bread made of gold, but this is starting to be an overplayed fad. Consumers can’t eat PB&J forever, regardless of its golden bread goodness. But until the market gets full and looses interest, some serious money is being thrown at the birds and pigs.

Angry Birds Star Wars Jenga Hoth Battle Game is not much of a game. I understand I am viewing this from an “adult” perspective, but there is very little substance to be had here. Build what the die shows and knock it down. Very simple, repetitive  and what I would consider boring. And yet, it seems to be the bee’s knees for the little geeks. Either I am not seeing the game for what it really is or I have officially become old. I appreciate the fact it requires my little geeks to build something, but they get more out of their LEGOs then this. I also appreciate they have to think about how to knock the blocks down, but I have yet to see any Parent or Child Geek give the bird toss much thought.

As far as game play goes, I’m unimpressed. My little geeks tell me I “just don’t get it”, but perhaps you do, and I’m pretty sure your little geeks would like this game, too. Clearly not one made for us Gamer Geeks or anyone who is looking for a game with meaningful game play and depth. For the Child Geeks, Angry Birds Star Wars Jenga Hoth Battle Game is superb.