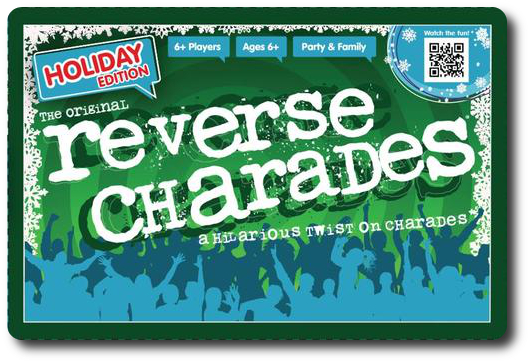 Now you can play a rousing game of Reverse Charades and be festive with the season! This jolly expansion introduces new words to challenge the players that cover Thanksgiving, Christmas, Hanukkah, New Years Eve, and even the secular holiday bash known as Festivus. Not a single holiday trope is left untouched! Gather the family and ring in the New Year or help bolster the Holiday Spirit with this celebratory game expansion.

Party games are always fun around the Holidays. More times than note, distant family members travel to be with loved ones they don’t often get to see. Relationships are strengthened as the cranberry sauce is passed around the table and new memories are created when the parents see their children run down the stairs to gasp at what was left under the tree. And who can forget counting down the clock to ring in the New Year? There are Word cards in this expansion that cover all these events and more.

Lots of fun stuff in this expansion with words such as “Fa-La-La-La-La-La-La-La-La”, “Flight Delays”, “Ugly Christmas Sweater”, and “Ham”. The expansion also has some very challenging words in it, such as “Advent Calendar” and “Flocks”. Groups are going to need to think hard about how best to act out the more obscure holiday referenced words, but that’s also part of the fun, especially when Grandma needs to help act out the word phrase “Grandma Got Run Over by a Reindeer”. But there are more than just holiday events included in this expansion. Holiday characters are included, too. Ebenezer Scrooge, The Grinch, and even Rudolph make an appearance.

There are no additional rules and the expansion does not extend the game play. None of the new cards are inappropriate for the Child Geeks, but it is doubtful that the Child Geeks will know all of the Word cards. However, this is a moot point as the game is played with a team helping out. The only time a Word card would need to be swapped out for something easier is when a Child Geek is up to guess the word and would not know it.

Nothing to predict here. This is a game expansion and does nothing more to the base game (that all our player groups are very familiar with) than add new cards. No new tricks, skills, or tactics included or required.

The Child Geeks had a lot of fun with this one. They approved it and had a blast acting as Santa, his reindeer, and a countless score of other holiday characters. The only time they had trouble was with the songs that they had to act out. While the Child Geeks know the lyrics to many, they know the titles to very few.

The Parent Geeks also approved of this expansion and thought it was a wonderful idea to include a special Holiday Edition for a game that was sure to be played in the month of December. None of the Parent Geeks had any problems with the cards and many of them were very pleased to see multiple religious events included. According to one Parent Geek, “not only can we have fun acting out different events and traditions, but we can also talk about new ones, too.” Well, sure, but there is no talking in Reverse Charades! Still, her point was valid. Any game that introduces new and interesting concepts, be they game mechanism related or knowledge-based, is a good thing for the family and the little geeks.

Once again, the Gamer Geeks enjoyed this expansion,  but it did nothing to change their mind that Reverse Charades is a party game that does not have a Gamer Geek in mind. Oh, they still had fun. They acted as crazy as everyone else and even smiled (-gasp!-) a few times. But they did not give it their approval. What a bunch of bah-humbugs.

One of the Child Geeks had a very insightful bit of commentary while playing the game. According to this particular Child Geek, they didn’t see how this game expansion could be played if it was summer time. An excellent point. Any games themed to a season or event will automatically be less interesting to use when the game’s theme is out of context. Of course, games that are specific to seasons and events are EXACTLY the kind of thing you want to play when the timing is right. It’s a tricky line, but one that is worth crossing if you think you can make the game experience better.

Does it make the game better? No, not really. The game is still the same, regardless of the new holiday themed Word cards. Not a bad thing, mind you, but don’t go buying this expansion thinking it really “expands” anything. It “extends” the game, which I’m sure some will debate is the same thing as expand, but I don’t believe it is. In this case, which is the same with all the Reverse Charades game expansions we’ve reviewed (Sports and Girls Night In), the new Word cards can extend a player’s enjoyment of the game by adding new things to guess. The game itself hasn’t grown or changed. No new rules and no new approaches. Just more cards. Expansion? Nah. Extension. But to many, they are one and the same. Doesn’t matter either way you look at it, as the Holiday Edition expansion/extension is a fun one to add if you are looking to take your Reverse Charades or Reverse Charades Junior Edition to a holiday get-together this year.