Using unique symbols and offering players two possible matches per card, Caractor Match is an easy game and a great introduction to card games, in general. The game play is not complicated or overly challenging, making it simple to teach to young or inexperienced players. Quick and easy alternative card games are sometimes hard to find. If you have been searching for one, you can now stop.

Caractor Match, by Terran Games, is comprised of 52 cards. Each card has 2 symbols, which are referred to as “caractors”. To make it easier for the players to match the symbols on the cards, a number is also provided. The cards are nice and thick and the very durable. Additionally, the entire game, being just a deck of cards, is very portable. 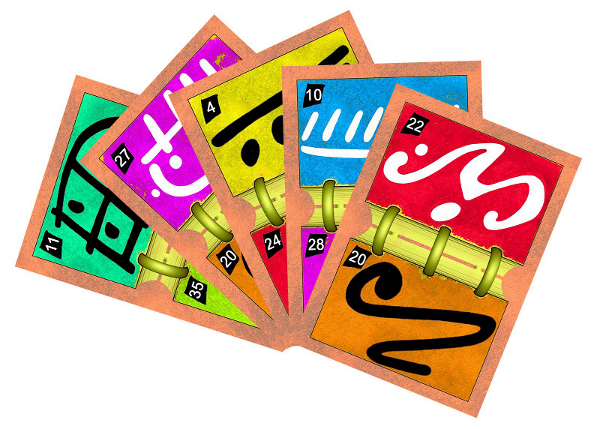 To set up the game, first give the deck a really good shuffle.

Second, deal out to each player 4 cards, face-down. Players may look at their cards, but should keep them hidden from their opponent’s at all times.

You are now ready to play! Determine who will go first and begin.

The game is played in turns. On a player’s turn, they will complete the following steps in sequential order.

The player now plays as many pairs from their hand as they can to the table. A “pair” is a matching set of symbols on two cards. The process of identifying matched pairs is made easier with the number values that are associated with each of the symbols. There is one card in the deck that has a “wild” symbol that can be paired with any other symbol. The wild symbol has the letter “W” next to it instead of a number.

Note that the pairs that are played to the table will have symbols that do not match on them. This is fine as long as one symbol on each of the cards do match. Additionally, players cannot create a pair using their opponents’ cards.

This is an exceptionally easy game. The rules for it fit on the back of one of the cards (literally). There is little in the way of complex strategy or need for tactics, and a player’s turn is pretty straight forward. I don’t believe this game will be a cause of confusion for any of our players, even those who are color blind. Thanks to each symbol having  a number that can be matched with its pair, any need to identify colors (or even symbols) is made unnecessary. While I think this game will go over well with the families, I don’t see much in the game that will tantalize the Gamer Geeks.

Teaching the game takes all of a minute. Again, this is not a complicated game, nor was it designed to be so. Both of my older little geeks understood the game’s play and objective with no questions asked. And so, as I handed the deck to my 5-year-old to shuffle and deal, I asked them their thoughts on the game so far.

“Looks like a really easy game where all I need to do is collect cards faster than you.” ~ Liam (age 8

“I don’t understand the squiggles, but I know the numbers!” ~ Nyhus (age 5)

Let’s play the card game and see if it was worth the trouble of shuffling.

The Child Geeks who played this game very much enjoyed it. For them, the game played quickly and was easy to manage. The only issue we ever had while playing with the Child Geeks were the large card hands they could sometimes collect. Players have the option of taking all the cards in the discard pile, which can be a lot. This slowed down the game a bit as their little fingers tried to organize their cards and find pairs. While not a fault of the game, it became a source of frustration for a few of the younger Child Geeks as their cards kept slipping from their small hands. Overall, the game was very well received and the Child Geeks were most pleased to play it again when the game was finished. Best of all, this is a card game that can be played by the younger Child Geek crowd. No reading is necessary, and what little math is involved can be assigned to an older player without disturbing the game play or balance. This is also a game the Child Geeks can set up and play on their own with little to know Parent Geek supervision. A huge plus when the Child Geeks want to play a game, but the Parent Geeks are busy doing boring adult things. 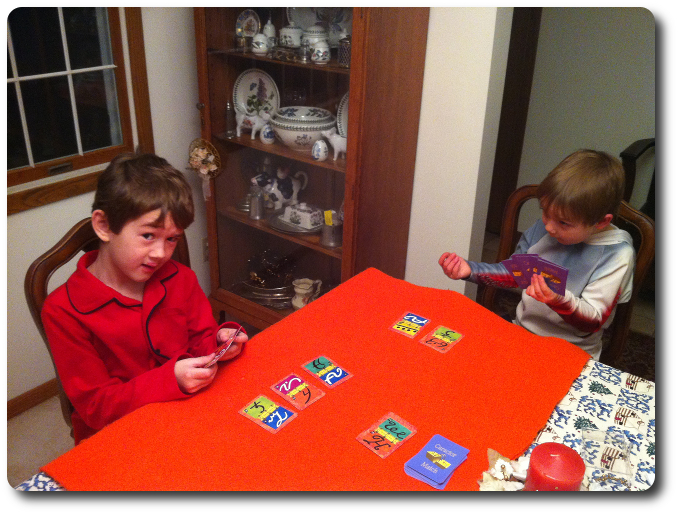 The game is fast, but not fast enough for my 5-year-old who keeps telling his older brother to “hurry up”

Parent Geeks didn’t care for this game among their peer group. There is very little in the way of thought required to play the game, although all players do need to watch what cards are being placed in the discard pile per turn. All a player needs to do at minimum is draw as many cards as possible, make as many pairs as possible, and then wait for their next turn. Parent Geeks said they found this rather boring and not at all engaging. When playing with their family, especially their Child Geeks, they found the game play experience more enjoyable. They still didn’t think the game was all that interesting, but they could not deny the fact that it was a fun and light game to play with their family. As such, the Parent Geeks approved it.

Gamer Geeks very much disliked the game. They didn’t see anything of value or perceive any challenge in it. One Gamer Geek said the most difficult part of playing the game was staying awake. While his statement was blatantly facetious, it was a common sentiment shared among the Gamer Geeks. Without challenging game play or even the ability to play off another player’s good fortune, the Gamer Geeks decided this was not a game made for them or worth their time.

Caractor Match is a very simple game. Simple, but a good one to play with the kids and with the family. I wouldn’t suggest the game is a good one for adults, however. Even though the game is exceptionally casual, there isn’t much to the game itself. Drawing cards, matching them, and then playing them to the table is easy to teach, but not fun to play as an adult. There is nothing to challenge the mind. There is also nothing in the game that allows you to directly compete with the other players. This makes the game, essentially, a race in a vacuum. The first player to complete the number of required pairs to win the game only did so because they had the luckier cards, not because they were more skilled or somehow outwitted their opponents.

Games like Caractor Match, while of no interest to me, are perfect for the family to play with little geeks. The game helps strengthen a player’s ability to match patterns, numbers, and illustrations. The game is casual, allowing for easy play, and won’t demand any player’s attention to a degree that would suggest complexity. Perfect for quick games on a rainy afternoon with the kids, but not much else.