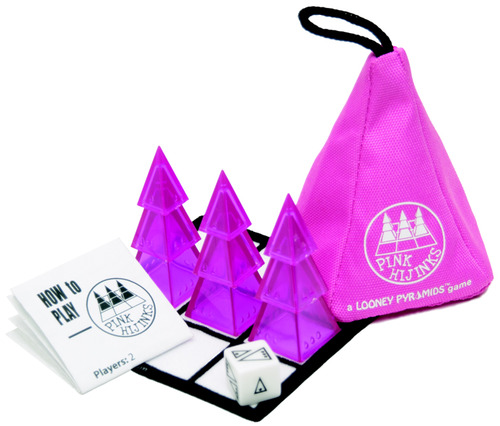 Finding a good puzzle game that can be played by the family without giving some players a district advantage is downright difficult. Often, puzzles require levels of mental capacity and ability that little geeks do not yet have. This makes puzzle games seem fairly one-sided and altogether impossible to play with a family. So how does one level the playing field, so to speak, and still give the players a puzzle to solve? The answer is very simple and terribly random.

Pink Hijinks, by Looney Labs, is comprised of 3 pink Pyramid trios (3 sets of 3 Pyramids in sizes small, medium, and large, for a total of 9), a six-sided IceDie, and a cloth 3×3 square grid. Everything fits in a very small pyramid shaped bag which makes the game highly portable and a snap to put away.

To set up the game, first remove the contents of the bag.

Second, place the 3×3 grid between the two players.

Third, on the 3 spaces in the middle of the grid, build 3 “trees” with the Pyramids. A “tree” is a set of 3 Pyramids (small, medium, and large) with the large Pyramid on the bottom, the medium in the middle, and the smallest on the top.

Determine who should go first and pass them the die. 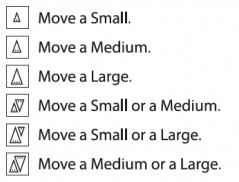 Pyramid pieces can always move in an orthogonal direction (never diagonal) to a square on the grid that is empty. Pieces can also stack, but only on pieces that are the same size or larger. Additionally, when a piece moves and it has pieces stacked on top of it, all those pieces move at the same time.

Lastly, the game grid has a “home row” that further restricts Pyramid movement. The home row is the 3 squares directly in front of the player. Players can move pieces into their opponent’s home row, but once the pieces have been moved there, only the player who owns that home row are allowed to move those pieces.

There are two ways to win the game. The first is to fill your home row with 3 of the same sized Pyramids with no other pieces above or below them. The second is to place all 3 Pyramid trios (the “trees”) on your opponent’s home row.

To learn more about Pink Hijinks and read the full rules, visit the game’s web site.

I predict this game will be successful with the Parent and Child Geeks, but meet with total failure with the Gamer Geek crowd. Why? This game is essentially a roll-n-move puzzle solver. Forcing a player to only move the pieces randomly rolled on a die (and then re-rolled if no move is possible) is going to be like nails on a blackboard for the gamer elitist. This type of game mechanism also removes a lot of strategy and tactics a player could use to win the game. However, because the player is limited with their moves, making each move very important, a great deal more emphasis will be put on logical and critical thinking. I’m betting we’ll see some bluffing and intended misdirection, too, from the more seasoned players.

Teaching the game doesn’t take long and it is really one of those games you can set up, hand the dice to a new player, and teach the game as you go. Not much to really tell a player other than the objective and what to do when they roll the die. Pretty simple. And so, as I set up the game for my little geek and I to play, I asked him his thoughts on the game so far.

“I like the pyramids, although pink is not a great color. I need to play it before I can tell you for sure, but so far, I don’t see anything I don’t like.” ~ Liam (age 8)

I don’t see anything terrible, either, but I’m also not seeing anything I like. Let’s play the game and see if it’s a keeper.

For the Child Geeks, this game worked fairly well and they approved it. I think, however, they mostly approved it because it was a puzzle game they could play with adults and win thanks to lucky die rolls. The game also frustrated them for the same reason. The dice will either love you or hate you in this game, and there were a few times that Child Geeks growled in frustration or whined that their opponent was getting all the “good rolls”. In the end, however, regardless of the Child Geek’s level of frustration, they rather enjoyed it for its easy game play and game bits. The puzzle aspect more or less went over their heads (they just kept moving Pyramid pieces until someone won), but that didn’t seem to matter to the overall game playing experience. A Child Geek as young as 5 could play this game, but the only Child Geeks that stuck around long enough to play and finish the game were 8-years-old and up. 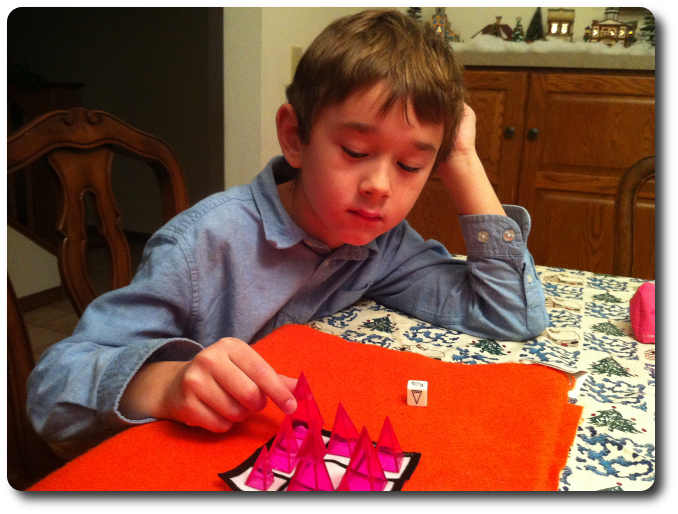 Parent Geeks didn’t care for this game when playing it with their peers and thought it rather silly to suggest a puzzle could be solved with random dice rolls in a reasonable amount of time. They did enjoy the game, however, when playing it with their little geeks. In fact, the game would most certainly be rejected by the Parent Geek crowd if it weren’t for the enthusiasm the Child Geeks showed while playing the game with them. And on that note, it was highly approved as a puzzle game that took some thought, but was easy to play and to think through with young family members.

Gamer Geeks, as predicted, did not like this game whatsoever. One Gamer Geek summed it up by saying, “this is a roll and move puzzle game that is forcing me to move pieces I do not want to move.” Another Gamer Geek said, “I prefer Candy Land“, which is actually very profound. Clearly not a game intended for gamers who are looking for a deep, engaging, and meaningful gaming experience.

Personally, I don’t care for the game. I like the concept, but not the execution. A puzzle game is something that I should be able to solve in a creative way. There is no creativity or freedom in this game. Your choices are limited to and dictated by a random roll of the die. It doesn’t matter if victory is a single Pyramid piece away. If you don’t roll it, you don’t move it.

While playing the game, I never felt like I was solving a puzzle. Instead, the entire game felt like an exercise in jockeying for position until one player was forced to make a bad move and I was lucky enough with my die roll to take advantage of it. I think the game would have been much better if the die was removed and a rule was added that stated players could not move a piece that was moved in the previous turn. But I must also admit that the die makes certain (most of the time) players just don’t end up deadlocking themselves with repeated back-and-forth game play. Unfortunately, the price we pay to avoid this is lack of meaningful player choice.

However, if you are looking for a puzzle game where a roll of the die determines what you can (but more importantly) cannot do, then take a look at Pink Hijinks. It’s small, portable, and plays in minutes. Perfect for when you need a quick game that can be played without much thought or effort.