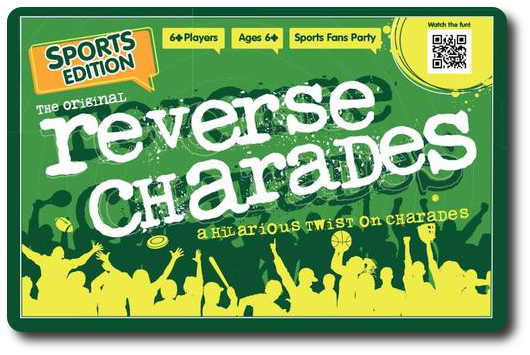 Sometimes you just can’t stop thinking about the “Big Game”. It consumes your thoughts at work, at the kitchen table, and even your dreams. If this sounds familiar, consider yourself a “Sports Fan”. Now you can take your enthusiasm and zealot like fanatical love for sports to a whole new level by acting out famous athletes, sports equipment, and sports-themed songs! And on a personal note, it is awesome to see Curling included as a “sport”!

Sports fans rejoice, as this is a game expansion that is truly all things “sports”. Teams, rodeo clowns, rock anthems, and even jock straps are included in this expansion. Even Karate is represented with a card that gives a very visible nod to the movie, Karate Kid, with the phrase “Wax On, Wax Off”. But there are also some cards in the expansion that any true sport enthusiast will raise their eyebrow to. For example, “Planking” and “Juggle Knives”, which I guess could be a sport, but not one I’d want to participate in. Although, I would watch it.

The set has something for everyone, from Chess to Calf Roping. But a player need not be a sports fan of anything to play using these cards. The fun comes in acting out what the Word card states. For example, one of the Word cards has “Body Odor”. You can imagine the fun a group would have with that word! There are also some complicated words, too. For example “Carb Loading”. Not really sure how you would act that one out.

There are no additional rules and the expansion does not extend the game play. None of the new cards are inappropriate for the Child Geeks, but it is doubtful that the Child Geeks will know all of the Word cards. However, this is a moot point as the game is played with a team helping out. The only time a Word card would need to be swapped out for something easier is when a Child Geek is up to guess the word and will have no clue what the word is.

Nothing to predict here. This is a game expansion and does nothing more to the base game (that all our player groups are very familiar with) than add new cards. No new tricks, skills, or tactics included.

Child Geeks approved this expansion and had a great time acting out the sports activities listed. Their favorite was, by far, the “Jock Strap”, which pretty much made every mother blush. While it didn’t challenge the Child Geeks to any new degree, they still had a blast. Most of the Child Geeks said this was their favorite expansion for the game and wanted to keep using it in the future.

Parent Geeks were also pleased with the game and didn’t find anything in the cards to suggest any of the words were inappropriate. But as mentioned, some of the words made the Parent Geek moms blush a few shades of red. It was all in fun, however, and there was much laughing had by all. A few of the Parent Geeks were concerned that a “sports themed” expansion would automatically exclude individuals who were unfamiliar with sports, but this proved not to be the case.

Gamer Geeks did enjoy this expansion but still found Reverse Charades (regardless of the expansion’s theme) to be a party game, and not one that is particularly geared towards the more “serious” play of Gamer Geeks. Still, they said they enjoyed it and would be happy to play the game, but only when gathered with friends and family. This is a game meant to be played in a party setting where the playing area is surrounded by couches and not on large gaming tables surrounded by elitists gamers.

I found this to be an entertaining expansion. It introduces words that are a lot of fun to act out and it was easier for a group to work together because many of the Word cards suggested an action. Because of the stronger feeling  of synergy I felt while playing with my friends, I had a more enjoyable time playing the game. So far, this is my favorite expansion for the base game and one I will most certainly be keeping. While the expansion brings nothing new to the game, I did feel that the game play was more entertaining, more energetic, and easier for groups to work together. That’s a pretty big plus for a little box of cards.