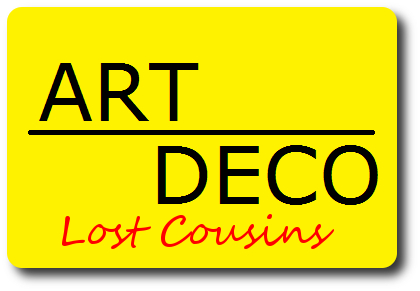 “STOP!” yells a voice from the back of the room. The entire family turns to look at two individuals who have just interrupted the lawyer’s reading of your Great Aunt Hattie’s Will. “The Will you are reading is incorrect! I have here an amendment sent to me no less than a week ago!” The strange man hands a letter to the lawyer, who looks it over with a furrowed brow. “I see,”  says the lawyer. “So we are to believe you are long-lost relatives?” The strange man takes the letter from the lawyer and smiles as he says, “Incorrect, my good sir. We are no longer lost. Where shall my sister and I sit?” Great. More family…

Art Deco: Lost Cousins, by Terran Games, is comprised of 25 cards that depict various Art Deco illustrations made popular in the 1920′s and 7 standard twelve-sided dice. All of these components fit easily in the base game’s aluminum case. Note that Art Deco: Lost Cousins is a game expansion and requires Art Deco to be played. This expansion increases the total number of players from 5 to 7 and includes new rules for the Wild cards. We suggest you read our review off Art Deco before reading any further if you are not familiar with the base game.

The game set up using Art Deco: Lost Cousins with the base game is very nicely summarized on the back of the expansion’s rule book. We will summarize the summary here.

That’s it for game set up. The big change is how the Wild cards are used.

If the player uses the Wild card to grab another Wild card from the discard pile or keeps it to score, the acquired Wild card is placed with the other cards the player has previously acquired. Instead of being placed face-up, however, Wild cards are placed face-down like a doubled-down card. This is a free action and the player does not pay to double-down the Wild card.

When it comes time to score points, every card in the game has a colored icon on its back. These icons are the same as those found on the Art Deco cards when they are scored and are usually ignored unless the card is a Wild card. The icon’s color on the back of the Wild card identifies which color the Wild card belongs to. The Wild card is placed in the row with other cards that match its color when organizing the cards for final scoring. When scored, Wild cards remain face-down and are tilted on their side (sideways) in the card row. Wild cards are scored as follows.

The only other important item to note about the cards included in the expansion is that the new Art Deco cards have point values that range from 9 to 12 points.

Nothing to predict here. While the game expansion does add more players and a new way to use Wild cards, the overall game play has not changed. I doubt very much the endorsements from our three groups will shift with the expansion in play.

The answer to that is a very simple one. “It depends.” What it depends on is three very important points the game expansion hopes to address that might or might not be important to you. The first is the total number of players allowed to sit in on the game. The base game only allows up to 5 which I would guess fits the needs of most families or a couples’ night with some fellow gamers. The expansion increases the total number of players to 7, which can now include not only the average family, but two other relatives, as well. That’s pretty cool. You can also now play the game with up to three couples and one lonely friend you invite to parties because you feel bad for them.

The second is making the Wild cards more useful and tempting. With the expansion, Wild cards are now potentially very powerful as a game changer, making the bids on them highly and hotly contested. Of course, that also means the game’s level of competition increases and the overall complexity of the game has a slight uptick. Not that you’ll notice, however, as the new Wild card rules fit seamlessly into the base rules. None of our players had a problem adopting the new rules and playing them to achieve advantages over their opponents.

Third, the game is now longer with higher endgame point averages. Longer, but not any more difficult. The game plays just as fast and any noticeable increase in the game’s length with be counted in minutes, at most. This is actually a big benefit for some of our groups as they thought the game ended a bit too quickly at times. The increased number of cards gives those players who are having difficulty getting their feet underneath their game some much needed time to get up and running.

Taking all of the above into consideration, I think Art Deco: Lost Cousins is an outstanding expansion. It adds a new way to get points, is easy to introduce, doesn’t put additional burden on the game or the players, and allows even more friends and family to enjoy it. That’s all great news for a game that is already fun to play. I would highly suggest this game expansion to any person who was already familiar with Art Deco. As for me and mine, the game expansion has been fully integrated with the base game and will never be removed.