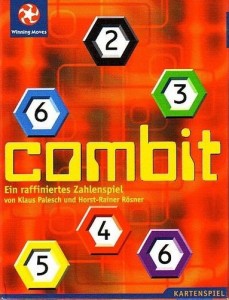 I picked up this game in a trade, expecting that my 6 year old son would enjoy it. It is the original German edition of a game later published in English under the name Ka-Ching! (Fortunately, an English translation of the rules was provided.)

Combit is an abstract card game for 2 players. There are 35 cards in 5 colors, with values ranging from 2 to 6, as well as 2 Jokers (black 2s). The 35 non-Joker cards are arranged in 5 columns of 7 cards each. In addition, there is a separate deck of cards that represent cash. Each player begins the game with one Joker and €20.

Players alternate turns. On each turn, a player either buys one card or sells two cards.

To buy, the player takes the topmost card in any column in exchange for cash equivalent to its face value (e.g., pays €2 for a 2 card, €3 for a 3 card). The purchased card is placed face up in front of him.

The game ends as soon as there are only 2 columns of cards remaining in the tableau. Each player makes one last sale (if possible), then the player with more cash is declared the winner.

My son loves mathematics, which is why I chose this game for him. He enjoys showing off his basic arithmetic skills and this game gives him a chance to do that in a competitive setting. The strategy appears fairly simple, with higher-value cards costing more but providing a bigger pay-out also.

Reminiscent of games like Zooloretto, taking any card gives your opponent first crack at the card immediately beneath it. Although this often features in designer games, it does add to the learning curve.

Combit was very well received by my six year old son; my four year old daughter is not quite ready to play it, so I have not tried it with her yet. I was very impressed by his maths skills, particularly in making change (one of those abilities that adults often take for granted). His first exposure to handling money was in the game Vegas Showdown just 7 days earlier, and he has learned very quickly indeed.

He had more difficulty recognizing the danger of exposing a desirable card only to have your opponent buy it instead. If you are uncovering a card you would like to purchase yourself, you had better be sure that your opponent either cannot afford it or has no interest in buying it. Even if it does not benefit him directly, it might still be worth it to deny you a massive profit. (I discussed this in my review of Portobello Market, but it is especially true in a 2-player-only game.)

For example, if your opponent has the 5 of one color, denying him the 6 of that color will reduce his profit by at least €8: the next highest card is a 4, so instead of selling for €30 (a profit of €19), he could at best sell for €20 (a profit of €11). So you have just spent €6 to deny your opponent €8, which is €2 to your benefit. Then again, could your turn have been better spent purchasing a card you really wanted for yourself? Now, if the 4 card has already been used, or if you suspect that it is not going to purchased at all this game (perhaps because it is at the bottom of a stack), then stealing the 6 will look more attractive than a “measly” €2.

For this reason, the game can generate zugzwang-type situations, in which neither player wants to buy a card, for fear of conceding a really good card to the opponent. This is where it is handy to have some pairs of cards ready for sale, as much for “stalling” as for profit-taking.

Cash is hidden, but purchased cards are open: the reverse of what happens in many games. I think playing with open money allows for a more strategic game, where you can see when your opponent is running low on money. Besides, my children have better memories than I do!

All in all, this is a good filler game for early school age children. Given that there is not much depth to it, I suspect that after about 6 months we’ll put this one away until my daughter is old enough to play it. 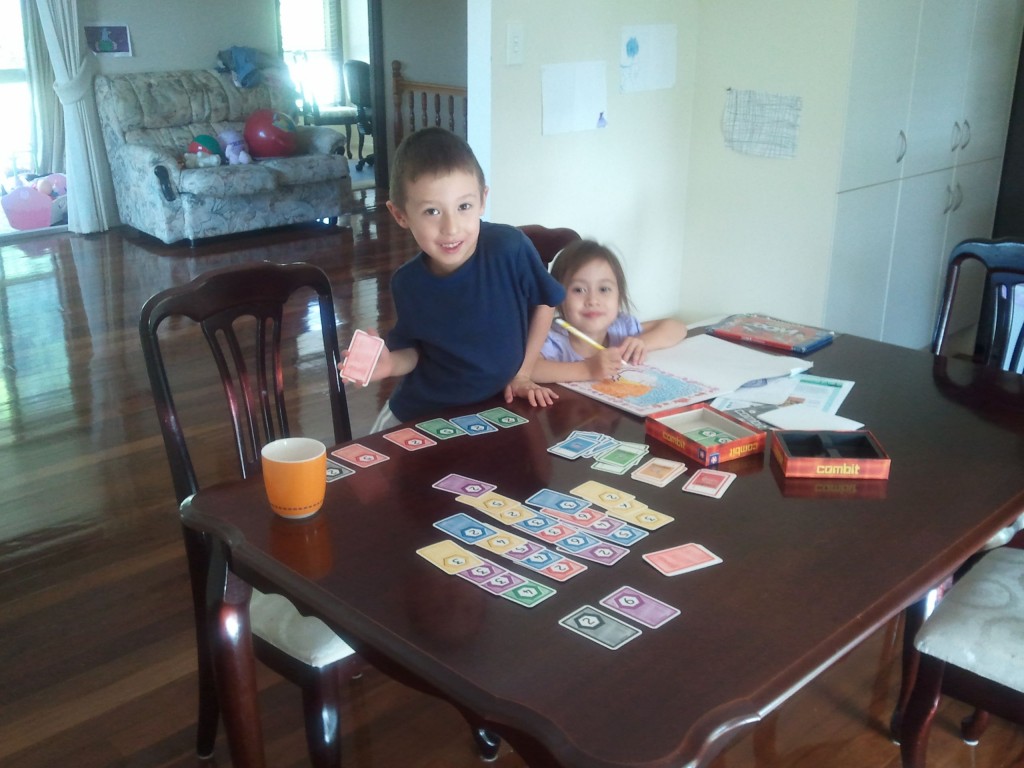