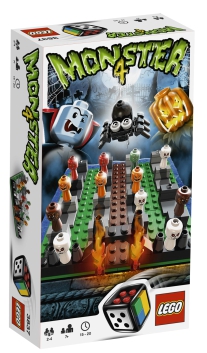 In Monster 4, each player is attempting to place four of their monsters in a vertical or horizontal row before the other player’s do. The game is fast, fun, and provides a good introduction to logical and critical decision making, as well as strategy and tactics.

The game, like all LEGO games, is comprised entirely of LEGO pieces that you must build before you play. The rules to build the game are easy to follow and provide a fun opportunity for you and your little geeks to work together. Expect about 10 to 15 minutes to build the game from scratch. After that, only minor corrections are needed to reset the board for game set up.

The game, once built, is comprised of a board that represents a graveyard, complete with tidy rows of headstones, a graveyard gate (with ominous flames), and a tidy walking path down the middle. There are four zones to the graveyard. Each zone contains four graves of the same color (light and dark gray, respectively).

Game set up is fast and easy. The only pieces that need to be set are the 16 player pieces (four per player) and the four Skeletons. The player pieces represent the Werewolves, Goblins, Vampires, and  Jack-O’-Lanterns that frolic in the graveyard at night. The Skeletons are placed on the graveyard wall and the player pieces are grouped together on small piece holders. The Big Spider is set aside from the board game and in easy reach of all the players. The game is now ready to play! Pass the dice to the first placer and start the game! 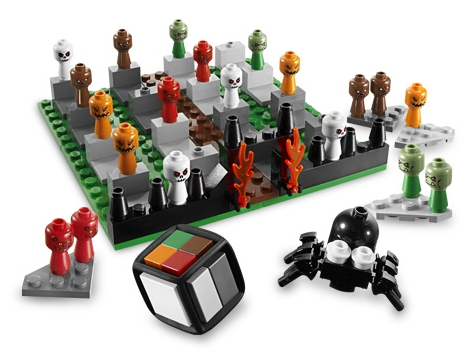 The rolled results allow the player to complete one of the following actions:

When Light Grave, Dark Grave or Any Color are rolled, the player can place or move any of their game pieces to a grave of that color. This means pieces currently on or off the board. The same applies to Graveyard Shift, but instead of finding an empty grave of the color rolled, the player can choose any grave and remove the current game pieces that is located there, except for Skeletons.

The Skeletons act as Jokers or wildcards in the game. They occupy a grave and count as a monster for every player. This means a player could win with as little as 1 monster in their row if the other three monsters are all Skeletons.

The Big Spider jumps from zone to zone in the graveyard. When it lands in the zone, all the monsters, except Skeletons, are removed from that zone and returned to their owning player. Skeletons are never scared by the Big Spider and only move from a grave when a player moves them. However, the Big Spider only scares monsters once per zone. A player can place or move a game piece to a zone currently occupied by the Big Spider without fear of being startled.

The rule book provides the following three suggestions of how you could change the game. These rules are optional and the players are encouraged to create their own rules, too.

I predict this game will be a fun time for my little geeks. First, they love playing with LEGOs and already spend hours simply building anything and everything with them. Second, they greatly enjoyed Minotaurus, which continues to get ample table time at my lair. Third, the game is visually appealing. How can you go wrong with a graveyard full of little monsters? Fourth, and finally, the game is light and easy to learn.

My only concern is the die that is used in the game that randomizes what actions you can take on your turn. I take that back…this is a major concern. Leaving decision making to randomized results on a die can be frustrating, especially if the die rolls do not seem to be going your way, repeatedly. We have already experienced this with Feed the Kitty and especially Zombie Dice.

What were my little geek’s thoughts on the game after we built it and I explained the rules?

Let’s get rollin’ in the graveyard!

My little geeks and I are really getting into the LEGO Games. They are a lot of fun to build as a group and then play the game at the family table. Like Minotaurus, we also enjoy adding our own rules to the game, changing the board with new LEGO pieces, and adding new rules and challenges that we think will make the game more entertaining.

Monster 4 was a graveyard smash (see what I did there?) with my little geeks and I. Yes, the game play is very straight forward, but there is just enough “thinking” involved to make the game engaging and exciting. This was a surprise when we again consider that a randomized die roll result determines the player’s action.

While the die does limit you to what you can do, it also limits what the other players can do, too. “Duh”, I know, but this created a wonderful equalizer in regards to game skill. I had no doubt that I would be able to play better than my little geeks simply because of my previous game experience and better grasp of strategy and tactics. Even with all that in my back pocket, I was still limited to what I could do on my turn by the dice. This allowed my little geeks to not only keep up, but many times, dominate the game if the dice where not allowing me to play what I needed to win the game quickly. 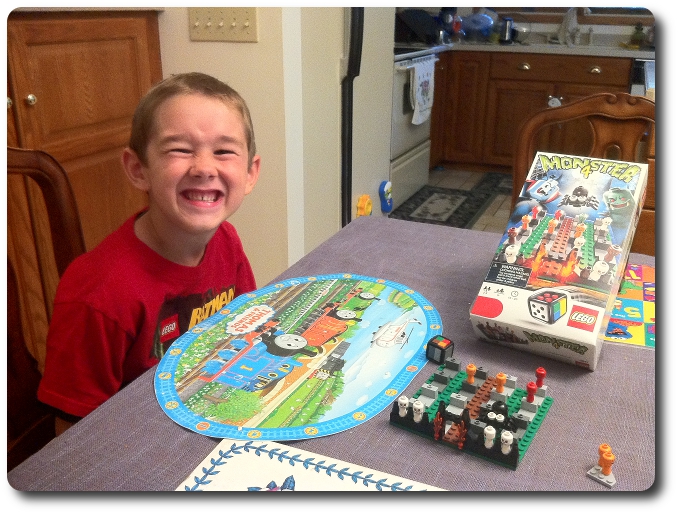 My little geek and I love to throwdown in the graveyard! Afterwards: APPLE JUICE FOR EVERYONE! Why is he smiling so big? He won 5 games in a row! I’m so proud *sniff*

It is easy to interpret this type of game mechanic as a major fault as it appears to remove player decision making. However, because a player can place or move one of their pieces, this creates a constant shifting landscape on the board where you have to stack the odds in your favor. There is also the Big Spider that has a limited effect range, but is universal to all player pieces. This means that sacrifice is often required in order to get a “leg up” on your opponents. Again, an interesting “equalizer” added to the game to keep it balanced. 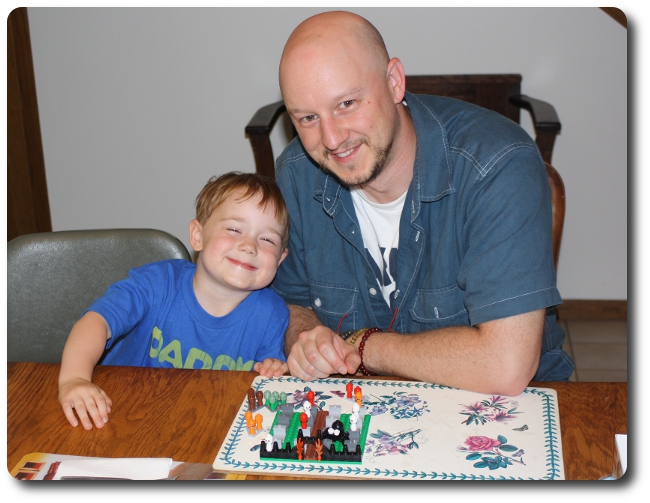 Even my 4 year old had no problem playing the game! Yes, he beat me, too.

In short, the die will not let one player run away with the game nor does it control it. The board pieces often shift opening holes of opportunity for players who recognize it. While the die roll determine what you can do on your turn, the player still gets to decide how they will do it. And, as it turns out, that is what makes all the difference in the world.

Monster 4 is fun and light. The game is fast paced, well balanced, and streamlined making it easy to teach and exciting to play. We have played it with four people, which can be very chaotic. We suggest 2 players, or 3 at max, for optimal game fun.