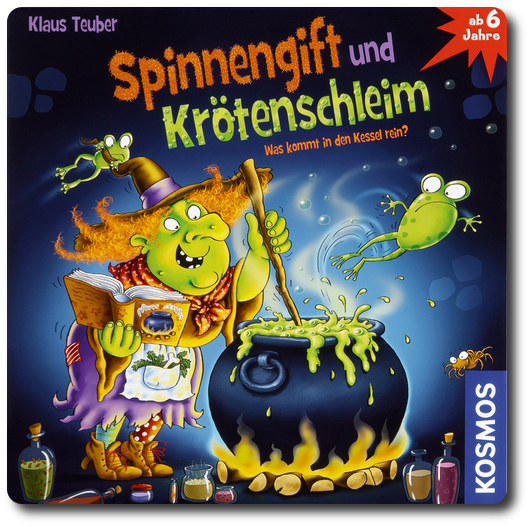 Spinnengift und Krötenschleim (Spider Venom and Toad Slime), by Kosmos and designed by Klaus Teuber of Die Siedler von Catan fame (aka The Settlers of Catan), is a children’s game and Kinderspiel des Jahres nominee for 2012. A mischievous goblin has turned the witches’ kitchen topsy-turvy, so that now the witches cannot find the ingredients they need for their magic monster-summoning brews!

The magic chips are placed randomly in allocated spaces on the board. Each player places their witch figurine next to a magic chip of value 1. The ingredient tiles are shuffled face-down and placed around the periphery of the board. Six of these tiles are turned face-up so that players know where some of the ingredients or goblins are. One of the monsters, chosen randomly, is placed into the magic cauldron.

In clockwise order, players take turns trying to correctly locate 1-5 ingredients, corresponding to the value of the magic chip their witch is standing next to. This is done by rolling the die, then turning over one ingredient tile to match the result of the die roll. If successful, the die is rolled again and another tile is turned over, until the requisite number of consecutive successes is achieved or until an incorrect tile is turned up. If the player turns over a goblin, it’s a double whammy: not only does their turn end, but every other player collects one recipe token.

If the player is successful in identifying the required number of ingredients, they collects 2 recipe tokens if they completed a full series of 5 ingredients, or just one recipe token for completing a series of 1-4 ingredients. The player also collects the magic chip and places it into the magic cauldron. Depending on which monster is in the cauldron and how many other chips have already been inserted, this might cause the monster to be pushed through the bottom of the cauldron. If so, the active player claims the monster piece as an additional victory point, and another monster is placed in the cauldron.

If the player’s witch is not standing next to a magic chip, or if the player prefers to move to a chip with a different value, then the witch can be moved one or two spaces before attempting to find ingredients. At the end of their turn, successful or not, the ingredient tiles are turned face-down again in preparation for the next player’s turn.

So, when all is said and done, this is a memory game. To be sure, a memory game with lots of bells and whistles and a wacky (by which I mean cool) theme, but a memory game nonetheless. This is hardly a criticism: my children love memory games, from classic Memory to Chicken Cha Cha Cha. The choice of ingredients is very cute and should appeal to young children. However, I doubt that the game has long-term replayability for children older than 6 years.

Unfortunately, I was a bit careless when separating the ingredient tiles from the die-cut countersheet, so that two of them have “marked” backs. Such inadvertent damage is the bane of all memory games, as players quickly learn to identify these tiles reliably. Once noticed, it is difficult, if not impossible, to ignore these marks and play as though they have not been seen.

My children (5 and 7-years-old) clamored to play Spinnengift und Krötenschleim over and over. They were especially tickled to talk about the stinky mushroom and the mouse droppings (also known as rat poo). If certain items were discovered to be close to my side of the table, they would tell me delightedly that I must have been eating these disgusting condiments. My son soon learned to go for the high-risk, high-reward strategy of trying to collect the 5-value magic chips, enjoying the challenge as much as the additional victory points. Gameplay is more tense than I had expected, not only as the identity of the ingredient tiles is discovered, but also in waiting for the monsters to fall out of the cauldron. They were on the edge of their seats the entire time, watching intently as each tile was turned over and as each chip was inserted into the cauldron, squealing with excitement with every success and failure. 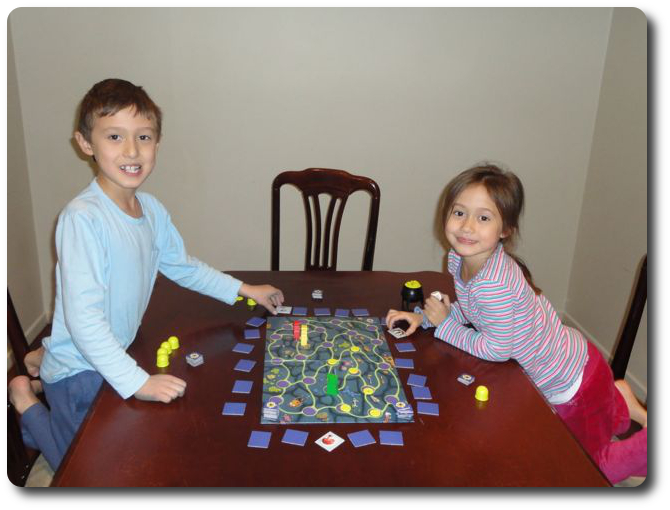 It’s more fun than being in a real kitchen!

Gamer Geeks will be disappointed from the outset that, even with the added layers, there is not much meat on these bones. That is hardly surprising for a Kinderspiel des Jahres nominee. Choosing which magic chip to try for and which part of the board to play in are not difficult decisions.

Parent Geeks will consider the cartoon artwork and silly theme suitable for children, even though slightly disgusting. Moreover, Spinnengift und Krötenschleim, like other memory games, is a great opportunity for children and adults to compete on an even footing. Just don’t expect the games to be quiet affairs! The many ups and downs encountered during play give parents the chance to advise their children how to deal with disappointment, how to celebrate others’ success, and also not to take too much delight in others’ misfortune.

Child Geeks will agree with my own children that this is silly and fun, and what more could they ask for? This is as much a toy as it is a game, and there is no denying the excitement for younger players.