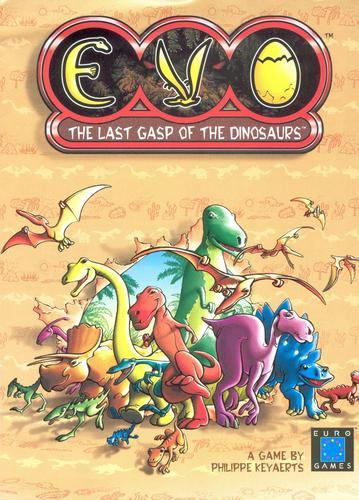 In Evo, you control a breed of dinosaurs competing with the other player’s breed for dominance, which is determined by how prolific your species is.

You start the game with a number of wooden dinosaur discs in your color, some special event cards, and a player board depicting your dinosaur and any genetic mutations you’ve collected.

The game board is an island made up of different terrain types (desert, grassland, hills, and mountains) and your dinosaurs (the wooden discs) occupy these spaces.

There is also a climate board off to the side that shows you which spaces are habitable, which are too hot or too cold, and which are completely uninhabitable. The climate usually changes every turn, so you have to keep your dinosaurs on the move, constantly migrating from habitable zone to habitable zone, in the hopes that you end up with more survivors than your opponents.

Around the climate board is a turn track where a comet token advances closer and closer to Earth, as well as an initiative track to manage player turn order.

In addition, there is a score board that has a scoring track (where the spaces are much too small for the player’s score tokens to fit) and a bidding area in the center where players will bid for genetic mutations for their species.

The artwork throughout the game is colorful and charming, and the pictures on the event cards are light and humorous. The wooden components are big and easy to handle. My only gripe with the game components is the scoring track and the little wooden dowels you’re supposed to use on it. The spaces on the track are so small only one dowel can fit on it at a time, standing on its end. That would be bad enough, but the dowels are so skinny they fall over at the slightest bump and, being round, roll all over the place.

A single game round has several phases, beginning with a roll of the die to determine the climate for that round. This is followed by players taking turns moving their dinosaurs around the game board and fighting whenever they meet up. Then, each player in turn hatches baby dinosaurs (adding more of their dinosaur tokens to the game board), and determines which of their dinosaurs survive to the next round. The dinosaurs that are in hot or cold zones might die off, depending on the particular genetic traits of that species. Players score one point for each surviving dinosaur left on the game board.

After the dinosaurs survive (or not), the comet marker advances one space closer to Earth. Towards the end of that track, some of the spaces have die roll results on them. When the comet enters those spaces, roll the die, and if the result matches the results on that space, the comet hits the Earth and the game ends immediately.

If the comet doesn’t hit, the game moves on to the next phase, where players bid for genetic mutations for their dinosaurs. There will be a small number of these mutations available to you and your opponents, and you bid victory points to get the ones you want. The different mutations allow your dinosaurs to inhabit more cold or warm zones, move further on a turn, fight better, lay more eggs, go first in the round, get future mutations cheaper, or just let you draw more event cards.

The event cards are a chaotic element in the game that might bother some players. They allow the players to break the rules in unpredictable and sometimes powerful ways, like changing the climate or hatching eggs in spaces far away from their parent dinos. Using your event cards at the right time will give you a significant advantage.

Once the dreaded comet does hit, the player with the most victory points wins.

I really thought my girls would go for this game, despite the high age rating. I simplified the rules a little when I explained it to them (we ignored the event cards, for example), and I held their hands on their turns, suggesting good moves and running all the other game functions. I expected the art to win them over. The dinosaur boards you get are big and colorful with slightly silly art depicting your dinosaur, and the genetic mutations you get are cute little cardboard tokens that sort of blend in to the dinosaur picture on your board. Where you place the mutations doesn’t affect game play at all, so if you get an extra leg mutation, for example, you can have it sticking out of your dino’s chest, or head, or anything. My girls both got pretty creative with their mutations, and I thought that would be enough to keep them playing.

Unfortunately, the game wore out quickly for both my 7 year-old and 4 year-old. By the 4th round (there are around 12-15 rounds) they were asking to quit, so I let them. The artwork and components kept them interested for a little while, but I think they never really grasped the cycle of the game, with all the different phases, and that made it difficult for them to understand what was happening. And I, trying not to overwhelm them, didn’t really explain any of that, either. I just told them what they had to do at any given point. That probably was a bad idea.

Evo is a good game, and it wasn’t really fair of me to try to get my kids to play it when they’re so far below the recommended age. It isn’t marketed to kids or intended to be accessible to them. In fact, apart from the cartoony artwork, nothing about this game says “kids” at all.

But it’s still a well-designed game, and I hope to give it another try in a few years, after my kids and I have “evolved” a little.