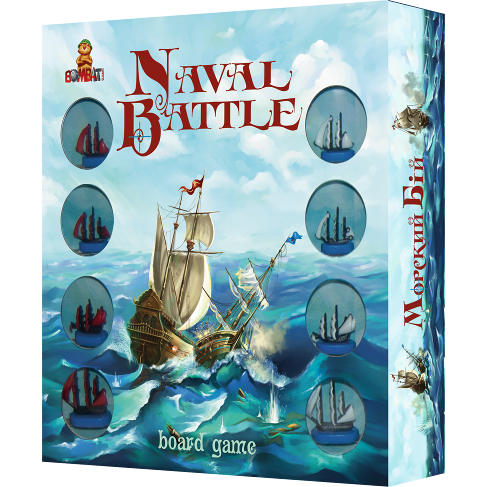 Latin writer, Publilius Syrus, said “Anyone can hold the helm when the sea is calm.” In this game, the sea is anything but calm. It’s a battleground. Each player will command a small group of ships and hunt for their enemy. Hide behind islands and ambush your foe, but pray that the wind be at your back and luck be on your side. Victory will be given  to the bold. The loser will be sent to a watery grave.

Naval Battle, designed and published by Bombat Games, is comprised of a two-sided game board, 8 plastic Ships (4 per player), and a standard six-sided die. The game board is nicely illustrated, but surprisingly thin, making it feel flimsy and a bit cheap. Unfortunately, the fancy graphics on the game board obscure guidelines that help represent what spaces a Ship can be moved into and through. This makes it difficult to play the game unless there is a lot of light. The plastic Ships come in four different types (battleship, galleon, frigate, and brig) and are of good quality. Small plastic flags are provided for each Ship if the players want to attach them, so as to provide additional detail to the sailing vessels. The standard six-sided die provided in the game did not have all of its pips colored in, making the dice look pretty cheap, too. Not included in the game, but necessary to play, is a pen or pencil and a piece of paper for each player.

To set up the game, first decide which side of the game board to use and lay it out in the middle of the playing area. The only difference between the two game board sides is the layout of land and ocean.

Second, have each player select a set of boats of the same sail color and place them on an adjacent hexagon space around their starting fort. Forts (black or red) are illustrated on the map. Each hexagon can only contain one Ship. 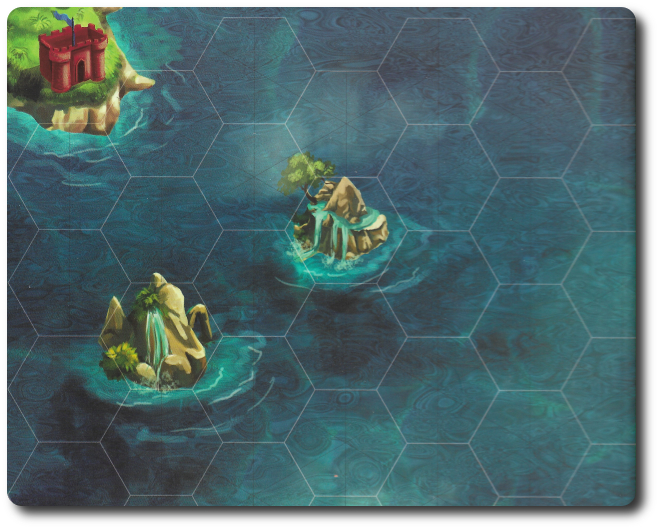 Example of map. The red castle in the corner is a player’s fort.

Third, each player identifies which of their Ships is the “Flagship”. By default it’s the Battleship, but the player can change that if they like.

Naval Battle is played in turns with no set number of turns per game. On a player’s turn, they can decide to move one, some, all, or none of their Ships depending on the dice value rolled. In addition, the player can decide if they want to fire their weapons at a nearby opponent’s Ship, or not. Movement and firing of the weapon can be done in any order, but only once per Ship. 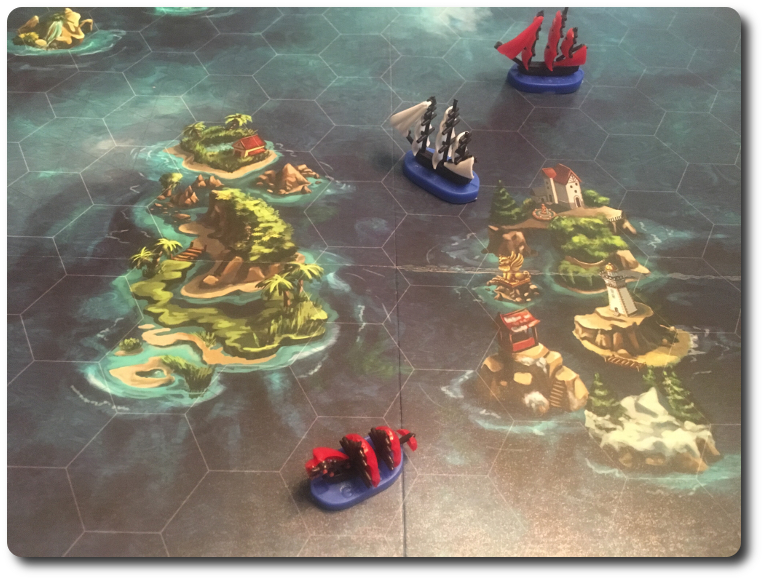 Example of a game in progress. Not looking good for the ship with white sails…

Before the player can move any of their Ships, they must first roll the die. The die value represents the strength of the wind.

The number of maximum spaces the Ships can move is dependent on their type. For example, when only the Brig can sail, the player can move it up to two spaces, but when there is a strong wind, the Brig can be moved up to four spaces. Guidelines are provided on the map that indicate what spaces the Ships can be moved into and through. If the space does not have the guidelines or is occupied by another Ship, the space cannot be moved into or through.

Ships can hide behind obstacles. Specifically, islands that are illustrated on the game board. A Ship can be targeted if a clear “firing line” can be drawn from the player’s ship to the opponent’s ship without an obstacle getting in the way. Another Ship can also block the firing line, meaning players cannot fire past one ship to get to another that might be behind it. The only exception is the Brig. It’s the weakest of all of the Ship types and is the only Ship that can fire through obstacles using a method referred to as “plunging fire”. Plunging fire, or indirect fire, allows the player to point their Ship’s cannons upward, making the shot to go over obstacles and fall on top of the target. Thematically speaking, of course.

Each player starts with a home fort. Enemy forts can be captured if the player ends their Flagship movement in a space adjacent to their opponent’s fort and there it remains for one entire player’s turn.

Flying the Flag of Victory

The younger and less experienced Child Geeks enjoyed the game a good deal, finding it fun to play a game about seeking out your opponent on the high seas. According to one Child Geek, “I like how easy it is to move your ships and sink ships!” Another Child Geek said, “I like this much more than Battleship.” The older and more experienced Child Geeks thought the game was fun but wanted more out of it. According to one of these Child Geeks, “I wanted there to be more things I could do with my ship. Like picking up treasure on an island or stealing from other ships like a pirate!” Naval Battle is not that kind of game, but it’s easy enough to create such rules, which the older Child Geeks did. When all the ships had docked, the Child Geeks agreed that Naval Battle was a shipshape game.

The Parent Geeks found Naval Battle to be of little interest when playing with their peers, but an enjoyable game when playing with their kids. According to one Parent Geek, “The game is really simple and it feels pretty basic. Not my cup of tea when it comes to games, but I do enjoy playing it with my kids.” Another Parent Geek said, “Definitely a kids game. I wish I had games like this when I was growing up.” The Parent Geeks never gravitated towards Naval Battle unless their opponent was one of thier children. Otherwise, the game was found to be too easy and too light, making it an exercise in repetitive and limited actions. The end result was a mixed endorsement from the Parent Geek crowd.

The Gamer Geeks flat-out rejected it. According to one Gamer Geek, “The game says it is for kids, so I am going to go easy on it. The game is shallow and uninteresting. I’m not saying it is a bad game in general. I’m saying it is a bad game for anyone who know how to play games that require you to think.” A scathing comment, to be sure, but the Gamer Geeks consecutively say the value of the game for the younger crowd. According to another Gamer Geek, “A good game to introduce naval combat to the youngest of players. Start them young, I say. That way I’ll always have someone to play bigger and more interesting games with.” When the games were over, the Gamer Geeks sunk Naval Battle, sending it to a water grave.

Naval Battle is simple and to the point, making it a game great for the Child Geeks but something of a mental chore for the adults and more seasoned players. This is to be expected, as the game specifically targets a younger crowd who is assumed to have a short attention span and not a lot of experience. Is that a bad thing? Goodness, no! That tells me the game designers knew who they were designing the game for and did a pretty good job of doing it. This game isn’t for those Child Geeks still struggling with Candy Land. Rather, Naval Battle is the game you put in front of young or highly inexperienced adults who are ready to go the “next level”.

While the rules of the game are too simple for me to enjoy, I did like how streamlined they were. This made combat and movement fast. The only catch here is that players are highly dependent on looking at the game board for movement guidelines (which are hard to see in anything but direct bright light) and the table that is found on the back of the game rules for combat and movement values. Not great and this made the game feel a bit cheap. There are many rules to game design. Two of them is to “make sure everything in the game is easy to identify” and “don’t have the players dependent on the rule book”. Naval Battle breaks both of these rules. A pity.

Naval Battle is an interesting game visually, but lacks depth to make the game of interest for a long period of time. Include the poorly executed game board printing that makes it difficult to see how to move and the need to refer to the rule book constantly to determine what dice values mean or what can be done on a player’s turn, and you have a game that feels rushed and not completely finished. The game is basic and it doesn’t appear to shy away from that fact. The level of enjoyment you will get out of it will be more dependent on who your opponent is rather than the game play itself. Great for the kids, but the salty veterans of game playing will quickly want to jump ship.