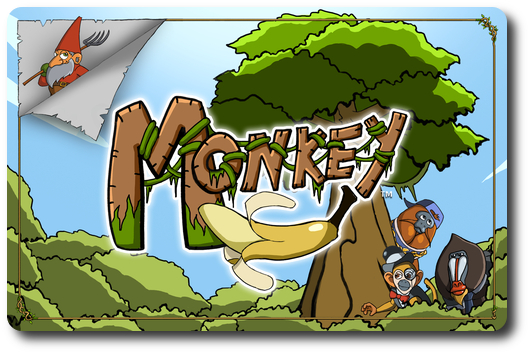 The crazy wizard, Kurgill, has had it up to here with the monkeys outside his castle. He’s decided to take matters into his own hands and has cleverly placed traps on the trees the monkey’s swing from, including spells. The monkeys, not liking Kurgill very much, know that the only way to beat the old wiz at his game is to play along. And so, the monkeys make best of a bad situation, challenging themselves in the process to a race.

Monkey, designed by Rob Gosselin and published by Birdlight Games, is comprised of 5 Character cards, 60 Tree cards, 25 Spell cards, and 2 Reference cards. The cards are as thick and as durable as your standard playing card. What little artwork there is, by Oscar Linder, is clean and colorful.

Monkeys On Your Mark! Get Set! 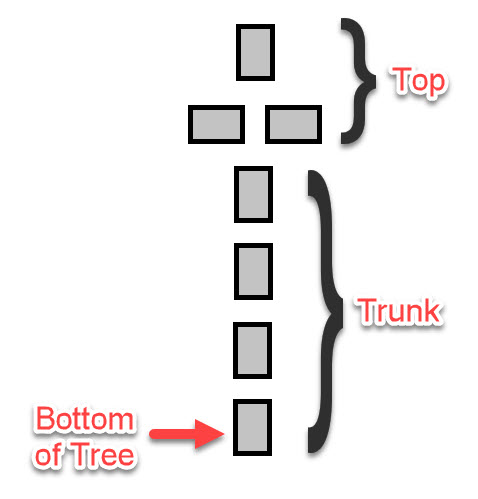 Second, deal to each player three Tree cards. This is the player’s starting hand. Players should keep their cards hidden until played. Set the remaining Tree cards face-down and to one side of the game playing area. This is the Tree draw deck for the duration of the game.

Fourth, have each player select a Character card (that depicts different monkeys in various attire) and place next to the bottom of the Tree, face-up. 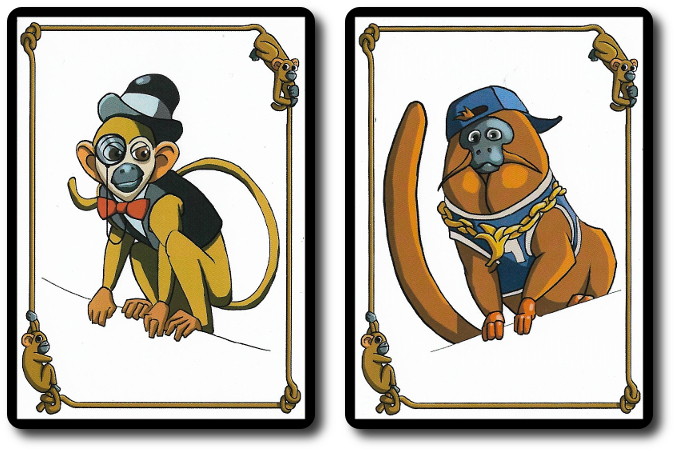 Monkey is played in turns with no set number of turns per game. A player’s turn is summarized here.

The first thing a player does on their turn is draw the top-most Tree card from the Tree card draw deck. This card is added to their hand. There is no hand size limit.

The player then draws and flips over the top-most Spell card, placing it face-up in a discard pile next to the Spell card draw deck. The Spell is immediately resolved. The following spells are possible, with their listed effects. 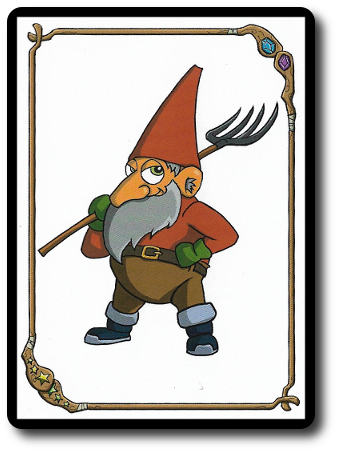 This gnome is a bastard…

The player now has two Action Points to spend. They can spend them on the following actions and in any order, including taking the same action twice.

The Subtle Art of Climbing Trees Like a Boss (Monkey)

When a player attempts to climb the tree, they complete the following steps: 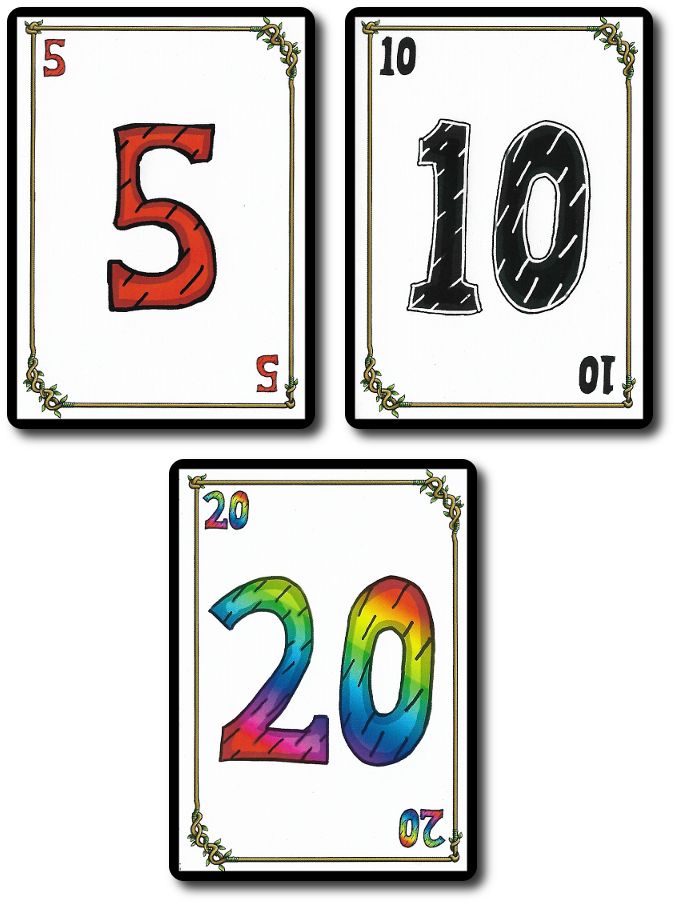 If the player can play enough Tree cards of the right color that has a combined number value greater than the revealed Tree card, they move their Character card to the next card up in the tree. If they cannot, they move their Character card down one position in the tree. Any Tree cards used are returned to the player’s hand and the Tree card is flipped face-down. Ties are considered a failure.

If the player’s Character card is at the top of the tree, they can take two action points to attempt to complete the tree top challenge. This is done is the same way as climbing, except the player reveals one Tree card at a time. If the player beats the Tree card, any Tree cards used are set aside.

If the player can play enough Tree cards of the right color that has a combined number value greater than the revealed three Tree cards, they must now attempt to survive the Monkey Traps. If they cannot, they move their Character card down to the top-most position on the Trunk. Any Tree cards used are discarded. Ties are considered a failure.

Monkey Traps are placed on other player’s Characters and hinder the monkey’s climbing progress. The maximum number of Monkey Traps that can be set on a player is four, unless the Gnome Spell card is setting traps, in which case the limit is temporarily ignored.

After the player beats a position in the tree (successfully being able to advance), they must overcome any traps. Any Tree cards used to climb are collected and are now turned over. Each Monkey Trap card is revealed one at a time.

The first player to complete the tree top challenge and overcome the Monkey Traps wins the game!

The standard game described above has everyone racing on the same tree. Using this game variant, each player has their own tree Trunk to climb, but share the same canopy. This game variant can be used for two to four players.

Another game variant introduces the crazy wizard (Kurgill) into the mix, as a non-player character who attempts to beat the other players. Of course, the wizard cheats. 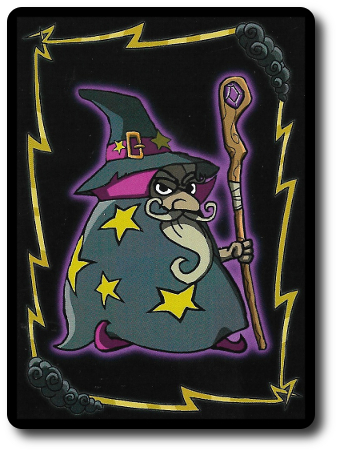 This guy is related to the gnome

Finally, there is a “super hard” game variant that removes all the positive cards and puts more emphasis on “pain” and “traps” by making the tree one big obstacle from the ground up.

To learn more about Monkey, visit the game’s website.

The Child Geeks had a lot of fun with the game, quickly understanding the approach they needed to take in order to win. According to one Child Geek, “It’s all about the cards you have and when you decide to use them. What I really like is the traps, that always make you think twice about the cards you want to use!” Another Child Geek, much younger and less experienced said, “What I like the most is my monkey. I like helping him climb to the top!” The game, while found to be fun and engaging, was also seen as a difficult exercise in hand management and memorization. The Child Geeks loved the traps when they worked in their favor and hated them with a passion when they didn’t. This love/hate relationship worked, as the Child Geeks all agreed to approve Monkey!

The Parent Geeks also enjoyed the game, both with their families and especially among their peers. According to one Parent Geek, “This game was a real surprise for me. I wasn’t expecting much based on how you described it. Wow, was I wrong! The game has a lot going on, even when you consider how simple it is to learn how to play.” Oddly enough, one of the most anticipated and enjoyable aspects of the game was when the Boxing Glove Spell card came out. Everyone shouted, “Hurrah!” and got to punching each other in the face (figuratively speaking). This short, but influential, player interaction really pleased the Parent Geeks. As one Parent Geek put it, “Any chance you can give me to slow down an opponent who is getting too far ahead is fine by me!” And it’s here that I must make a very interesting observation. It became obvious that some of the Parent Geeks were holding back, letting the more adventurous and risk taking players go first to uncover traps. This gave the slower players information and the ability to adjust their strategy. The end result was a game that all the Parent Geeks enjoyed.

The Gamer Geeks had zero issue with the game. They thought it was well designed, clever in its execution, and had everything that they thought a “complete game” should have. Why then did they reject it? According to one Gamer Geek, “Good game – for kids – FOR – KIDS. For me, as a game veteran, I liked what the game was about and how it did it, but I was appreciating it from a mechanical and design perspective. Not as a player. As a player, I just wasn’t all that interested.” But the game did have its supporters. According to one Gamer Geek, “I thought the game was really well done. Not a terribly difficult game, but it does present a challenge that I found engaging. I’d vote for it.” Unfortunately for the game, the votes that came in tipped it towards rejection from the gaming elitists. But before they sent it off, they wanted to make sure the game designer knew he did a great job.

I very much enjoyed the game as a filler with the peers or as a family game for the evening. The game plays very quickly and has lots of ups and downs. I liken it to a smarter version of Chutes and Ladders, except in this case, the players see the pitfalls coming (if they remember) and can attempt to avoid them. It’s also a game that you could spend as much (or as little) brain power as you like, but woe to the individual who thinks they can play this game on auto-pilot. Monkey is a game that requires players to pay attention and play smart, but only to a point. There is an advantage to be had by letting the opposition go ahead of you to uncover traps and challenges. The trick is to make sure they never get too far ahead and remember everything you see.

Monkey is a clever game, but not clever enough to capture the sincere interest of gaming veterans. Still, the fact that they went out of their way to let me know they “appreciated” the game does suggest there is enough to Monkey to be of genuine interest. I agree. After playing very complex to stupidly simple games for years and years, I think Monkey fits nicely into the middle. Not too difficult to understand, but challenging to win. Good use of memorization and invites users to take risks with or without prior knowledge of the mess they could be getting into. I think the best way to summarize Monkey is that it empowers the player without over or underwhelming them with a feeling of weighty decision making.

Do try this game when time allows. It did a good job of entertaining and challenging in equal measure. It’s much more fun than a barrel of monkeys.