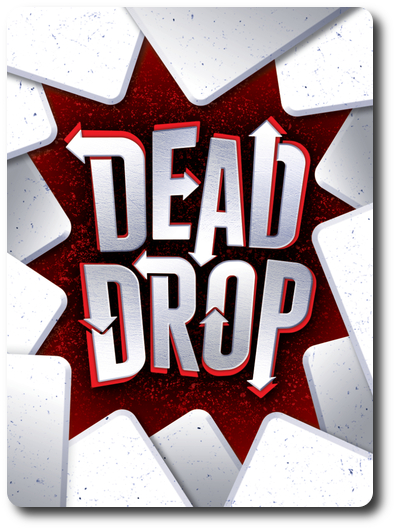 Several international intelligence and police agencies have been keeping track of a world-renowned spy who was last seen holding valuable documents. There’s an hour where his activities cannot be account for and the documents he was holding are now missing. You have to figure out where the spy left the documents and claim them before a rival agency does.

Dead Drop, designed by Jason Kotarski and published by Crash Games, is comprised of 39 Information cards (3 sets of cards, 13 cards per set), 4 Reference cards, and 9 Scoring tokens. The cards are as thick and as durable as your standard playing card. The Scoring tokens are made of wood and look like little envelopes packed with secret spy stuff.

Dead Drop comes with several themed sets that have different illustrations on them. The standard is the 007 Super Spy theme, but players can also use the Monster and Kid themed sets.

From left to right: Spies, Monsters, and Precocious Kids

The theme has no impact on the game and the cards from different themes can be mixed together. All that matters is the proper number of cards. Before playing, create the Information deck with the following cards.

In total, the Information deck should now have 13 cards with the values noted in the quotes. All other cards should be placed back in the game box.

Now shuffle the Information deck and place the top-most card face-down in the middle of the playing area. This card is refereed to as “the Drop”, which thematically represents the important information everyone is attempting to grab.

Finally, deal the remaining Information cards out evenly to the players. Players should look at the cards in their hand but keep them hidden until it’s necessary to reveal them. Place the Scoring tokens to one side of the game playing area. They will be used later.

That’s it for game set up. Time to do some secret spy stuff.

Dead Drop is played in rounds and turns with no set number of rounds per game. A player must take 1 of 3 possible actions on their turn and one optional action before their turn ends. A player’s turn is summarized here.

If the answer is “No”, the player takes back their Information cards. Either way, both players now know something very important about the other.

After taking 1 of the 3 actions, the player can either end their turn or attempt to grab the Drop. If the player ends their turn, they announce to the table that they are finished and the next player goes.

If the player believes they have enough information to grab the Drop, they place 2 Information cards face-up next to the Drop and then look at the Drop card’s number value. The player should not reveal the Drop card’s value to any of the other players.

If all but one player is eliminated from the round, then the remaining player is the winner of the round by default and takes a Scoring token. A new round now begins.

Completing the Round, New Rounds, and Ending the Game

A new round begins by resetting the game, but players keep the Scoring tokens they earned. The game ends when a player has earned a total of 3 Scoring tokens.

The Child Geeks had a hard time getting into this game. If you view it from afar, it looks rather “mathy” and that turned off a number of our players right from the start. Math can be intimidating and is oftentimes the source of frustration and stress for Child Geeks. As a result, a number of our players made incorrect assumptions. For those who still sat down and played the game, they quickly discovered that the level of math in the game is exceedingly small. According to one Child Geek, “I thought this was going to be a game about adding a lot of numbers, but it’s actually a memory game that only requires very little math.” Well said and very true. Dead Drop is more about memorization and deduction, rather than addition or subtraction. Another Child Geek said, “Once you understand that the game is all about figuring out what is hidden based on what is visible, the game becomes a lot easier to play.” Easier to play, but not easier to win. When all the games were over, the Child Geeks were mixed at best when the votes were tallied. Whether it be the initial assumptions that tarnished the game or the sometimes frustrating game play, the Child Geeks collectively agreed to disagree on if Dead Drop was a game for them. 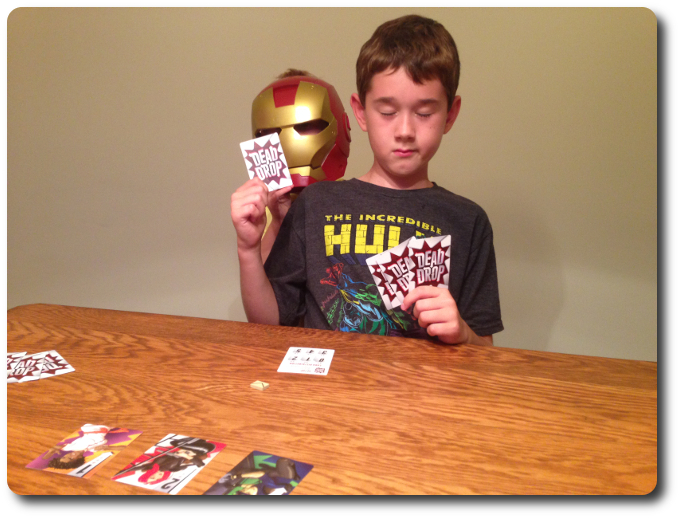 The younger Child Geeks didn’t want to play, but they were still interested in watching (in disguise)

The Parent Geeks enjoyed the challenge of the game and how easy it was to play, but did not enjoy the fact that players could not have a single turn during a round of game play or the Drop could be claimed by luck. According to one Parent Geek, “I don’t know. It just bothers me that a player can win the game by guessing and not putting any effort into their turn and there are some games where I didn’t get a turn at all because someone ahead of me got the drop first.” This can and has happened on several occasions, but the number of times guesses succeed are very few. As for not getting a turn, well, that can happen, too, but a player doesn’t win the game until they succeed at collecting the Drop 3 times. Another Parent Geek said, “I like this a lot better then Love Letter. I feel like there is more deduction and less luck. More direct interaction with players.” After several games, the Parent Geeks all agreed that Dead Drop was pretty fun, both with their peers and their family.

Some of the Gamer Geeks found the lack of actions available to the players to be too limiting, but other Gamer Geeks were quick to point out that Dead Drop is a microgame and meant to be “short and to the point”. According to one Gamer Geek, “Besides, fewer options doesn’t make for a bad game. Fewer options just makes each choice you make all the more important to consider.” Another Gamer Geek said, “This game does everything that it should. It’s small, easy to teach, and challenges players from start to finish. It’s a great example of a microgame, if you ask me.” The concerns expressed by the Parent Geeks never manifested with the Gamer Geeks, most likely due to the fact that the Gamer Geeks always attempted to play and win using the methods the game designer intended. There were a few times that a round or two was won by luck alone, but none of the Gamer Geeks found this to be anything more than a “risky move”. One Gamer Geek put it beautifully when he said, “Yes, I could risk a guess, but why? Within 2 turns, I bet I can know for sure. Besides, where’s the fun in guessing when the game is all about deduction?” When the votes were in, the Gamer Geeks all agreed to approve the game.

Love Letter kept being mentioned by our players during our game sessions, so I feel that I should very quickly explain the differences between the two games. Both Love Letter and Dead Drop are Deduction games, but they play very differently. In Dead Drop, players always have the same actions and are attempting to learn the value of a card that never changes, but the visible cards that help determine the Drop are always shifting about. Dead Drop focuses on learning as much as you can as quickly as you can. In Love Letter, the actions the players can take is dependent on the card they choose to play which then allows the player to name other cards in an attempt to knock out another player. In both games, the player who wins is the one who can figure out a card value first. Both games play very differently and will appeal to different crowds. I personally believe Love Letter is better suited for the more casual and non-gamer because the cards direct play, while Dead Drop is a lighter gamer’s game due to the actions being limited and the tight control of information.

I was very pleased to see non-gamers enjoy Dead Drop and surprised to see gaming elitists turn up their nose to it. When we compare all the votes from all our groups, Dead Drop was widely accepted and enjoyed. Not mentioned in any great detail by our players was the game’s size, which makes it easy to travel with and to play, since it requires very little space. What was mentioned and very much enjoyed were the theme decks. Theme plays no role in the game, but players liked that they could pick and choose. Such a small thing, but sometimes the smallest of things make the biggest difference.

I’ve enjoyed Dead Drop and continue to enjoy it, finding it to be a great “before bedtime game” with my kids, a great filler with my gaming friends, and just about whenever a light game of deduction is requested. Dead Drop worked every time and continues to stump and entertaining in equal measure. If you like games where memory and deduction are essential, then do grab Dead Drop.