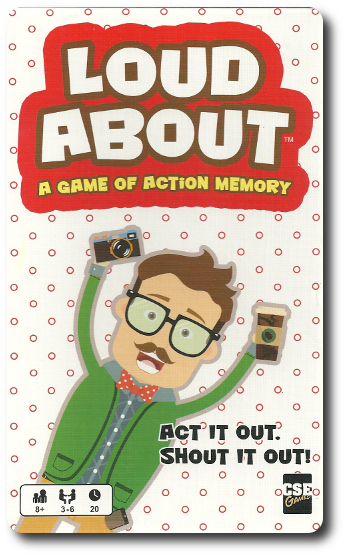 American columnist, Franklin Pierce Adams, said: “Nothing is more responsible for the good old days than a bad memory.” Memory is a funny thing. We think we remember things exactly as they are, but time erodes the details, and new life experiences fill in the gaps making a single memory a composite of memories and assumptions. In this game, memory is key to victory, but you’ll be hard-pressed to remember that when your’e in the heat of gameplay.

Loud About, designed by Jeff Lai and published by CSE Games, is comprised of 58 game cards, 52 Topic cards, 7 Slap tiles, and 1 Center card. The cards are as thick and as durable as your standard playing card. The tiles are thick, as well, and very durable.

To set up the game (and get right to playing), first place the Center card in the middle of the playing area with the “Round 1” face-up. 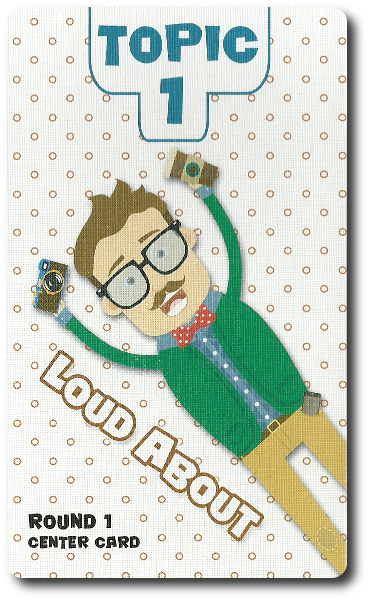 Third, going in turn order sequence (starting with the first player), have each player select 1 Word-Action. A Word-Action is a combination of words and actions that are based on the visible Topic card. The actions should be associated with the topic and word as much as possible. For example, if the Topic card were “Sports,” a good action word would be “Baseball” followed by the player pretending to swing a bat. Get it? Got it? Good. Moving on.

Fifth, each player now grabs a Slap tile and reveals it. All players must memorize the Slap tiles that were selected. Once everyone has had a chance to look the Slap tiles over, they are placed face-down next to the Center card in a stack. Any Slap tiles not selected are removed from the game at this time.

Sixth, shuffle the “Round 1” game cards and place them face-down to create the draw deck.

That’s it for game setup and initial play. The second phase of the game is all about remembering what was shown and being super fast.

Taking turns, each player will draw the top-most game card from the draw pile, placing it face-up for all the players to see. If the revealed card matches a Slap tile in play, the first player to slap that tile collects the game card as a victory point, placing it face-down in their pile. Collected game cards should be placed face-up in a single pile in front of the player if they are not used for a slap. 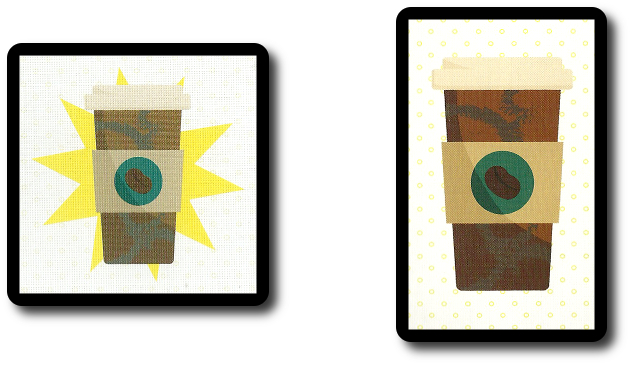 If two players have the same game card object showing, they have a “Face-Off.” As quickly as possible, the two players must shout out the word and complete the action that belongs to their Face-Off opponent. Both players may try multiple times until they get it right or simply give up. The first to correctly state and act out their Face-Off opponent’s Word-Action collects their opponent’s top-most matching game card and places it in their pile, face-down, thus ensuring another Face-Off is not immediately triggered between the first two opponents. However, if the newly revealed card that belongs to the opponent who lost the Face-Off matches another opponent’s top-most game card, another Face-Off immediately ensues.

Ending Round 1 and Starting Round 2

The game continues with players taking turns drawing cards until the draw deck is depleted. Then the players shuffle the Round 2 deck. Another topic and Word-Action is selected. The game’s overall difficulty jumps a smidge with possible Face-Offs with two topics and 2 Word-Actions in play. A new game card referred to as the “Swap” can also be drawn that switches the topic positions.

To learn more about Loud About, visit the game’s web page.

The Child Geeks did very well, but it was clear that game didn’t appeal to them. Specifically, the portion where they had to go back and forth in a Face-Off. According to one Child Geek, “If you forget what the other players’ Word-Actions are you are sunk.” True. If you cannot remember the Word-Actions, the entire game is going to go horribly for you. Another Child Geek said, “I can only ever remember one or two Word-Actions. I don’t bother trying to remember the rest. That way I can always win if there is a Face-Off between specific people.” A risky venture that seldom pays off. Face-Offs are random and it’s just as likely you’ll get paired with an opponent’s Word-Action you’ve memorized versus one you have not. The result was a mixed level of approval from the Child Geeks.

The Parent Geeks were much better at the memorization, but not the dexterity. Turns out that the dexterity portion, if evenly matched with opponents, is not that important to the game. What matters is the Face-Off where players earn points. You can collect as many cards as you want, but until you win an opponent’s card or they match a tile, they count for nothing. This was not lost on the Parent Geeks. According to one Parent Geek, “The game is all about timing, sure, but it is so much more. You have to memorize so much, especially if you are playing with a lot of people. Speed and memory go hand in hand here.” Another Parent Geek said, “A fast and bitter game. I hate losing the Face-Off.” The Parent Geeks had a lot of fun, but it was obvious that they enjoyed the game the most with their peers, making Loud About not the most family friendly of family games. Regardless, the Parent Geeks fully approved Loud About.

The Gamer Geeks found the game to be annoying and enjoyable in equal measure. Annoying in the sense that being the first to slap a card meant everything, but they enjoyed the challenge of the Face-Off and watching their opponents flounder when they could almost, but not close enough, remember what it was they needed to say and do. According to one Gamer Geek, “The game is just plain silly, but fun, too. I’d play this with the right group, but it’s not a game to be taken seriously.” Another Gamer Geek said, “A good enough game that pairs well-known rules and game mechanics in a new way. Well, not new, but different enough to make the game feel fresh.” The Gamer Geeks enjoyed the game well enough to tolerate it, but it did not enthrall them. They debated whether to approve it because it made them laugh or reject it because the game was so “blah” when it came to the depth of play. They ended up giving Loud About a mixed review, finding it to be a game they enjoyed, but most certainly did not love.

Loud About is both a hilarious and frustrating game wrapped into a tight package you can’t help wanting to both hug and kick. In essence, the game challenges players to be at their top-most performance in the areas of memory and dexterity. These are two areas that do not naturally commingle very well. While it can be a simple act to focus on being fast, the same level of concentration cannot be given to memorization. The players must, therefore, balance what they must know and what they must do in a way that does not hinder either. And there’s the trick of the game and the challenge. Balance is the key, but good luck trying to remember that when you are in the heat of a Face-Off.

The game provides many funny moments, especially when players are stuck in a Face-Off where they are almost getting the opponent’s Word-Action correct, but not close enough to get a win. As the tension level rises, so too does the hilarity. Being a spectator of such an event is a lot of fun. Not so much for those in the Face-Off.

If you are looking for a new take on Memory games, where the speed of the hand and the quickness of the mind are two important assets, then do take a look at Loud About. It’s a game that will certainly challenge you to keep a straight face when you are trying like made to keep your memory and movement at top performance.