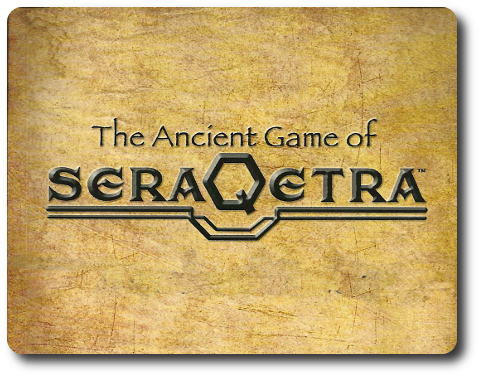 In ancient days, mankind once believed that it was possible to obtain god-like status through rituals, rites, and deeds. The longing to be bigger and better than what we are is part of us all. Whom among us has not wished to be taller, smarter, better looking, or richer? In this game, the highest status above all things can be obtained, but only through diligence, cunning, and strategy.

The Ancient Game of SeraQetra, designed and self-published by Bruce Baker, is comprised of 1 game board and 75 game pieces (25 game pieces per player). We were provided the deluxe version of the game that came with a backlit game board and sculpted pieces. Very posh.

Before one can play the game, one must understand how the different game pieces are used in the game. Shapes and movement go hand in hand, allowing players to very quickly scan the game board and determine how best to move and from what direction threats may approach. Each game piece is summarized here.

Gods can move in any direction on the game board, but only 1 hexagon space at a time. 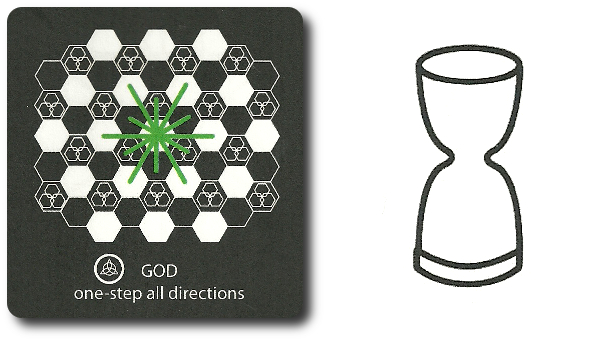 Rulers can move in any direction on the game board with no space restrictions. 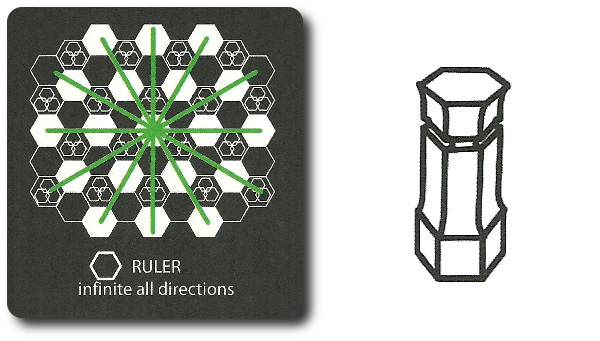 Ambassadors can only move through the sides of the hexagons with no space restrictions. 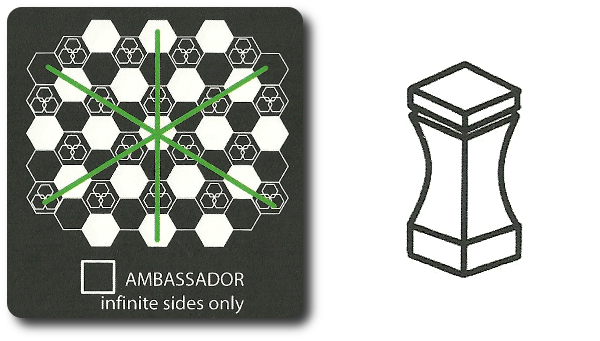 Warriors can only move through the corners of the hexagons with no space restrictions. 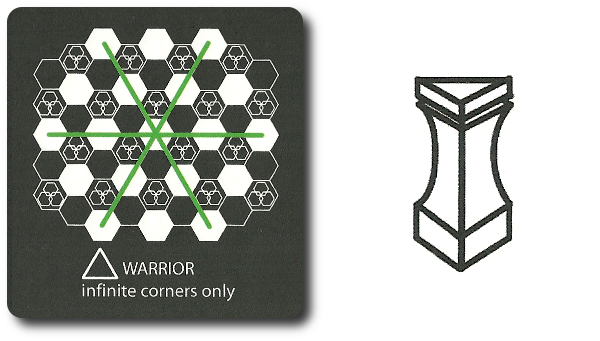 Priests can only move through the sides of the hexagons, but only 1 hexagon space at a time. 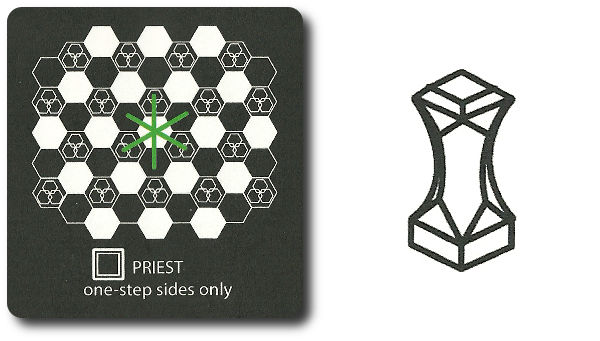 Spies can only move through corners of the hexagons, but only 1 hexagon space at a time. 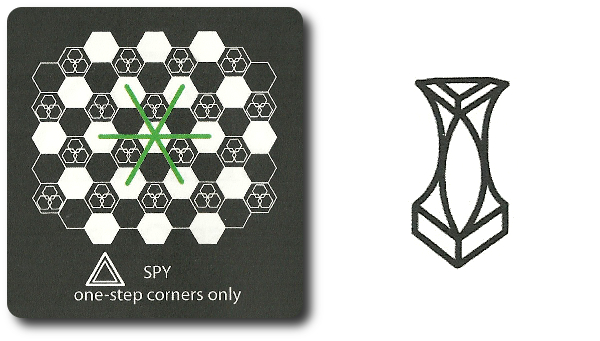 Minions can move in any direction, but only 1 hexagon space at a time. 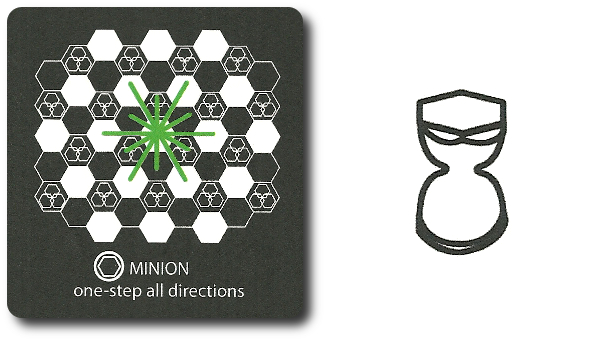 To set up the game, first have each player sit behind their section of the game board. These sections are referred to as the player’s “Universe” and represent the initial area they control. Closest space to the player on the game board is the “Throne”. Diagonal to the Throne and representing the far-reaching border of the player’s Universe are the two “Palace Gates”.

Second, have each player set up their playing pieces in any configuration within the bounds of their own Universe. The player is welcome to use all their pieces or just some, but must use at least the God piece, one Ruler piece, and one Minion piece. Pieces not placed now can come into play later during the game. The only areas that cannot contain a piece at this time are the Palace Gates and the Throne.

This completes game set up.

Wars in Heaven, Battles on Earth

Players take turns moving one piece at a time. Any piece can go anywhere on the game board except the Throne. The Throne space is reserved for the God and Ruler pieces.

Capturing a piece is always optional (i.e. players are not forced to move their piece to capture a nearby piece). The one exception is the God piece. If the God piece can capture a piece on the player’s turn, they must move it so as to capture the opponent’s piece. This is both a blessing and a curse, as an opponent can sacrifice a piece to force an opponent to move their God into a precarious position.

If at any time a player has an opponent’s God piece in their sight and ready for possible capture, they announce it to the table. The opponent can then claim they can move their God piece out of jeopardy or concede the defeat.

The Child Geeks had no problem quickly learning the game, having already being very familiar with Checkers and Chess. According to one Child Geek, “The game is super easy to learn.” It really seemed so, but the Child Geeks constantly referred to the rule book to make sure they were moving their pieces correctly. Even after explaining that the shape of the piece dictates its movement, the Child Geeks couldn’t seem to match shape to movement path. That is until game three, at which point the rule book was no longer referenced. As one Child Geek put it, “At first you are a bit lost about how the pieces move since they look a lot a like. But you slowly start to see the differences and learn how they move about the board.” The Child Geeks had a really great time with the game and claimed it was just as challenging as Chess and a heck of a lot more fun than Checkers. They voted to fully approve the game.

The Parent Geeks were also impressed. Part of which had to do with the game’s presentation. The deluxe version of the game we were given always drew a crowd. According to one Parent Geek, “You have to believe that a game that looks this good plays really nice.” And indeed it did. The Parent Geeks enjoyed the three-player game the most, finding it to be a real challenge to manage two possible threats at a time and working off an ever-shifting strategy. They also found the game to be a lot of fun when playing with another adult or children. As one Parent Geek put it, “The game is sure to teach players how to be strategic, use tactics, and adjust their thinking.” The game board shifts around a lot and one player’s downfall quickly becomes another player’s windfall. It kept everyone guessing and wanting more. The Parent Geeks voted to approve SeraQetra.

The Gamer Geeks were very impressed with the game board and the game pieces, but found the gameplay to be somewhat blah. According to one Gamer Geek, “Yeah, this just feels like a mix of Checkers and Chess to me. Nothing really new or interesting other than the game bits and the board with lights.” Another Gamer Geek said, “I’m all for playing derivative of other games, heck I play a lot of Rummy-like games at home. This, however, just felt like the only thing that changed were names and piece sizes.” It’s not that the Gamer Geeks found SeraQetra to be a bad game. More like it was just not a very interesting one. Once they got past how the game looked, they found that the game play wasn’t anything new. This really put them out; even made a few of them kind of pissy. Needless to say, the vote for the game’s endorsement was a heated one. In the end, the Gamer Geeks decided to reject SeraQetra, finding it to be a game with little interest.

We were provided the deluxe version of the game, which is exceedingly big, beautiful, and heavy. The game board lights up, the game pieces are as big as your palm, and everything comes in multiple cases. This made the game difficult to review since it was, essentially, too difficult to be portable to different reviewing locations. Not that it mattered much. Any player who saw the game set up wanted to sit down and play it. SeraQetra has a lot of power to draw a player in from just how it looks. As we observed, however, it did not have the power to completely enthrall players.

I personally feel very fortunate to have been provided the deluxe version of the game, but if I were to purchase it, I would go with something much, much smaller. The game play is pretty straight forward, but game set up and game storage is a real pain in the but when you have to make several shelves of room to store it. But the size of the deluxe version did nothing to improve the gameplay. That’s why I think a smaller version would be much more welcome. Smaller, more compact, and a lot easier to break out and play at the table.

I liked the game, but agree with the Gamer Geeks that there isn’t much to it that is new or ground breaking. All the pieces move like Checkers with some restrictions like Chess. It leaves you feeling like you are playing a game you already know, but the rules are a bit off. What it does provide is an interesting challenge. There are “hot spots” (Thrones and Palace Gates) everyone watches and goes for. You are constantly battling it out and a smart player knows to move their pieces into position early and hold out for the big kills. Some pieces are worth more, but there is not a single piece that is worthless.

If you like Chess and Checkers and are looking for a fun and challenging alternative, do take a look at The Ancient Game of SeraQetra. It’s sure to make you think and smile.