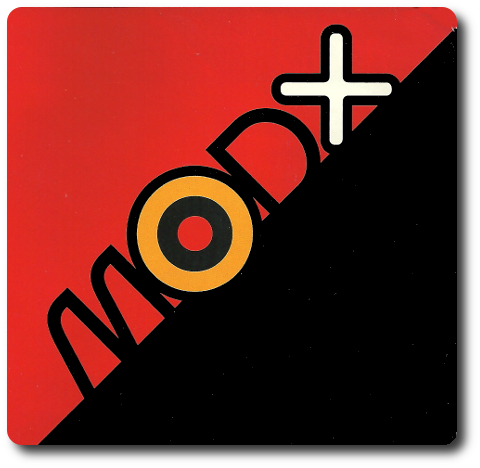 Dutch Chess Grandmaster, mathematician, and author, Max Euwe, said “Strategy requires thought, tactics require observation.” In this game, a player will need to be observant and think logically beginning with their first move to their very last. This is not a game for rash thinkers, but nor is a game that requires a great effort. Victory comes to those who look for opportunities to excel.

MOD X, designed by Mark Wilkinson, Joan Wilkinson and published by Cryptozoic Entertainment, is comprised of 56 X pieces (in 4 different colors, 14 per color), 8 Joker pieces (clear plastic X pieces), 72 Score markers (in 4 different colors, 18 per color), and 1 game board. All components to the game are made of solid and durable plastic. This is a seriously well made game, complete with rubber footings under the game board to ensure the game stays where you want it to.

Third, determine who will be the first player. The last player in turn order sequence now takes 5 Joker pieces and places them on the game board. The Joker pieces can be placed anywhere, but they must not be directly adjacent to each other. The remaining 3 Joker pieces are placed back in the game box.

That’s it for game set up. The first player now places their first X piece.

X’ing Out the Competition

X pieces can be places in any free space on the game board which includes spaces that contain Score markers. 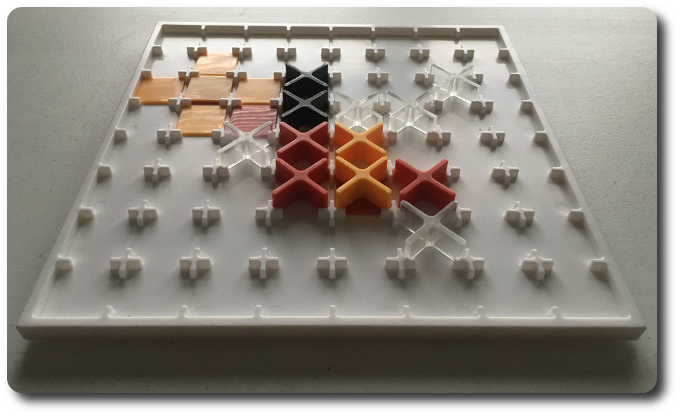 If a player completes 1 of the 3 different patterns using their X pieces and any Joker pieces, they now score points. This is done by removing 1 player X piece at a time and replacing it with 1 Score marker. The player does not remove any Score markers already occupying the space. Instead, they place their Score marker on top of it. The removed player X pieces are returned to the player and can be used in future turns.

If Joker pieces were part of the completed pattern, they do not score any points for the player. Instead, the player removes the Joker pieces and places them anywhere on the game board where there is an empty space as long as the placement of the Joker piece does not complete a pattern using player X pieces. Joker pieces can be placed on top of Score markers.

There is one exception to the Joker placement rule. If the player can places the Joker pieces in such a way as to create 1 of the 3 patterns using nothing but the Joker pieces, they may do so. This automatically ends the game and the player is declared the winner.

If the player did not complete 1 of the 3 patterns after completing their X piece, their turn is over and the next player in turn order sequence now goes.

The game can also end if a player is unable to take their turn due to no longer having any X pieces available to use. In which case, the game ends and the points are counted. The player with the most points wins the game.

If a player announces their turn is over, but fails to recognize a pattern they completed, any opponent can claim it. This is done by announcing the pattern and touching one =of the X pieces included in it. The opponent then scores the pattern as if it was theirs, but returns the X pieces back to the owning player. Game play then resumes as normal.

The extra Joker pieces included in the game are intended to be used by the player if they want to create their own game variant. For example, play with 6 Joker pieces instead of 5 or play with all 8.

The Child Geeks enjoyed themselves, finding MOD X to be an interesting derivative of the very well-known Tic-Tac-Toe games they have played in the past. According to one Child Geek, “This game plays just like Tic-Tac-Toe, but it’s more fun and harder since players can go anywhere.” All the Child Geeks enjoyed using the Joker pieces to complete their patterns and smiled or laughed evilly when they overlaid an opponent’s Score markers. As one Child Geek put it, “It feels really good when you get to score your points over your opponent’s points.” When all the games were over, the Child Geeks agreed that MOD X was a lot of fun. 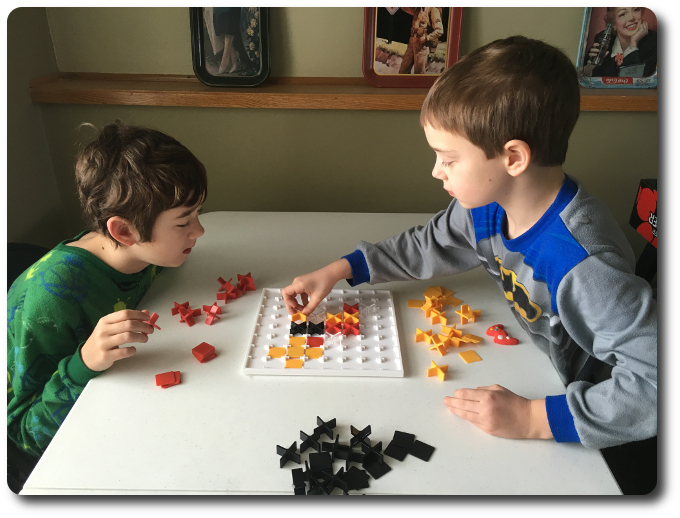 My two oldest ganged up on me…

The Parent Geeks were also pleased with the game, finding it to be not only a worthwhile puzzle to solve, but a strategic game to play. According to one Parent Geek, “I’ve enjoyed the game with my kids and my friends. The game plays great with both groups, even when you mix them up.” The Parent Geeks attempted to complete patterns using nothing but Joker pieces. None were able to do so, despite several being very close to completing the task. As one Parent Geek put it, “Just the idea of winning the game by placing the right pieces is enough for me to keep coming back and trying.” Try they did, but at no time did any feel that they failed if the pattern eluded them. All the Parent Geeks voted to approve MOD X.

If there is one thing a Gamer Geek enjoys it’s an Abstract Strategy game. Gamer Geeks want a game that challenges them to think tactically, consider different strategies, and continually allow for multiple ways to go about making moves. MOD X did all of this and greatly pleased the elitists. As one Gamer Geek said, “A simple game with a simple concept that any can easily learn. But that’s where anything easy about this game ends. You have to put some serious thought into your moves and use guile to win this game.” Another Gamer Geek said, “Yes! This is exactly the kind of game I am looking for. Easy enough to play with my kids and challenging enough to play with my friends.” All the Gamer Geeks found MOD X to be an entertaining challenge that would be perfect for a lighter game night or filler. MOD X was approved by the gaming elitists.

MOD X is the kind of game that you will sit down to play and immediately recognize. The objective is simple and the way to move pieces around is intuitive. Blocking and maneuvering around your opponents while using the Joker pieces feels natural and rewarding. Where things begin to get tough is keeping and making points. Each player has the ability to squash the points earned by others and the Jokers, while powerful, do not earn the player points directly. The playing area beings to feel a bit cramped and each move with a piece begins to feel more important than you would expect, resulting in some very interesting decisions to be made and moments of analysis paralysis.

From our very youngest player to our very oldest, each was able to play the game well and earn their fair share of victories. We did observe multiple instances of gaming up on certain players, but this was to be expected when you mix and match age and skill groups. All groups attempted to create the Joker patterns. This is really, really difficult to do, especially when all the other players are looking to do it, too. The Joker patterns are not necessary to win, but they are an excellent and entertaining goal to attempt. They are the proverbial carrot dangling in front of the gamer, but only the most determined of puzzle solvers seem to want to take a bite. Everyone else was content to simply play.

I enjoyed my time with the game and would recommend it to any player who likes an Abstract Strategy game that can be easily taught, but not easily won. It can be played with mixed groups and different skill levels, allowing everyone to sit down and enjoy a friendly game. MOD X will make you think, but it won’t give you a nosebleed for your efforts. The challenge is thinking ahead, keeping your eyes on the shifting game board, and being aware of opportunities to block or to score. It’s a lot of fun and fast. Do try MOD X when time allows.