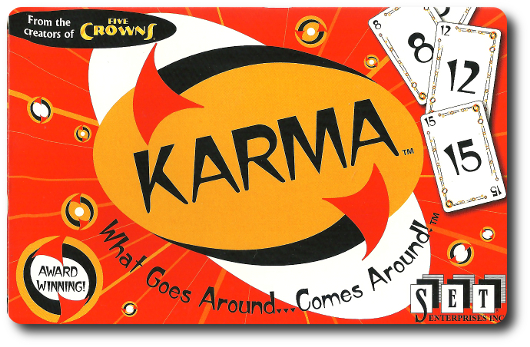 American film actor, director, and producer, John Wayne, said “Life is tough. It’s tougher if you’re stupid.” I believe this quote perfectly captures the essence of Karma. If we walk through life with thoughtful purpose and measured actions, we tend to succeed. If we rush ahead without thinking and give little count to those around us, failure in all things is almost certain. In this game, what you play will return to you for better or for worse.

Karma, designed by Marsha J. Falco and published by Set Enterprises, is comprised of 60 cards. The cards are as thick and as durable as your standard playing card.

What Goes Around Comes Around

To set up the game, first shuffle the cards and then deal 3 face-down to each player. These should be arranged in a row in front of their owning player. None of these cards should be looked at.

Second, deal 6 cards to each player. Players pick up these cards and decide which 3 to keep in their hand and which 3 to play face-up and on top of the 3 face-down cards, one face-up card per face-down card.

That’s it for game set up. Place the remaining deck of cards in the middle of the playing area. This is the draw deck for the duration of the game.

You Get What You Give

Karma is played in turns with no set number of turns per game. The player left of the Dealer starts the game. A player’s turn is summarized here. 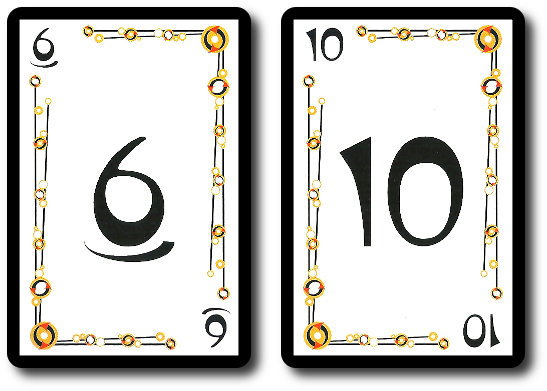 If a player is unable to or decides not to play a card from their hand, they must take all the cards currently in the discard pile and add it to their hand. The player’s turn is over and the next player in turn order sequence starts a new discard pile.

All players start the game with 6 table cards. Three are facing up and three are facing down. These cards cannot be played to the discard pile until the player removes all the cards from their hand. Then, only the face-up table cards can be played. It’s only after all the hand cards and face-up table cards have been played that a player can play their face-down table cards. However, these cards remain face-down until played, meaning a player might blindly draw a card that does not work (not equal to or higher than current discard card value or is not a Karma card) and must take the discard pile and the now revealed face-down card into their hand.

If the player ever has cards back in their hand, they must get ride of them before they can once again use the table cards.

The Rule of Triples

Karma cards are considered “Wild” and can be played on top of any other card. This includes any number value or other Karma card. Once played to the discard pile, the Karma card is resolved. The different Karma card effects are summarized here. 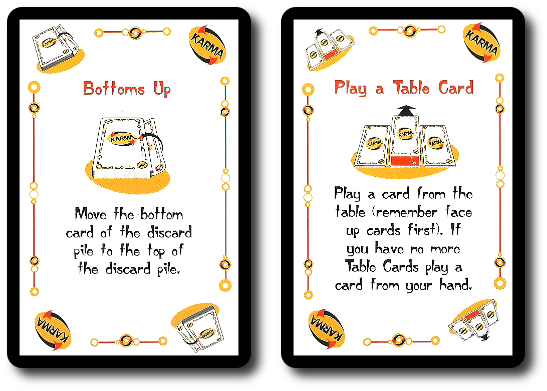 A player wins the game if they are not the last one with cards still to be played. This means a game of 4 players will technically have 3 winners.

This game variant removes the “Give the Pile to a Friend” Karma cards from the game prior to dealing cards. When a player makes a triple using numbers in the discard pile, they take the 3 matching numbers and remove them from play. They then give the rest of the discard pile to any other opponent of their choice. This includes opponents that have already played all their cards.

To learn more about Karma, visit the game’s web page.

The Gamer Geeks have played card games in the past where the purpose was to play cards as fast as possible. They had no problem learning how to play Karma and getting right into the action. They were disappointed when they had to take all of the discarded cards into their hand and elated when they forced an opponent to do the same. According to one Child Geek, “The best thing you can do is just play all your cards as fast as possible and save the Karma cards for perfect moments.” Another Child Geek said, “The game is a bit slower than I thought it would be and I hate getting more cards when I’m out, but I had fun!” When all the cards were back in the box, the Child Geeks gave Karma their approval. 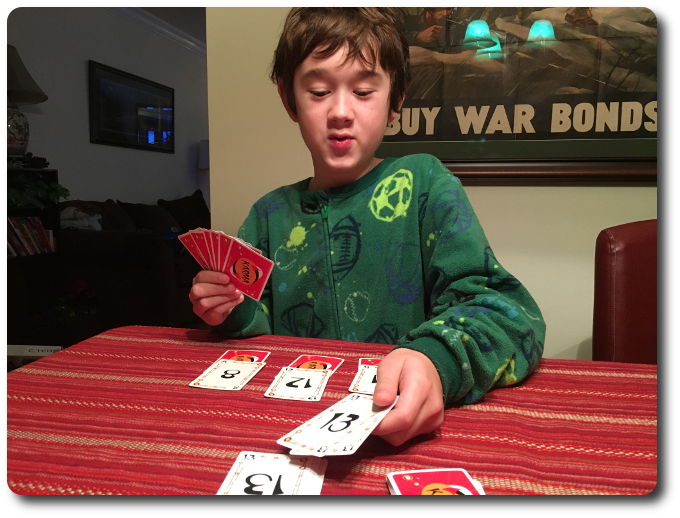 My oldest son rejoices in playing the difficult Triple!

If the Parent Geeks were of two different minds, the Gamer Geeks were collectively on the same page. All of the Gamer Geeks found Karma to be a card game that was not worth their time. According to one Gamer Geek, “This game feels a bit too close to War and is too simple. The only thing a player needs to think about is what card to play and even that decision is made simple because players always have to play a certain number or higher.” The Gamer Geeks did acknowledge that the Karma cards did add a bit of flavor to a game they otherwise found bland, but not nearly enough to make it a game they wanted to play. As one Gamer Geek put it, “This is a great card game for families or very casual card players. And that’s about it.” The Gamer Geeks rejected Karma.

You have to think when you play Karma, but not much. As one Gamer Geek already suggested, the cards to be played are pretty obvious. You either play a card that is equal to or higher than the current card value on the discard pile or a Karma card. The only thinking you have to do is consider which card value to play. This is the real “gotcha” of the game, as a player never wants to be stuck with low cards. Yet, if the player plays a high valued card, they might be able to skunk an opponent and force them to take the discard pile.

It sounds like a little thing, but the decision is an important one. This is especially true when players have to use their face-down cards. I personally found this to be an interesting way to play the game and also very annoying. Throughout the entire game players can see their cards and make decisions. Then, at the very end when victory is in sight, the game throws three speed bumps to slow everything down. It creates a bit of tension, to be sure, but it also generated resentment towards the game.

I found Karma to be a game I could easily play with my children and their friends, but not a game I particularly enjoyed playing with adults. The game lacks depth, but it does give its players some room to maneuver. I would suggest Karma to families who are looking to play a card game or for groups of Child Geeks. Don’t expect your good deeds to go rewarded in this game, as the only Karma you will generate is the kind that results in passive aggressive card plays.