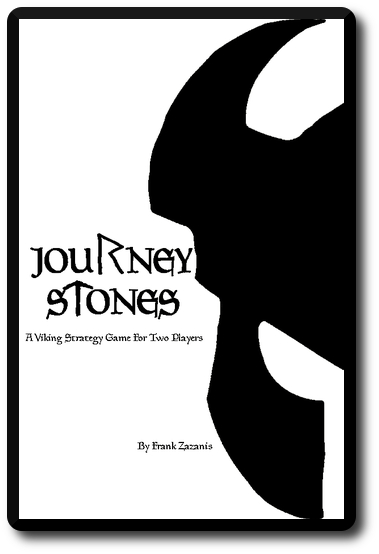 Ralph Waldo Emerson said “Life is a journey, not a destination.” As we grow older, experience new things, love, laugh, cry, and hurt, we learn. We become more than what we once were each time we take a step forward. The definition of success is personal and highly subjective. For some, it’s wealth and for others, power. In this game, success is survival.

Journey Stones (Boxed Edition), designed by Frank Zazanis and published by General Nonsense Games, is comprised of 2 game boards and 28 Stones (14 brown, 14 grey). One of the game boards is folded cardstock, which is not that great. The other game board is thick cardboard that is laser-cut into five puzzle-like pieces. The Stones are also made of thick cardboard and laser-cut. Overall, the presentation is minimalistic, but highly efficient. Oddly enough, the game comes with more pieces than what is stated on the game box or is necessary to play. General Nonsense Games publishes through Victory Point Games, which offers Journey Stones in two different formats. We were provided the higher-end version of the game.

Preparing for the Journey

To set up the game, first place the game board in the middle of the playing area. Depending on what game board you received in your game, you will either simply unfold your cardstock game board or need to assemble your puzzle-like cardboard game board. In either case, make sure that each player sits opposite of each other with the game board in-between them as you would with a Chess game board.

Second, have each player select and collect all the Stones of 1 color. 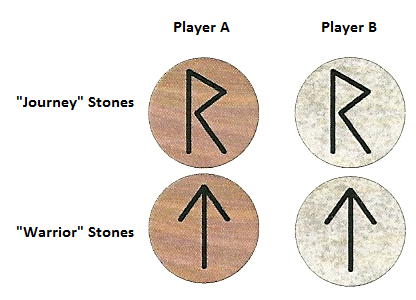 Third, each player should now place 6 “Journey” Stones on the square row closest to them and 6 “Warrior” Stones on the next closest square row. The left and right columns will not contain any Stones. The end result will look similar to the following image. 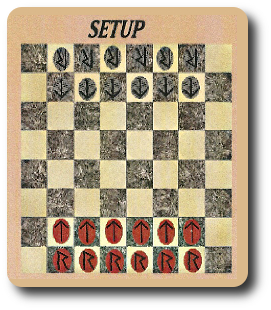 That’s it for game set up! The player with the grey Stones goes first.

Journey Stones is played in turns with no set number of turns per game. On a player’s turn, they will complete a one of three possible actions. The three actions are summarized here.

This action option allows the player to move 1 Stone or 1 Stone stack that they control. How far and in what direction the Stone or Stone stack can move is dependent on the Stone’s face that is showing.

A Stone or a Stone stack must move their total movement unless they capture or stack.

This action option allows the player to take their Stone and place it on top of another Stone they control. Essentially, this is done exactly like the capture action option, but instead of removing the Stone, it’s placed underneath the Stone that was moved. This creates a Stone stack. A Stone stack’s movement is determined by two conditions. 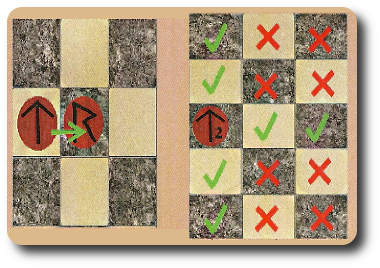 Once the player has completed one of the above three possible action options, their turn is over and their opponent now goes. This is repeated until the game comes to an end.

The End of the Journey

Journey Stones can be played using tournament style rules which includes a few changes to the standard game.

To learn more about Journey Stones, visit the game’s web page at General Nonsense Games or at Victory Point Games.

Journey Stones is close enough to Chess and Checkers to lead me to believe I”ll be able to teach this game to Child Geeks as young as 6-years-old. The game does not strike me as overly difficult and should be enjoyed by our casual players. Specifically, the Child and Parent Geeks. I don’t believe there is enough to the game to hold the Gamer Geeks’ interest, but I have no doubt they’ll recognize the risk vs. reward that comes with stacking the Stones. Overall, I believe the game will do well, but will not fully satisfy all of our players.

Teaching Journey Stones is very simple if your players have played Chess or Checkers before. If they haven’t, teaching Journey Stones is going to take just a few more minutes of your time. I suggest you demonstrate how the different Stone types move, both before and after they are stacked. I would also emphasis that the Stones capture by moving into a square space, not jumping over it.

After teaching the game to my two oldest little geeks, I asked them their thoughts on Journey Stones so far.

Journey Stones is an Abstract Strategy game, and as such, doesn’t really have much visual appeal. It won’t be drawing people in with its good looks, which are further reduced by the game component quality. Let’s play the game and see if it was worth the time setting up. 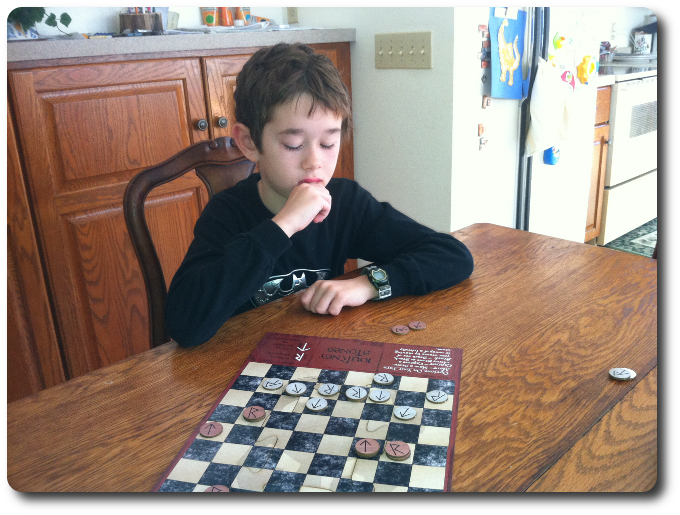 A quick game after lunch with my oldest little geek

The Parent Geeks enjoyed the game, but were not overly thrilled by it. According to one Parent Geek, “This is a nice alternative, but I don’t see myself throwing away my Chess board anytime soon.” Another Parent Geek, who was a bit more excited about Journey Stones, said, “This is so much better and more interesting than Checkers!” This leads me to believe that Journey Stones fits nicely between Chess and Checkers, providing a worthwhile alternative to both games. All the Parent Geeks thought the game played very well with their peers and with their family. They voted to approve it based on how easy it was to learn and its casual game play.

The Gamer Geeks, as I predicted, liked the Stone stacking game mechanism, but didn’t care much for the game itself. According to one Gamer Geek, “I can see this game doing well as an alternative to Chess or Checkers, but those are not games I am interested in.” Another Gamer Geek said, “It’s OK as far as a game goes, but I find it really boring.” From what I observed, Journey Stones just didn’t provide the Gamer Geeks with enough “game”. The strategy and tactics where there, but the game’s depth was not. In the end, it’s just about moving Stones around the game board and outflanking your opponent. That was not enough for the Gamer Geeks to approve Journey Stones.

I rather enjoyed the game, finding it to be an interesting alternative to Checkers, but I wouldn’t go so far as to suggest that Journey Stones is anything close to Chess. The only two aspects of the game that are similar to Chess is the Stone movement and the capturing, but that’s it’. The game is not long enough or deep enough to require the player to develop a strategy or complex tactics. Most of a player’s opening gambits do not lead to better piece positioning, either. As the game progresses with the Stone stacking, there will be more “reaction” versus “action” on a player’s part. Not a bad thing, but that type of game play more times than not leaves me feeling tired after playing it.

Still, an interesting twist on some classics that was fun to play. I’d recommend Journey Stones to Parents and Child Geeks, but would suggest that the Gamer Geeks look elsewhere. Journey Stones is not about the journey or the destination, but does provide value, a light challenge, and meaningful game play. Just not enough for the most elitist of gamers. I should also note that players looking for a “Viking game” will find Journey Stones disappointing. The only aspect of the game that is related to Vikings are the runes.