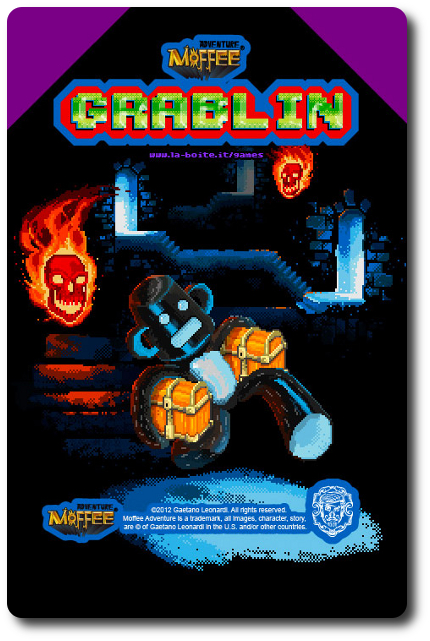 No one said getting rich was easy, but they never said anything about dying either. The job sounded simple enough: rush into the dungeon, grab the treasure, and rush out again. You thought the “rushing” part was included because your employer wanted the job done fast. Little did you know that you would be running away from monsters. Oh, well. Another day, another dollar.

Grablin, a self-published game designed by Gaetano Leonardi, is comprised of 20 custom six-sided dice, 20 yellow Treasure markers, and 1 dice bag. The artwork featured on the dice is in the retro 8-bit video game illustration style that continues to grow in popularity (all that is old is new again). Note that the instructions to the game are printed on the outside and back of the game box, but do not include a statement regarding the Treasure marker’s use. This game component was included after the game was initially released and the box has not been updated since then. The dice count is also incorrect (20 in total instead of 15). Supposedly, a small slip of paper is included with the game that explains how the Treasure markers are used. Our copy did not include this rules addendum. The only way we know how to use the Treasure markers is because we asked the game designer.

Note: Prior to playing your first game, you will be required to affix stickers to all six sides of the 20 costume dice. While not a difficult exercise, it can be a bit time-consuming. Plan your first game accordingly.

To set up the game, place all 20 dice in the dice bag. Optionally, the game box or a cup can be used to keep all the dice together.

Second, place the 20 Treasure markers off to one side of the game playing area.

And that’s it. Determine who will be the first player and begin.

Grablin is played in turns with no set number of turns per game. On a player’s turn they will complete a series of steps. Players will only evaluate the dice they have rolled during their turn; no dice are ever kept from one turn to the next. A player’s turn is summarized here.

The player grabs 3 dice from the dice bag and rolls them. All the dice are the same and a single roll could result in 1 of possible 3 different values per die. The die values are Treasures, Fists, and Skulls. Three out of the six sides of the die are Treasures, two are Skulls, and one is a Fist.

From left to right: Treasure, Fist, and Skull

Once the dice are rolled, the player moves to step 2.

The player now evaluates the results of their dice rolls.

If the player doesn’t have a set of 3 or chooses to ignore any sets (other than the Skulls), they can continue to roll or voluntarily end their turn. There is no reason to stop, however, as the dice are not saved from one turn to another. In the unlikely event that the player rolls all 20 of the dice without rolling any Skulls, they will either need to turn in Treasures (which will end their turn) or turn in Fists (which will allow them to steal a treasure and re-roll the Fist dice).

When the player ends their turn, the dice bag is passed to the next player in turn order sequence.

The game continues until 1 player wins by claiming or stealing a total of  5 or more Treasure markers on their turn.

To learn more about Grablin, visit the game’s web page on the Game Crafter.

Grablin is a light and casual Dice game of risk versus reward. There is no strategy or tactics to be had, but the players will be required to think logically and critically. That will be more than enough for the Child and the Parent Geeks to enjoy, but will not satisfy the Gamer Geeks. Three other games very similar to Grablin, (Zombie Dice, Martian Dice, and Trophy Buck) have met with mixed levels of endorsements. While Grablin won’t be challenging any of our players, it should be comfortably familiar to everyone.

Teaching Grablin is best done by example. Roll the dice and then start making sets of first Treasures, then Fists, and then Skulls. This allows the teacher of the game to logically introduce the game’s goal and hazards. None of our players had any problems grasping the game’s concept and game play, including a few new players who had not yet played a game like Grablin.

After teaching Grablin to my 3 little geeks, I asked them their thoughts on the game so far.

Let’s start rolling the dice and see if we find the game to be an enriching experience or we are being shortchange.

Overall, the Child Geeks enjoyed Grablin. They also kept calling it “Grablins” (plural), despite me constantly correcting them. I gave up after the 10th attempt. From then on, the game was known as “Grablins” or “the one with the zombie hands.” The younger Child Geeks were more willing to take risks than their older and more conservative peers. From what I observed, the older the Child Geek gets, the more important it is to them to win versus just having fun. A sad bit of commentary that I think we can all relate to. Regardless, all of the Child Geeks enjoyed the game and gave it their unanimous approval. Of course, the game frustrated the heck out of them when they rolled Skulls, but delighted them when they rolled Treasures and Fists (i.e. “Zombie Hands”). According to one Child Geek, “I like this game because it’s fast and fun, but I hate it when people steal my Treasure.” Don’t we all? 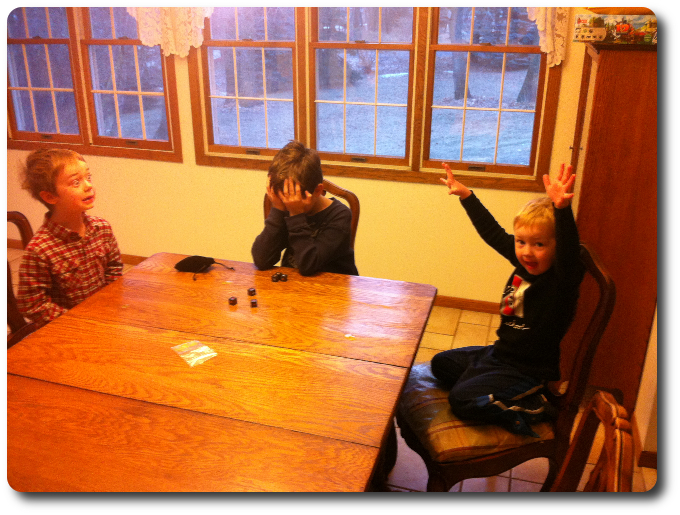 My oldest little geek rolls 3 Skulls three times in a row, much to the enjoyment of his younger brothers…

The Parent Geeks only felt so-so about the game, but they did enjoy it with their families. With their peers, not so much. According to one Parent Geek, “This is a lot of fun with my kids, but horrible with my adult friends.” All the Parent Geeks more or less agreed that Grablin was a great game for the family table and with their families, but not a game they would want to play with just adults. When the games were over, the Parent Geeks voted to approve the game because of the casual and entertaining game play it provided.

The Gamer Geeks were not impressed with Grablin. According to one Gamer Geek, “All I do is roll. From there I need to make a very simple choice. That is really boring.” But when I countered that Zombie Dice, a game that the Gamer Geeks liked playing, shared common game mechanisms, they frowned at me. One Gamer Geek responded by saying, “The games are not the same. With Zombie Dice, I feel like I am a zombie. It’s thematic. With this game, all I am doing is attempting to roll a specific icon. Treasures or Bro Fists. I might as well just be trying to roll specific numbers on a standard six-sided die!” I didn’t want to push it as the results were clear. Grablin was not a game the Gamer Geeks were enjoying or would enjoy anytime soon. While similar to other games they did enjoy, the lack of any thematic elements made Grablin feel nothing more than a pointless exercise of rolling dice for the sake of rolling dice.

Grablin is not a complicated game and does a great job of introducing the Geek Skills of risk versus reward and logical thinking in a very casual way. However, its casual game play quickly becomes repetitive and earned Treasures can be lost without any opportunity to block would-be thieves. That left some of our players feeling a little helpless and overly annoyed. This was especially true when a player won the game by stealing the Treasures versus rolling for them. But before we get all negative about the game, I think it wise to take a moment to step back and recognize the game for what it is. Grablin was not designed to be the “main game” of the evening or even the second game. It is meant to be a light and casual game that can be played anywhere, anytime, with any number of people. The game delivers on these points and doesn’t try to be anything more than what it claims to be. If you are looking for a simple to learn and easy to play risk versus reward dice game, Grablin is sure to please.

One Response to Grablin Game Review