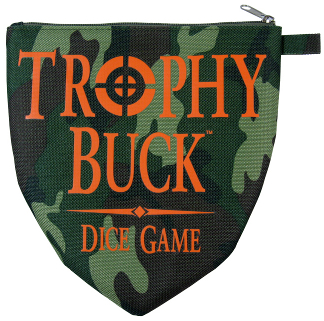 Quietly, you move through the treeline, looking for any signs of movement on the horizon. Pausing for a moment, you carefully examine a set of tracks. They look to be fresh, big, and heavy. There’s a buck nearby. As your heart rate increases, you do what you can to settle your nerves. If the majestic animal is still close, you’ll need to position yourself and wait. Or should you press on and keep looking, in hopes of sneaking up on the deer? Make a choice and risk it all or play it safe. Just keep in mind that no legendary hunting story ever began with, “So I called it a day and went back home.”

Trophy Buck, by Steve Jackson Games, is comprised of 12 six-sided die and a dice bag (that is also used to contain the game).  The images on the dice are easy to identify, allowing hunters to quickly spot the differences in the die values and what actions they need to take. Not included in the game, but nice to have, is a pad of paper and a pen or pencil to record the hunters’ points. 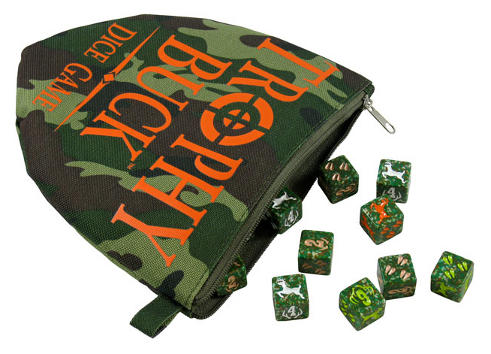 The goal of the game is to be the first hunter to collect 36 or more points. To collect points, a hunter must carefully consider their chances of success when hunting for very skittish deer. This is done by reading the dice values and then making an informed decision on how much longer pressing the hunter’s luck will be worthwhile. The die values and a brief description of each follow:

The colors of the die (brown, white, green, and orange) can be used as a quick reference to determine the size of the deer the hunter is currently tracking (i.e. rolling). Each color represents the size of the deer, but also how much smarter the deer is, too. The smarter the deer, the harder it will be to hunt them. Of course, the smartest deer are also the biggest, having outwitted hunters for many years.

As you can see, the more points the Buck is worth, the harder it will be to track and hunt them.

To set up the game, simply have the hunters sit around the playing area. One hunter should keep track of all the points for the others. We’ll call this individual the Score Keeper.

On the hunter’s turn, they will randomly select 3 dice from the dice bag and roll them. Based on the rolled values, the hunter will now do the following:

If the hunter has collected 3 or more dice that show a startled deer, their turn is over and no points are recorded by the Score Keeper. All the dice are returned to the dice bag and passed to the next hunter going clockwise.

If, however, the hunter has 2 or fewer dice that show a startled deer, they can choose to do the following:

Once the player chooses to stop and score, the Score Keeper will also determine if the end game condition has been met. Regardless, all the dice are returned to the dice bag and passed to the next hunter going clockwise.

As soon as a hunter has scored 36 or more points, the Score Keeper announces all the points earned by the hunters so far and the round is completed, ensuring that all players have had the same number of turns.

Once every hunter has completed their turn, the Score Keeper again adds up all the points and declares the hunter with the most points the best (and luckiest) hunter for the season!

My little geeks already enjoy Zombie Dice and Martian Dice, which are more or less the same type of game as Trophy Buck. As such, I think they’ll have zero problem playing the game and it is only a question of them enjoying the game’s theme and narrative. To some degree, this game is going to be a toss-up as I have never taken my little geeks hunting, nor do I actively hunt (which is something of a sore point at extended family gatherings). Nevertheless, the game appears to be solid.

Teaching the game was…well…I didn’t have to. My little geeks looked at the dice, asked what the die values meant, and knew how to play the game just from my brief explanation. This is based on their prior experience to dice games, however, and I don’t want anyone reading this to think you can just plop down Trophy Buck in front of a 5 and 8-year-old and expect them to play it without much in the way of game explanation. As I have said many times, games become easier to teach and to learn the more times you play them. Start your little geeks early and they’ll have a hobby for life they will enjoy be challenged by.

And so, without any need to go into any detail with my little geeks concerning game play, we got set up for our first game. As I put the dice tray in the middle of the playing area for our first game, I asked them their thoughts on the game based on what very little I told them.

“Looks easy enough. We are just fighting deer instead of zombies or aliens.” ~ Liam (age 8)

We are all set for our first game! Let’s go see if we can bag some fun or find that this dog won’t hunt.

My little geeks had zero issues with the game and played it like champs. Again, this is due largely in part of their past gaming experience. My 5 and 8-year-old were taking smart risks and pushed just enough to get points without ever pushing too far, resulting in points being earned every round. This made the game exceptionally hard for me to win, which I loved. I was also greatly pleased that lack of any hunting experience or understanding of the sport did nothing to reduce their level of enjoyment of the game.

Parent Geeks enjoyed the game, and some more than others. Some of the Parent Geeks, who are also hunters, were very pleased that they were able to play a game about hunting. It didn’t take long (by my watch, only about 2 minutes) before hunting stories started to fill the gaps between players’ turns. One Parent Geek said he was going to pick up the game to bring with him to Deer Camp this year. For those of you who don’t know what Deer Camp is, watch the movie Escanaba in da Moonlight.

Gamer Geeks, who were all too familiar with Zombie Dice and Martian Dice, played the game, said it was nothing new, and thanked me for my time. 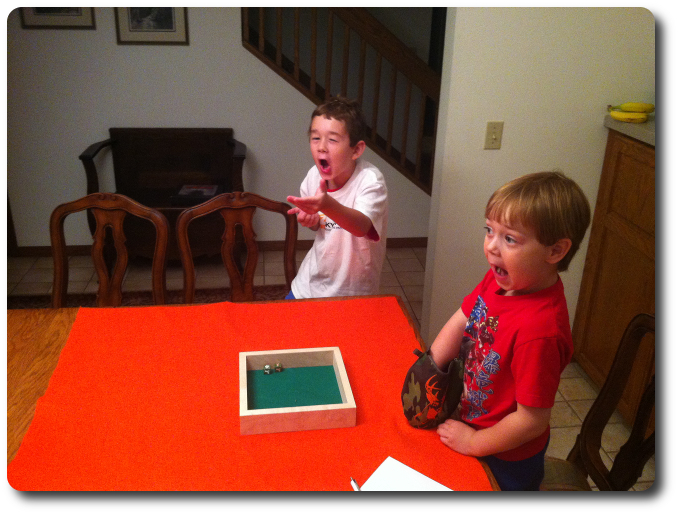 My two little geeks act out a quick scene of hunter vs. deer.

Gamer Geeks, if you are not already familiar with dice rolling games like Trophy Buck, you’ll enjoy the initial challenge of pushing your luck and getting points. But the game lacks significant depth to keep your interest for long. An excellent  exercise in risk assessment, but not enough in the way of game play to make it an experience you’ll seek out.

Parent Geeks, be you a hunter or not, this game is a good one to play at your family table. It is light, fast, and simple, and can be played with a large group of people. It’s a great game to break out if you are just looking for some quick fun or if you want to play something that doesn’t require everyone to stop socializing. Easy enough for the non-gamers to understand and accessible enough for the Child Geeks, this game will be playable by just about everyone and anyone.

Child Geeks, Trophy Buck  is a fast and fun game where you get to try to outsmart those skittish deer! You’ll need to play with caution as you don’t want to push your luck too far when hunting. If you go too fast or don’t think through your moves, you won’t be wining any points. This is a game of balance and being satisfied with small gains that will lead to big wins. Focus on always getting points, no matter how small, and you’ll do great in this game!

Personally, I found Trophy Buck to be just a bit too simple. It didn’t challenge me anymore than Zombie Dice and the game’s theme and narrative did little to draw me in. You don’t have to be a hunter to enjoy this game, as proven by the Child and Parent Geeks, but it would certainly help. I think the most important part of this game is that it will appeal to non-gamers who are also hunters. Oftentimes, the game that will get a new player to the table is one that sounds interesting. It’s hard to get a hardcore hunter excited about games that involve trading wool for brick. But a game where a big trophy buck can be won is sure to bring a smile to their face.