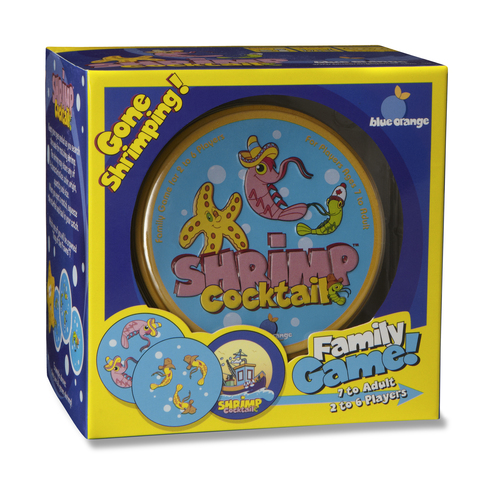 The mighty oceans are deep and vast, and can award a skipper of a shrimping boat endless bounty if they know where to look and are quick to react. The shrimp are there for the taking, but keep a steady eye on the horizon! Other shrimping boats sail these waters and mean to catch the same shrimp you are counting on. Looks like a simple and relaxing fishing trip just got serious. Roll up your sleeves and lock your eyes on the prize. There’s shrimp to win!

Shrimp Cocktail, by Blue Orange Games, is comprised of 81 Shrimp cards, 3 Fishing Zone cards, and 1 Squeaky Starfish (yes, you just read that right). Shrimp Cocktail is part of Blue Orange Games’ pocket line, which means the entire game fits in a small tin can. This makes the game highly portable and easy to bring with you to just about anywhere you would want to go and play games. 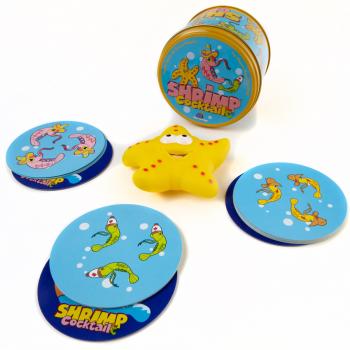 Example of the game bits and the little Squeaky Starfish

Getting the Boat Ready

Now shuffle and divide the Shrimp cards into as many piles as there are players. This should be done as evenly as possible, but it is not necessary to count the cards to ensure that each player has the same number. Players keep these cards face-down in front of them. This is the referred to as the player’s Shrimp Pile deck.

Finally, place the Squeaky Starfish in the center of the playing area and within easy reach of all the players. Make sure everyone gets a chance to squeaky it so they know how hard they need to grab it to make a noise.

That’s it! Time to go shrimping!

A Quick Lesson on Shrimp

Shrimp come in different sizes, colors, numbers, and nationalities! A captain of a shrimp boat must be able to quickly scan the Shrimp cards and see what common characteristic all the shrimp share, if any.

The youngest players starts first and places the top card from their Shrimp Pile deck on one of the three Fishing Zones. Cards are flipped quickly in a way that the owner of the card sees the card’s face at the same time as the other players. When determining which Fishing Zone to place a card on, Shrimp cards must always be placed first on a Fishing Zone that does not have any shrimp. After that, players can place their Shrimp card on any Fishing Zone they like.

As soon as there are three or more Shrimp cards on the Fishing Zones, all the players now look for common characteristics shared between the three piles. If there are none, play continues going clockwise. If a player should find any of the following, they should quickly reach for and squeeze the Squeaky Starfish, announcing one of the following matches, regardless if it is their turn or not:

Incomplete characteristics do not penalize a player. Instead, the player only collects those cards that match the characteristic they called out, leaving the other cards in the Fishing Zone.

The game ends one of two ways. The first is if a player correctly identifies and matches a Shrimp Cocktail. This player is automatically the winner. Otherwise, a player who only has one Shrimp Card left in their Shrimp Pile should shout, “LAST SHRIMP CALL!”. All the players now play one more round. Once completed, all the players now count the Shrimp cards in their Catch Pile (the cards, not the number of shrimp on each card). The player with the most cards wins the game!

My little geeks tend to dislike the games that require them to act fast and think even faster. Such games can quickly become ordeals rather than entertainment. And can you blame them? Imagine if you had to learn something new, be it at home or at the office, and you had another individual suddenly jumping in front of you taking whatever it is you are trying to complete. I know I would be annoyed (to put it mildly) if such a thing were to happen, and I’m an adult. Now imagine the same level of frustration from a little geek’s perspective without years of social conditioning to stop any outward display of complete frustration. Ever see a little geek who wants to flip the gaming table? It isn’t pretty.

The trick to teaching this game with my little geeks will be to focus on all the possible patterns that can be collected. Since this is a matching game, knowing what they need to look for is the most important aspect of game play I need to teach. Speed will come with familiarity. For the Parent and Gamer Geeks, they are on their own.

Teaching the game doesn’t take long, as this is a very simple game. Even so, I spent a good 5 or so minutes explaining and demonstrating (slowly) all the different patterns. This was a frustrating exercise for my little geeks at first, but as they become more familiar with how the game was played, they started to enjoy it. And so, after ensuring that my little geeks had no further questions, I reset the game for our first play. As I did so, I asked them their thoughts on the game so far.

Looks like both the little geeks are ready to play and already thinking of how to utilize the game bits in other ways. Let’s go fishing and see if we catch some fun or leave empty-handed.

As expected, my little geeks were initially very frustrated by this game, but they very quickly caught on and held their own for the first and second game. By the time we were playing our third game, they were taking as many sets as I was and faster at reaching the starfish then I ever could be. It was a joy to see them work through their different levels of frustration and focus on the game at hand. While my 8-year-old was a stronger player than his brother, my 5-year-old was able to very quickly find sets and score points, including beating his older brother.

Parent Geeks also enjoy the game, especially when playing it with their family. Shrimp Cocktail can comfortably sit 6 people and takes very little space to play. This made it perfect for the family gaming table and as a travel game to take on vacations and trips. A few of the Parent Geeks were also familiar with Set, a game that has the players look for matching characteristics in cards. They found Shrimp Cocktail to be a much more accessible and less abstract game, but no less challenging.

Gamer Geeks enjoyed the time they spent playing the game with family and friends, but unanimously agreed it was not going to be a game they’d seek out. 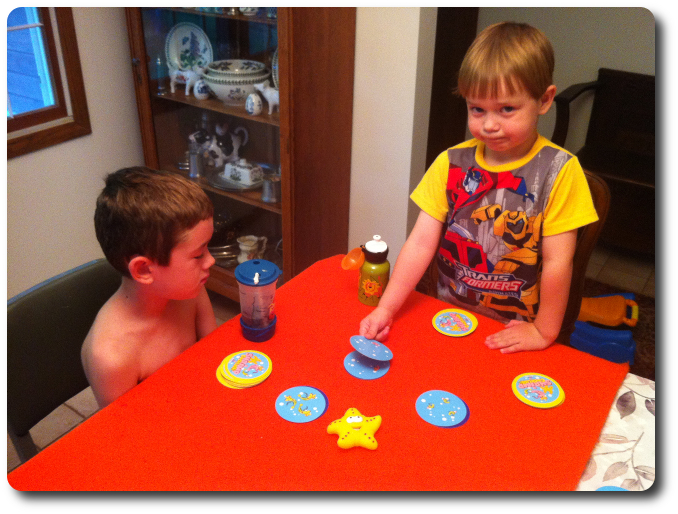 Gamer Geeks, this is not a gamer’s game, but a good one all the same. You might not be playing it with your gaming group anytime soon, but I doubt you’ll find your time with the game a waste of your talents. It will require a quick mind, a darting eye, and lighting-like reflexes to play the game well. This is especially true if you are playing with your own age and experience group. But in the end, this game is too simple and lacks any depth to be a hit and center piece at your elite gaming table.

Parent Geeks, this is an outstanding game for the family and will let the Child and Parent Geeks all play together to enjoy the experience. The challenge comes in staying focused. Speed certainly helps, but won’t come into play unless another player sees the matches at the same time. Most of the Parent Geeks observed that this happened only when the match was obvious, which resulted in the whole table reaching for the starfish and a lot of laughter followed by shouts of dismay. A great time and a fast game for all to enjoy.

Child Geeks, this is a game that will test your patience from the very start, but has an easy learning curve and satisfying game play. The amount of joy you will feel when you smack that starfish is indescribable, especially when you look across the table and see a Parent Geek shaking their fists in the air in bitter frustration because you beat them to it. Keep focused and keep watching the table. You will need to be quick to reach that starfish, but even quicker with your mind. Perhaps best of all, this is a game you can get better at just by playing it. Play the game enough and you’ll be stealing points away from the Gamer Geeks in no time.

If you are familiar with the classic game, Set, you already know how to play Shrimp Cocktail. However, I find Shrimp Cocktail to be a much less frustrating game. When I first played Set, I found the game to be terribly abstract and the people who had played it before had a huge advantage over the new players. The matches were not terribly complex, just not easy to spot when first playing the game. Shrimp Cocktail has reduced this level of difficulty but none of the challenge or fun. With only three cards to look at any particular time, there is just enough information on the table to keep the mind engaged and thinking rather than overheated and blown. The end result is a fun and fast game you can play with just about anyone.

If you are a fan of Set or are looking for an action/dexterity card game where a quick mind and hand result in a satisfyingly loud squeak of a toy starfish, you should grab yourself a copy of Shrimp Cocktail. Just make sure you keep that starfish away from the family dog.