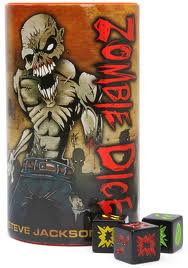 Zombie Dice, by Steve Jackson Games, is a press your luck dice game lovingly wrapped around a zombie theme. Game play is very straight forward, but there is also an element of risk vs. reward which makes an otherwise dead simple game slightly more complex. Emphasis on the “slightly”. The game is still very simple, but that is part of its charm. Zombie Dice is fast which means it’s great for parties, quick filler games, and most importantly, little geeks.

When playing this game, you are taking on the illustrious role of a zombie. As can be expected, zombies are not that smart which means as a player your choices are limited. You can either eat brains or chase humans. If you choose to keep chasing humans, you roll the dice. Each dice represents 1 human you are chasing who will either run away, shoot you, or get caught and eaten. If you choose to eat brains, your zombie sits down, ties a bib on, and slurps down some hot, salty brains. Yum!

In total, the game comes with 13 dice. The dice are of high quality and are easy to read. Each die has three icons and come in three different colors (green, yellow, and red). The icons include the “brain” icon which counts as 1 point each, the “shotgun blast” which you do not want to roll, and the “footprints” which represent a human running away, screaming.

The dice colors are meaningful because they represent the level of difficulty of rolling a “brain” icon, or more importantly, the odds of your zombie being shot. As I previously mentioned, the dice represent 1 human each. Some humans are easy to grab (green dice), a smaller group have some survival skills (yellow dice), and a limited few are downright dangerous to your zombie (red dice). The green dice have 3 “brains” and 1 “shotgun blast”, the yellow dice have 2 “brains” and 2 “shotgun blasts”, and the red dice has 1 “brain” and 3 “shotgun blasts”. All dice, regardless of color, have 2 “footprints”. Your odds of rolling a “brain” are higher with green dice and much lower with red dice. As a player, this gives you the ability to do some quick risk vs. reward comparison when deciding to stop your turn or not.

On a player’s turn, they randomly select 3 dice from the Zombie Dice container and roll them. The goal is to roll as many “brain” icons as possible. Once the three dice are rolled, the player puts the “brains” rolled to their right, the “shotgun blasts” to their left, and keeps any dice with “footprints” in front of them. The player must now make a choice. They can either stop and eat the brains they have rolled or keep rolling. If they stop, the player adds the number of “brains” rolled to their total score. If they continue to chase humans, they pick up any dice with “footprints” showing and then randomly select a number of dice from the container until they have three dice to roll.

A player’s turn can end 1 of three ways. The first is the player chooses to end their turn. When they do, they count the number of “brains” rolled this turn and adds that number to their total score. The second is the player rolls 3 or more “shotgun blasts”. If this happens, the player looses any and all brains rolled this turn. The third, and most unlikely, is that they roll 13 “brains”, which means there are no more dice to roll and they automatically win the game.

Play continues until one of the players has 13 or more points. At which time, the game round is finished. The winner of the game is the player with the most brains..err, points at the end of the game. To the victor go the spoils of a zombie holocaust (which is, presumably, more brains) and the rest, I am guessing, keep doing whatever zombies do. Which is walk around aimlessly, mutter “brrrraaaaiiinnnnsssss”, and being a nuisance.

Anyone have a sword handy? I need to fall on one and here’s why.

At Gen Con 2010, I had a chance (albeit a brief one) to play Zombie Dice. It was offered to us as a quick filler game while we waited for another game to start. The rules were explained, quickly, and we all started playing. The experience was not a great one. The game didn’t make much sense, the scoring wasn’t clearly explained, and we more or less bumbled our way through it for 3 minutes or so before the scheduled game got started. The entire experience left me with a bad taste in my mouth.

Fast forward to November 2010, and my three boys and I are at a local game store. I am friends with the folks behind the counter and they let my sons play with the games. One of those games was Zombie Dice. I explained the rules as I understood them to my two oldest and we played the game. It confused my boys and, again, left me frustrated.  So frustrated, in fact, that I gave Zombie Dice my pick for the “Worst Game of 2010” and said as much on the Dice Tower episode 195.

That brings us to the present. The Dice Tower episode 196 mentioned briefly that the  Zombie Dice iPhone/iPad application was available for free from iTunes. I downloaded it on a whim to see if they improved the game or if it still stunk like a corpse in the sun. Boy, was I surprised.

It was the same game in every way. However, for the first time I actually was given a good explanation about the game rules. I suddenly found Zombie Dice to not be a bad game, just a misunderstood one. I immediately went out and bought the real game from my friendly local game store and taught it to my two oldest sons the right way. And you know what? They loved it.

Loved it so much, in fact, they want to play it a good deal. This is especially true for my 3-year-old. He loves rolling those dice and making zombie noises, cheering when he rolls brains, and shouting “Argh!” when he rolls a shotgun blast.

The lesson learned here is to give games a chance. Sometimes more than once, or even twice. The way the game is presented to you qualifies as a “first impression”, and we all know how the old adage about first impressions goes. But it’s because of this we should be open to the idea that everything deserves a second look. Yes, there are some very frustratingly bad games on the market today. But I argue that the majority of games are good to great, just not for everyone. More to the point, what makes a game good or great is tied directly to the person or persons who play the game. Some of us love Settlers of Catan and some don’t. Does that make the game great or bad? Again, depends on who you talk to.

I couldn’t be more pleased that I gave this game another chance. If I failed to do so, I would be missing out on some fun times with my sons and that is simply tragic. In the end, buying this game was a no braiiiinnnneeerrrr….