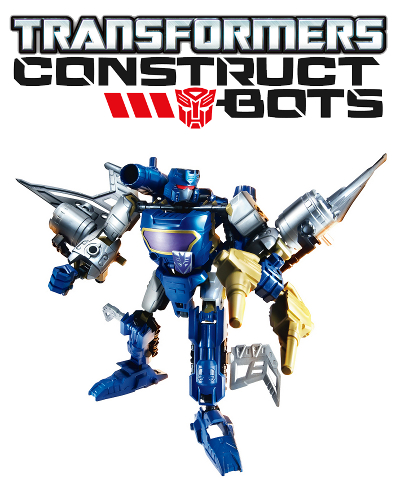 Ever since the mid 1980’s, I have been fascinated with the Transformers. As a child, I played with them for countless hours, acting out epic wars with my brothers and friends. As a parent, I get to play with the “robots in disguise” with my little geeks. Throughout the years, I have seen many Transformers  introduced to the market. Sometimes I like them, but oftentimes dismiss them as garbage. I’m curious to see how the newest bots on the block will fare…

Transformers Construct-Bots are Hasbro’s newest Transformer toys. The owner of the toy will need to build it using small to medium-sized plastic pieces. Additionally, the parts can be interchanged between different models, which allows the toy owner to build any type of robot or vehicle they can imagine. If you are familiar with LEGO’s Bionicle toyline, you will feel right at home with Hasbro’s new Transformers Construct-Bots.

For this review, we will be focusing on the “Scout Class” Starscream and the “Elite Class” Soundwave. 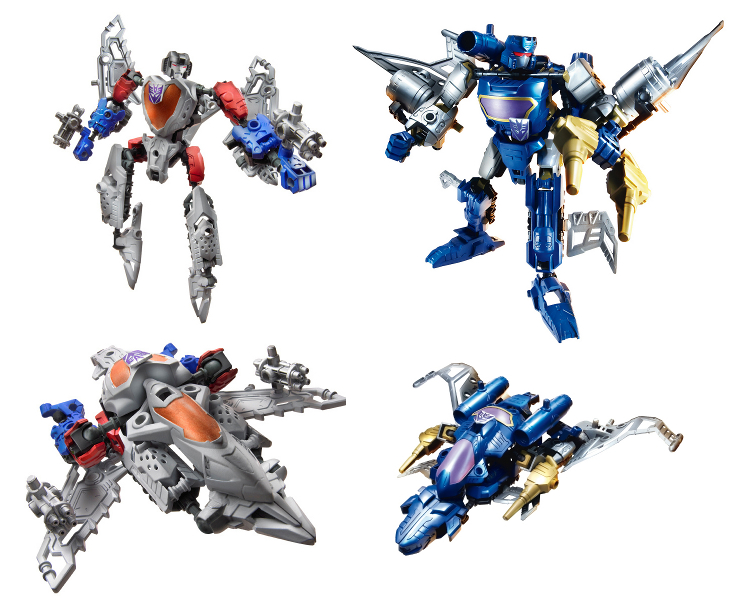 Regardless of the model, each Construct-Bot has the same type of parts. Specifically, ball-and-socket joints, peg-and-socket joints, and a what some would referred to as ratcheting clips. No tools are necessary to build the Construct-Bots, but individuals with large hands might have some difficulty with the smaller pieces. The three different part types come in different colors and shapes, but all share the same dimensions when it comes to connecting locations.

Each model includes a detailed instruction book with visual examples. The number and type of piece are clearly shown and guide arrows are provided to demonstrate how the pieces interlock and in which direction the toy should be rotated to provide the correct orientation for piece placement. Starscream has a total of 40 pieces and Soundwave has a total of 48 pieces. All of the Child Geeks we placed the toys in front of had no problem following the instructions and retrieving the correct pieces. The most difficult aspect of the construction phase is simply staying on task, as it could take up to 15 minutes to build the model the first time it’s opened.

When the models were built, the Construct-Bots had a surprisingly large range of articulation.

Once the Construct-Bot is built, it can be converted into its vehicle form. Transforming the Construct-Bot does not require it to be broken down into its different piece parts. Rather, and due to the many articulate joints the model is comprised of, it can be converted with just a few twists, turns, and snaps. This is identical to how the other Transformer toys operate, with the robot and vehicle being one-and-the-same.

Both Soundwave and Starscream convert into Cybertronian jets.

Finally, we come to what I think is the most interesting and exciting aspect of the toy. All the pieces, regardless of what model they came from, are interchangeable. If 2 or more models are made available, the player can interchange the parts to create a new Transformer that could, theoretically, convert to a new vehicle. One or more robots could combine to form a larger robot, even. Not that I said “in theory”, as the act of building a robot or a vehicle is easy enough, but constructing it so it transforms is a difficult task. Still, the ability to do so is there, which opens the door to near endless customization and creation possibilities. Hasbro is helping to promote their new toy by inviting creative fans to share their new creations. These are then shared and made available from the Hasbro website where fans can view and vote on what they think is the coolest.

My little geeks and I are big fans of Transformers. We are currently loving the Beast Hunters series and we spend a great deal of our time on the floor playing with our Transformer toys. I have no doubt the Transformer Construct-Bots will be a BIG hit with my children and their friends. I think the Parent Geeks will also enjoy it, as the toys allow for creativity and imagination.

“I really like how you can build them, then transform them, and then build your own robot!” ~ Nyhus (age 6)

Looks like all my little geeks (and their father) are very excited to try these new Transformers out! Let’s open up the packages and give them a go.

The Child Geeks, as predicted, loved the Transformers Construct-Bots. I’d quote my little geeks and their friends, but I honestly don’t know how many times I could write “Awesome” or “These are the best” and keep it interesting. Every Child Geek who had a chance to play with the toys enjoyed them. When it came time to vote for the Child Geeks’ endorsement, they looked at me as if I just asked them the dumbest question in the world. Which, I guess I had…

Oddly enough, my little geeks didn’t want to create new robots. They were very happy with the original models and how they were constructed. To be sure, they traded pieces (such as weapons or wings), but they wanted to keep the Transformers as “realistic” as possible. If more pieces were available, perhaps I’d see additional customization, but for now, they are more than happy with what they built right out of the box. 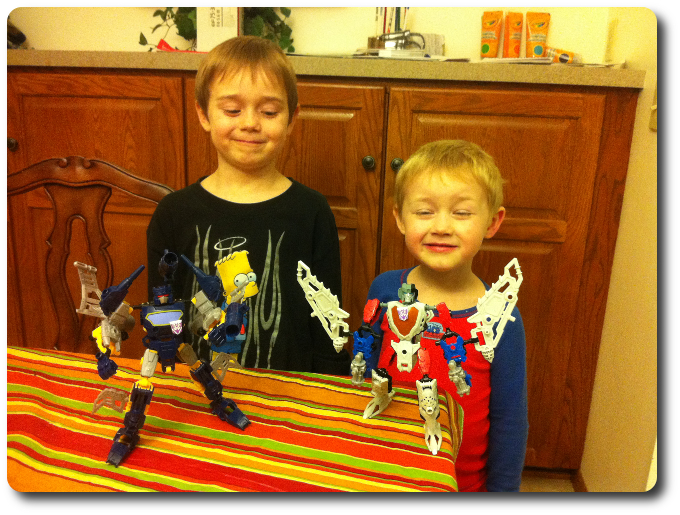 My two youngest little geeks stand behind their Transformer (my 4-year-old had help, but not much)

The Parent Geeks were less thrilled with the Construct-Bots, but nonetheless pleased with the toy results. According to one Parent Geek, “I like how the toy challenges the child to build the robot and I really like how it can be rebuilt into whatever the child likes, but I’m not that thrilled about all the pieces.” Yes, for any Parent Geek who already dreads walking through the house at night due to the very HIGH probability of stepping on a LEGO piece, Transformers Construct-Bots will do little to alleviate any anxiety. But when it was all said and done, the Parent Geeks just sat back, smiled at their children, and gave the toy their collective thumbs up. According to on Parent Geek, “If a toys makes my kids that happy, it’s got to be good.”

Transformers Construct-Bots is a good toy, but let’s not go crazy fanboy’ish about it. If you have ever played with LEGO Bionicles or LEGO Ben 10, all that the new Transformers Construct-Bots are bringing to the playroom is more of the same. Except for two important differences. First, these are fully licensed Hasbro Transformers. The heroic Autobots and the evil Decepticons are all represented and well done. Second, the toys actually transform without having to be rebuilt. That, in and of itself, is pretty cool and brand new. All other action figures you have to construct have slightly less articulation and have to be rebuilt if the individual wants it to look different. To be sure, that is still the case with the Transformers Construct-Bots, but it’s no longer necessary. Indeed, it’s a perk. If you want to create a brand new Transformer, you can. The only thing stopping you is the limitations of your imagination.

I am greatly pleased with the new Transformers Construct-Bots and think they will be well-loved at my home for a long, long time.