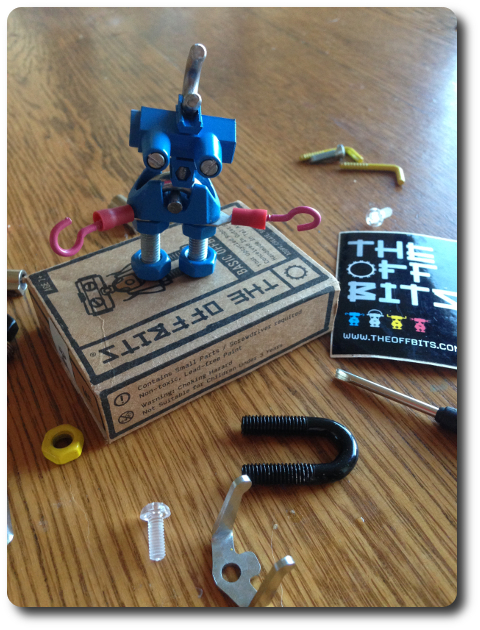 Henri Bergson said, “There is no greater joy than that of feeling oneself a creator. The triumph of life is expressed by creation.” Be it paintings, sculptures, music, movies, or dance, we create something not from nothing, but from pieces of ourselves. Feelings, fears, and hopes can all be blended and presented for others to perceive and ponder. Using The Offbits, the individual is asked to do one simple thing: create. But creation is more than just rearranging bits. It’s also an act of self-exploration.

The Offbits Basic Kit, depending on which one you receive, will be comprised of a small number of parts. The Basic Kit we received contained  a small tool, magnet, a small number of nuts, “U-shaped” metal parts, and various other plastic bits. All the bits are upcycled. For those not familiar with the term, upcycled bits and components are considered waste and doomed to be thrown away. By upcycling, you take the unwanted and make them useful again. 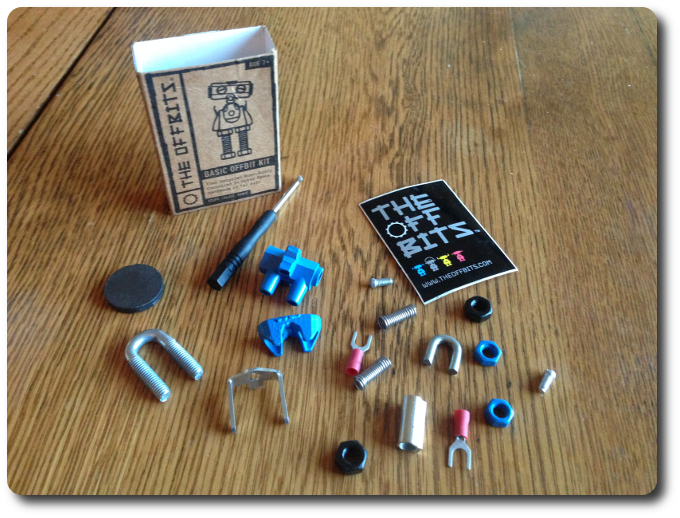 Each bit in the kit is meant to represent pants, legs, arms, and other recognizable parts of the small robot. However, the builder is by no means restricted and is encouraged to build their Offbit anyway they like. This includes going down to the local hardware store and purchasing additional bits or removing bits from no longer needed contraptions in the house. The act of building the Offbit is meant to be a personal and creative experience. Instructions are provided if an individual needs them, but at the same time, there is no single right or wrong way to build the robot. Individuals are encouraged to jump off the beaten path and discover new ways to create. 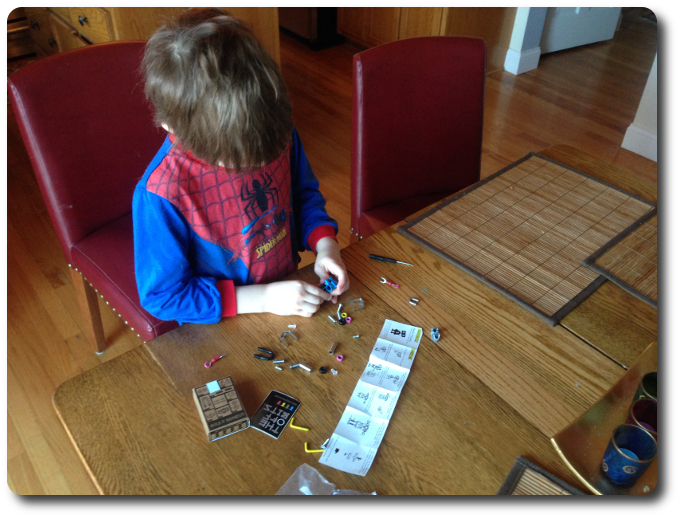 My son looks through the kit, reads the instructions, and decides to do his own thing

That being said, the bits do not always fit together easily. The Offbits is a collection of parts that are intended to work together. Unfortunately, they do not always work together seamlessly. For example, the nuts might not always thread easily or the  plastic portions might not easily fit over metal bits. For an adult, this is hardly a problem. A bit of muscle usually fixes the issues. But for Child Geeks, this can be a stopping point they cannot worked around. Consequently, this also limits a Child Geeks’ creativity and ability to continue to create. If a Parent Geek is around to assist, it really isn’t an issue. If the Child Geek is doing it themselves, expect high levels of frustration. Of course, one must consider the positive benefits of not having everything work together easily. Problem solving goes hand in hand with creativity. If the Child Geek runs into a roadblock, they’ll be all the better for it if they solve the problem themselves.

If a individual is having trouble, The Offbits makes for an excellent team exercise. Combining brain power with creative energy sparks new and interesting ways to use the bits contained in the kit. Of course, egos will oftentimes butt heads, but this is part of the creative and cooperative process. This makes The Offbits an interesting candidate for team building exercises at the office or in the classroom. 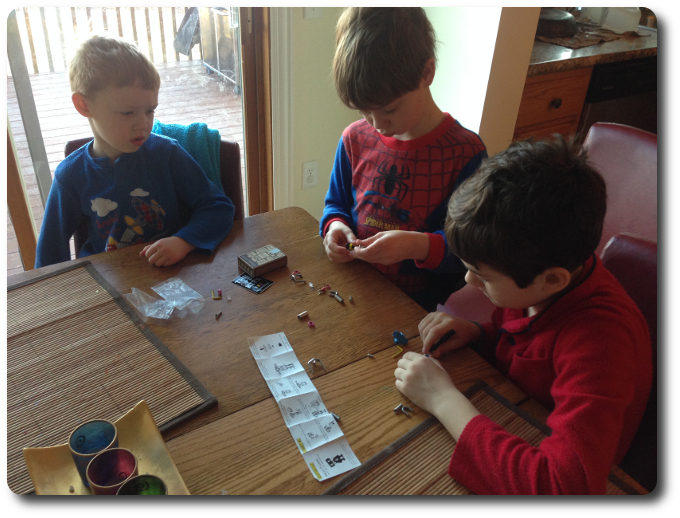 The Three Brothers discuss how to build the Offbit bot

To learn more about The Offbits, visit the toy’s website.

While the Parent Geeks were involved during our review, it was the Child Geeks who took charge. They grabbed the box, dumped the bits, and got to work. Right from the start, it was clear that their young minds had no problem visualizing the creation they were working on. This included Child Geeks who had no idea what a bolt, nut, or washer even was. The name of the bit was never important; only the ways it could connect to other bits. To quote one Child Geek, “The really challenging part of this is not understanding how pieces don’t go together, but learning all the many different ways the pieces do go together.” Another Child Geek said, “This is a lot harder than LEGOs, but I like that we have to use tools to build it. Makes me feel like I’m really building a robot.” All the Child Geeks really enjoyed themselves, but not without bouts of extreme frustration. A number of times, the bits looked like they should fit together, but didn’t, and there were even more times that the robot created didn’t always stay together. The Child Geeks took this in stride and challenged themselves to make a better robot. Which they did. All the Child Geeks voted to approve The Offbits. 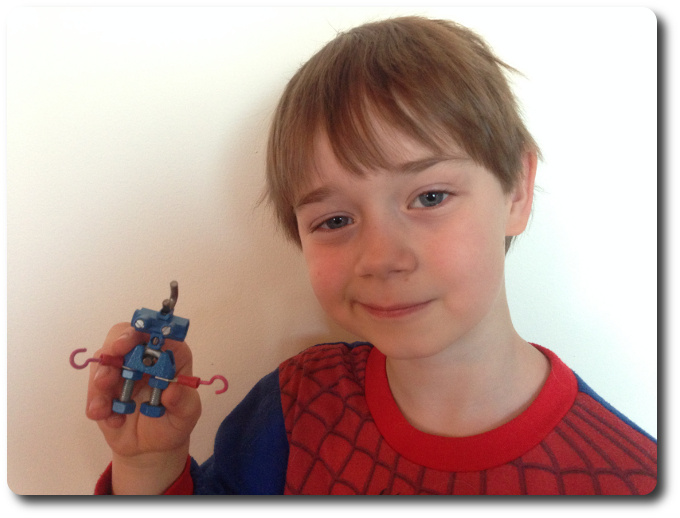 My son’s first (but by no means last) attempt to build a robot – Pirate hook hands for the WIN!

The Parent Geeks were most pleased with the level of creativity and problem solving The Offbits Basic Kit facilitated, but were originally skeptical. According to one Parent Geek, “It just looks like a pile of parts to me. Reminds me of my Erector Sets I had as a kid.” After the bits were placed on the table and the building began, the Parent Geeks quickly started to like the toy. One Parent Geek said, “It is frustrating when a part doesn’t fit with another, but all that does is force the builder to think of new and better ways to use the bit.” Another Parent Geek said, “I love LEGOs, but this is something new. It breaks the  idea that each block only has one way to connect. Bolts and nuts can be anything you can imagine.” The Parent Geeks all voted to approve The Offbits, finding it to be a fun and creative toy for both their children and the family.

The Offbits is a fun and creative toy that challenges the would-be robot builder to consider all the many different possibilities their own robot can be built. This makes every robot unique and personal. Better yet, a robot can easily be dismantled, stored, and rebuilt again whenever an individual likes. It’s small parts demand little space without reducing the demand on the player’s creative mind. Perfect for small spaces for building and just the right size to display on bookcases.

I am not happy with all the components. Some of them simply do not fit together. I had to put in some serious muscle to get a bolt to thread, for example. And there are a few instances where the bits fit too loosely, making it difficult to keep some of the robot together. Overall, I was pleased, but my pleasure was oftentimes tested by some of the overtly difficulty bits. Imagine the frustration you would feel if you were building a shelf and part of it didn’t fit. That’s what the Child and Parent Geeks felt when they were building their robot, and I shared in their frustration. But the few hardships were outweighed by the fun of creating your very own robot.

For those who enjoy building with blocks, do give The Offbits a try. It’s an excellent blend of creativity and problem solving that melds to form a very adorable robot you’ll be proud to display. Each creation is one of a kind, distinctive, and conversation worthy. While they won’t be taking over the Earth anytime soon, do expect your Offbit robot to take over your heart. Awww…sappy.

This product was given to Father Geek as a review copy. Father Geek was not paid, bribed, wined, dined, or threatened in vain hopes of influencing this review. Such is the statuesque and legendary integrity of Father Geek.