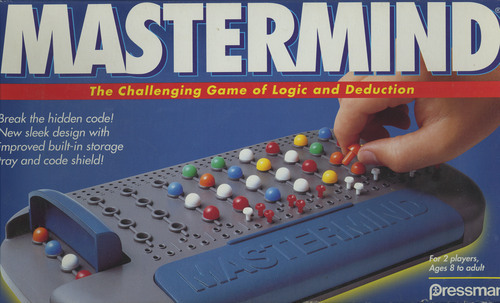 Mastermind is a game that requires a player to use logic and deductive reasoning skills to determine, through trial, error, and some luck, the sequence of colored pegs their opponent has secretly placed. Careful attention to detail is a must in order to successfully compete. The answer to the puzzle is hidden, but perseverance will ultimately win out in the end, if you don’t run out of guesses first.

This game is comprised of a single peg board with 10 rows with an area for the secret code to be placed at one end, a large number different colored “Code Pegs”, and a large number of different colored “Key Pegs”. All the components are solid plastic and very durable. It should be noted that the pegs are very small and do represent a serious chocking hazard. If you have baby or toddler geeks, best keep this game up on a table and every piece accounted for.

Game set up is very simple and quick. First, decide how many rounds will be played. A single round involves both players taking a turn as the Codemaker and the Codebreaker. Next, decide the players’ starting roles. Note that these roles are reversed at the end of every turn in a round, meaning each player will take on both roles once during a single round.

On a player’s turn as the Codebreaker, they have 10 attempts to “break” the code. The code is the sequence of colored Code Pegs created by the Codemaker and  must be reproduced in one of the 10 rows of the board. While this might sound like a tiring exercise of trial and error, the Codemaker provides hints based on the pegs in each row. This allows the Codebreaker to logically make their next choice of pegs by using basic deduction. The goal for the Codebreaker is to break the code using as few rows as possible.

When the Codebreaker completes a row, the Codemaker places the Key Pegs next to that row, one for each Code Peg placed (so, a possible of four in total). The Key Pegs tell one of three things depending on their color, but not their placement.

If the code is solved, the Codemaker reveals the code and is awarded 1 point for every row used (i.e. has pegs in it). If the code is not solved by the time the 10th row is filled with Code Pegs, the Codemaker is awarded 11 points (1 point per row, plus 1 additional bonus point). Regardless of the outcome, the roles are now reversed and the game set up is once again initiated.

The winner of the game is the player with the most points at the end of the decided upon game rounds. The actual game length is determined by the players (1 round, 2 rounds, 3 rounds, etc.). For longer games, add more rounds. For a shorter game, reduce the number of rounds to 1 to 3 rounds.

The complete rules can be reviewed from Pressman Toys.

I predict that Mastermind will not do as well as Animal Mastermind Towers for two reasons. First, the game is very abstract. My oldest little geek will need to focus on the Key Pegs to help him make choices. What the Key Pegs represent can be confusing at first. Second, this game requires a great deal more of the player’s attention. Learning new games takes mental energy and sometimes tightly focused concentration. Mastermind requires the same amount of energy and concentration to learn as well as to play. This might burn out my little geek’s brain and patience.

After I explained the rules to my son, gave several examples of how the Code Pegs are placed followed by the Key Pegs, explained several times what the Key Pegs mean, and provided suggestions on how to use previous Key Pegs to determine what Code Pegs to play, I asked him his thoughts on the game from what he was just told. His response?

This game is really confusing.

Well said and to the point. You gotta love that about kids. So, with many an Animal Mastermind Towers under his little belt, we bravely go forth to conquer Mastermind! Will the game be met with success or bitter disappointment? Let’s find out.

Well, slap my bald head and call me Egbert, my oldest little geek loved the game! I never would have predicted this and was completely surprised that he enjoyed himself enough to want to play several rounds. In truth, he said he enjoyed Animal Mastermind Towers more than this game, which is not surprising. Honestly, I wouldn’t have put money on this game as a winner; not with a 6 year old. I guess you really can learn something new every day.

We played this game slightly different than the rules state. This might also be why he enjoyed the game. In quick summary, I was always the Codemaker and my son was the Codebreaker. This was necessary because, again, the Key Pegs can be confusing. In addition, we handled the scoring differently. If he broke the code before he finished 10 rows, he won the round. Since we were playing 3 rounds, he had to win 2 out of the 3 to win the game.

An unforeseen bonus result of this game was a very noticeable uptick in my little geek’s emotional control when he lost the first round, the stress he must have felt while playing was very noticeable. However, he was strangely quiet and contemplative throughout the game. It gave me chills. Here was a very brief and dazzling look at what was to come and who my little geek would one day be. Was I proud? More than words could say, and we had a wonderful time playing. I do not know when we will get Mastermind out on the table next, but it was well worth our time when we played it.

While my son played the game at age 6, I recommend you play this game with little geeks at least age 8 or more. The game really is meant to play one person against another, with each player taking on different roles. Unless both players place the Key Pegs correctly, the game will quickly fall apart with bad information being provided by the Codemaker. It is therefore imperative that both players understand and follow the Key Peg rules to the letter at all times, and it is for this reason alone, older little geeks are better suited.

Personally, I like this game. It is a simple 2-player deduction game that is not terribly demanding time wise and allows for a good deal of social interaction while playing. It is not “heavy” with game mechanics or rules and is easily taught within minutes. It truly is a classic game (it has been around since 1971) and will continue to entertain and challenge generations to come. I do, however, recognize that it isn’t for everyone. Abstract puzzle games can be a bit tedious at times, but I would argue no more so than Checkers, Chess, or Go. It all depends on the player’s disposition and interests. As I love a good challenge, I greatly enjoy this game.