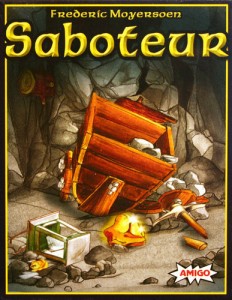 Saboteur, designed by Frederic Moyersoen and published in 2004, sees players take on the role of dwarves mining for gold (got to love those stereotypes!). Except that some of the players might really be saboteurs, trying to prevent the other players from reaching the gold. These roles, digger and saboteur, are allocated secretly by dealing role cards to players at the beginning of each of three rounds.

In each round, play revolves around playing path cards to bridge the empty space between the starting card and three face-down goal cards (two dummies and one marking the location of the real treasure). The main deck of cards is made up of 44 path cards and 27 action cards. Each player is dealt a hand of 4-6 cards (depending on the number of players). Players take turns in clockwise order to:

Path cards must be played adjacent to the start card or another previously played path card, so that any paths that extend to the edge of one card are continued on the adjacent card. Action cards come in 4 flavors:

The round ends when a path to the real treasure has been dug, or when all players have run out of cards to play. Players who achieved their goal (as diggers or saboteurs) will take some gold nugget cards. After three rounds, the player with the most gold nuggets is the winner! 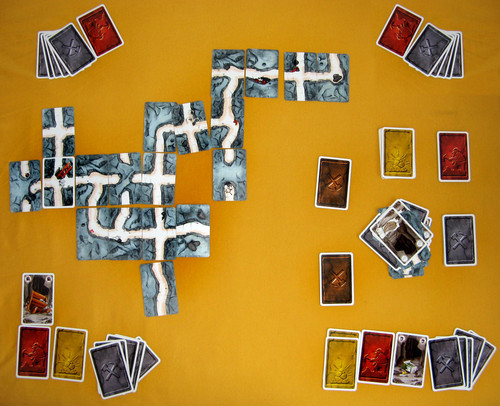 Example of a game in progress

This was (yet another) impulse purchase, the temptation of which I had managed to resist on several earlier occasions. I had, however, heard essentially positive things about this game as a light filler. After reading the rules, I thought that my 6 year old son would find this game very challenging, not only to keep his role hidden from other players, but also to work out the motives of his opponents. However, I also thought that this would be a good game to introduce to him simply because it is very different from other games he had played previously.

I tried this for the first time at the local gaming group, with 6 players, including my son and another boy age (I think) 9 years. One of the adults had played the game once before, and everyone else was new to the game. The flow of play was easily learned, such that we were familiar with the rules after one round of play.

In this game, the right path card in the right location can be a great benefit or a terrible obstacle. This makes the rockfall card (of which there are two in the deck) especially powerful and the game overall is prone to considerable luck. In theory, bluffing is an advantage; in practice, each round plays so fast that players cannot keep their intentions hidden for long, thus the game lacks the tension that builds in other “hidden traitor” games such as Shadows Over Camelot or Battlestar Galactica.

Although my son enjoyed playing, he did not really grasp the cooperative/competitive dimension of the game and therefore missed out on a large part of the experience. In particular, I did not witness any attempt to interpret his opponents’ choices or body language, and I admit that I would have been quite surprised if I had. He did not receive a saboteur card all game, but I am sure that it would have been interesting to see how he coped with playing a saboteur. My distinct impression is that while the rules can be mastered by a 5 year old child, the spirit of the game is better appreciated by more mature children, and perhaps even little geeks as old as 8 years old might be slightly too young.

Finally, this does seem to be a game that is better with a larger number of players (5 or more), although quick play is essential to ensure that the game does not “overstay its welcome”. I would be happy to try this again, but it is not at the top of my list of games to play next.