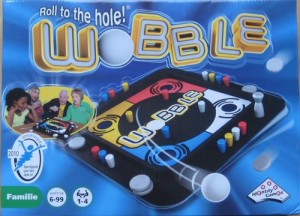 Wobble is a recent publication (from 2010) by Winning Moves. The components and rules are very simple indeed. The game contains:

The first player to complete his sequence wins the game.

If I ever had low expectations for a game, this was it. I found it at a local game store, significantly discounted (at $30), and I purchased it as a reward to my children for behaving especially well that day (okay, perhaps it was a bribe to encourage them to behave themselves).

After reading the rules, I had two concerns: firstly, that the manufacturing quality would be lousy, with a tendency for the platform to teeter to one corner; secondly, that stalemate situations would be common, with players seesawing between opposite quadrants.

On the other hand, the physical nature of the game seemed sure to appeal to children, no matter how flawed it might be. Moreover, the name of the game rhymes with one of my least favorite titles, Trouble, so I knew my children would love it!

I have to admit that I misjudged this game completely.

Despite my fears, the platform is well balanced. The game is playable by preschoolers (my 4 year old daughter had no difficulty with it), yet enjoyable for adults. Although I am not usually a fan of dice in games, the die here makes prolonged stalemates unlikely, even in 2-player games: eventually one player will roll low and the other will roll high.

The only real criticism I can make is that the board will not fit back into the box after assembly (the manufacturer warns that disassembly is likely to cause damage) and it is an awkward shape to store in a shelf.

From the overview, you may have thought, as I did, that this is a static and delicate exercise, with players adding or removing single discs carefully, waiting for the system to reach equilibrium before making the next move. Quite the opposite is encouraged, in fact, and I agree that the more successful approach is to add or remove multiple discs and to do so while the platform is still wobbling. The teetering of the platform creates suspense, with everyone excited to watch whether the ball will drop into the hole (it falls just short of being a spectator sport).

Luck plays a big part, but as we have seen with other games reviewed here at Father Geek, that is often a strength rather than a shortcoming. Although there is no chance of analysis paralysis (a.k.a. vapor lock), the games we have played so far have run slightly longer than I think is ideal. Nevertheless, this is a good choice for 4 players and one I expect to get much more mileage out of in the coming months. 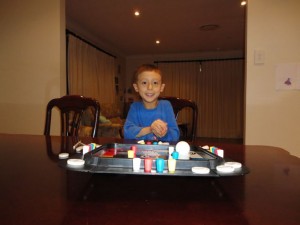