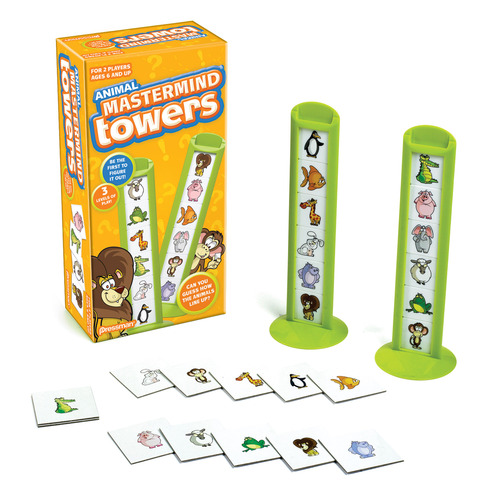 Animal Mastermind Towers is a child-friendly version of the classic logical deduction game, Mastermind, but with much easier rules and game play that allows for two people to play simultaneously as the puzzle creator and the puzzle solver.

The game is comprised of two plastic “towers”, 12 plastic tiles, and 12 thick cardboard solution cards. Both the tiles and the cards have matching illustrated cartoon animals. All the components are very durable and of high quality.

Game set up involves both players being at the table and actively participating. One at a time, each player will take a tile and the other player will take a matching solution card. This is is done until both players have a set of 4, 5, or 6 tiles and cards. The number of tiles and cards selected increases or decreases the game difficulty and the game length. It is highly recommended that you start with the easiest game when playing with little geeks. The easiest game is a set of 4 tiles and cards per player. Once your little geek begins to understand the logical and critical decisions that need to be made in the game and the deductive reasoning, you can increase the difficulty by adding another tile and solution set.

The last portion of game set up requires each player to take their selected tiles and secretly place them in any order in their tower. The tiles slide easily into a small groove located at the top of each tower and drop down into their final position. Once each player has completed their tower, the game is ready to play. Decide who should go first and begin.

On a player’s turn, they must ask a single “yes” or “no” question about the order of two animals. Specifically, “above” or “below”. The player already knows what animals their opponent has in their tower, thanks to the solution cards selected during the game set up process, and must carefully think of a question that will provide them with the most information. An example question could be, “Is the elephant above the rabbit?” Depending on the answer, the player then selects the two solution cards that match the animals they stated in their question and arranges them accordingly. In the case of the example, if the answer was “no”, the rabbit would be above the elephant, but if the answer was “yes”, the elephant is placed above the rabbit. Regardless of the answer, the solution cards are always played out in front of the player and are visible to their opponent.

The second and subsequent questions get a little more difficult only in the sense that there is more to remember. A player’s question should always help them determine the proper order of their opponent’s animals without asking questions that would results in redundant information. This will be a bit tricky for your little geeks to grasp at first, especially if they have all their solution cards out in play. In order to help facilitate the basic principals of the game, it is suggested that you gently correct your little geek if they ask a question they already know the answer to so that you might help them understand the game play better.

If a player has determined that they know the animal order in their opponent’s tower, they can declare they have the solution and state the animal order, from top to bottom. There are three possible outcomes:

This game is either going to be loved or hated by my oldest little geek (age 6). I can see no middle ground on this. His emotional intelligence and coping skills quickly start to diminish when he becomes stressed or if he feels like he is loosing. This game will test his overall emotional stamina, as well as his logical and critical thinking and memorization skills, either to a breaking point of no return or will encourage him to go further and continue the game. In short, this game’s endorsement with my little geek will be won through mini victories all based on questions. Nail biting, eh?

After I explained the rules to my son, gave several examples of how to phrase the questions, and provided suggestions on how to organize the information he knew with the solution cards, I asked him his thoughts on the game from what he was just told.

“The game sounds hard, but I like how all the animals look angry. Like they are upset we woke them up at the zoo.”

And we are off! Angry looking animals and all! Cross your fingers and buckle up, folks. This could be an emotionally bumpy ride.

Let me get right to it and state that my little geek loved this game. I was incredibly surprised and exceedingly proud by how he handled himself when it was his turn. His first couple of questions were redundant and this was to be expected. We briefly paused the game and I would explain why the questions would not lead to new information and we’d talk about better questions. After only a few times of pausing the game, he was flying solo like a pro. We played four times and out of the four, he correctly guessed my tower twice before I had a chance to guess his.

When the questions he asked were answered with a “no”, he would look putout, but I would remind him that a properly thought out question provides good information, regardless if the answer is “yes” or “no”. It took him an entire game to understand this concept And, in truth, it is a hard one to grasp. I believe we are conditioned, to a point, to accept “yes” as positive and “no” as negative. Therefore, a “no” response to a question is by default received as negative to the listener. This is unfortunate and Animal Mastermind Towers provides the parent, guardian, or educator a wonderful opportunity to squash this assumption.

Taken as a whole, this is a deceptively simple game that brings the classic game, Mastermind, to the family gaming table in a way that is both understandable and playable with your little geeks. Not only is it fun to play, it provides you a great opportunity for some one-on-one time and to help your little geek flex their mental and emotional muscles. With easy set up and cleanup, you can expect to be able to play this game on a whim without the need to have your little geek wait too long to play. Best of all, the game box is small and allows for easy packing for trips and for playing in a vehicle or jet plane.