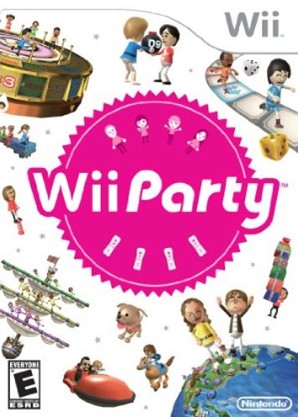 Wii Party isn’t that different from many other games available for the aging Wii platform. It’s a collection of mini-games that can be accessed individually or through special events that are hidden within the larger main games available to players. The format, in other words, isn’t exactly distinguished.

What sets this game apart is how much fun it is. Where other party-style games lost their charm in the first several minutes (I’m looking at you, Mario Party 8), Wii Party just seems to get it right.

The life blood of any game like this is the mini-games, and Wii Party has them in spades. The variety is staggering and, for the most part, they are skill-based, but with enough pure random guessing games to keep the playing field somewhat level. In one game, one player, the “Hider”, has to physically hide the Wii remotes in the room while the other players, the “Hunters”, close their eyes. Then the Hunters have 2 minutes to find the remotes, while the game uses the remote speakers to make little animal sounds that, if you listen carefully, will give the location away. In another game, players have to shout out a word that matches a specific category and pass the Wii remote around hot-potato style.

Most of the games are about controlling your little Mii’s (the Wii Nintendo avatars) as they perform all kinds of crazy stunts. The controls are easy to grasp for the most part, and the games are forgiving in their implementations. In my family, most of the games end up having a close finish, which is an accomplishment of game design, considering our wide range of skill sets.

The main games are well-made, too. There are several to choose from and they come in a variety of time-lengths, from around 10 minutes to a full hour. This flexibility is great for parents who want to get some family time in with their kids before bedtime. Also, these larger games have a greater amount of randomness in them, so players who tend to lose at the mini-games never get too far behind. For example, my youngest, age 4, won the 45-minute roll-and-move game last night, despite my early lead. She was quite pleased with herself.

I should note that this isn’t a gamer’s game. It wasn’t intended to be. So while I wouldn’t pull it out on a game night with the guys, I won’t grade it on that scale, either.

This is one of the few Wii games my whole family enjoys. The variety of mini-games and the mercifulness of the main games were intentionally and successfully designed with families in mind. That, and the fact that I am now nursing a black eye thanks to an overly excited 7-year old grabbing for the Wii remote that was making the correct animal sound, makes me think that we’ll be playing this one for a long time to come.

My only gripe is that the main games require four players, and the system will create AI players to fill in any empty slots. This is almost universal for party-style games, but it’s still frustrating. Not all families have exactly 4 members, and sometimes we want to play without the computer.