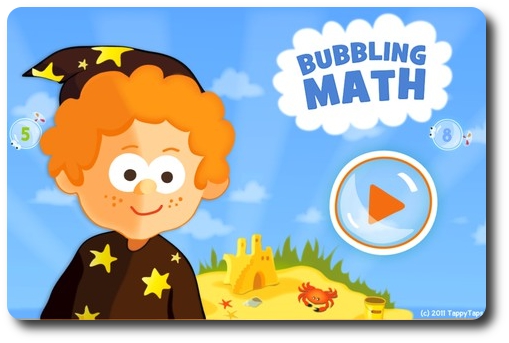 Bubbling Math (for iPad and Mac) is a video game targeted at children ages four and up. The premise of the game is straightforward: solve the math equation at the top of the screen by clicking on one of the three dancing bubbles below but only if it makes the equation above true. Choose the correct one and the smiling wizard boy at the top left of the screen will zap the silhouette trophy cup opposite of him, gradually revealing the entire cup to the player. Three cups need to be completed (bronze, silver and gold) before the player can advance to the next level.

Each cup contains nine equations to solve. There are nine total levels to be played in the game and each level is sequentially unlocked upon completing the prior level. The levels differ in the way the bubbles move about the screen as well as how the background looks. 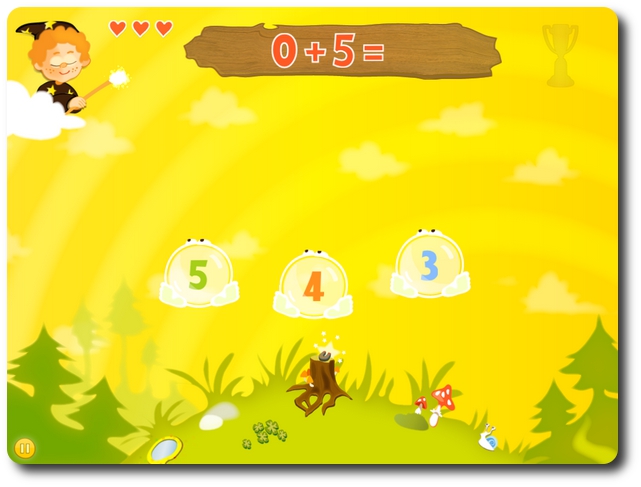 The player only has three “lives” available, with each life being represented by a heart located the top left of the screen. A heart is removed if the player gets an equation wrong. Only one heart is deducted per equation, so two incorrect choices on a particular equation does not remove two hearts; only one is removed instead. When the last heart is lost, the player starts the level over trying to earn the bronze cup.

When the end of the game is reached, your little geek can go back at it with an increased difficulty. The game has a granular configuration menu that allows the game to be tailored. This menu provides just the right amount of challenge for age and ability as needed. 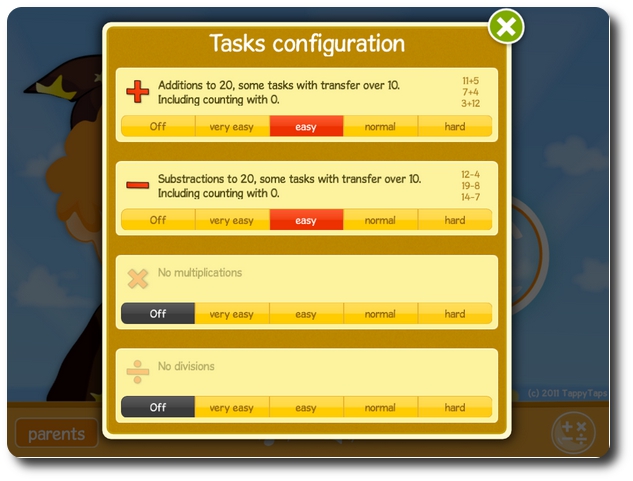 The game also allows the parent to audit their little geek’s progress and adjust the level of difficulty if required. The number of correct and incorrect answers, along with the corresponding levels are shown in the report. 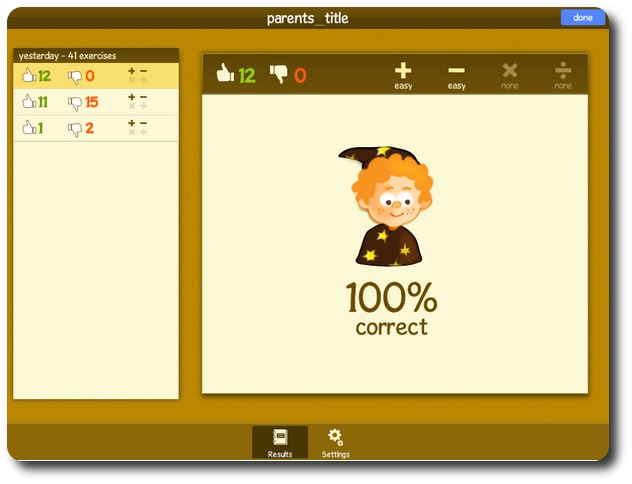 Both of my children have played many educational games online from various web sites. Due to the large amount of competition of fast paced games with well-known TV characters, I was very dubious about Bubbling Math doing well. My daughter is four and my son is seven.

My daughter was willing to give it a go, but is a bit too young. I think it will work well for her, but would be better if it had some popular TV characters included in the game that she could relate to and recognize.

My son on the other hand was a different story.  As expected, once he saw the dancing bubbles and the little wizard boy at the top, I got an immediate and loud “THAT LOOKS BORING!!!! I AM NOT PLAYING THAT GAME!!”

Not off to a great start.

I coaxed my son to complete at least one level in the game. He was happy when he completed a trophy and so I asked him if he wanted to continue. The answer  was a resounding “NO WAY!!!”. I think if the game included characters from Star Wars or Marvel Superheroes, he would have kept going. But for a seven year-old that is up on popular geek culture, the theme was too kiddish for him.

Bubbling Math should be perfect for my daughter, as I think she is the appropriate age for the theme. The auditing feature is nice to have and will be useful to monitor and tailor the challenge presented to her. If she is anything like my son, however, it won’t be long before the game theme becomes far too repetitive and the game itself passed over for something new.

Ultimately, the presentation of the game was a significant limitation for my oldest little geek. I think I can get my just-turning-five-in-one-month daughter to play it, but my seven year-old son, not a chance. There are far too many other shiny objects out there for him to latch on to. The game does provide a good level of challenge with room for growth skills, however, and should be a useful tool for parent geeks.

To learn more about the game, see the official web site for details.