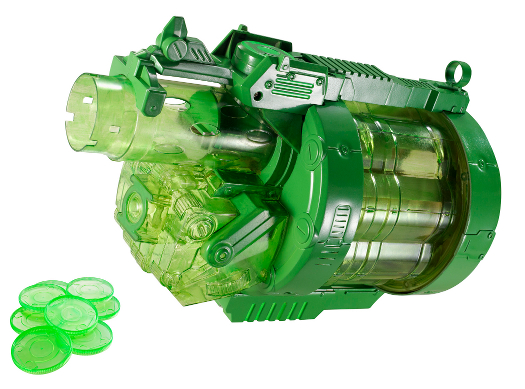 At Father Geek, we are not all about board, card, and dice games. True, we love games even to a point that some of us have dedicated areas of our homes put aside for the single purpose of storing and playing the games. But, our little geeks do not have nearly the level of passion we do (yet) and have interests of their own, as do we all. Where those interests intersect is pure magic and provides you an opportunity to engage your children on an entertaining and rewarding level. In my house, those intersecting points are games, toys, and comics.

I have an ever growing, but very modest, collection of comic books. My two oldest children, ages 6 and 3, have taken a very sincere and passionate interest in them. Not for the artwork but for the incredible stories they tell. More to the point, the universe in which these super heroes live and fight for justice is perhaps the most interesting aspect of the comics to my little geeks. And, admittedly, to myself.

And why not? The idea of there existing a world where good and evil fight epic battles is exciting enough to draw the interest of the young and old alike for generations. I was overjoyed when my little geeks started to take a shine to the stories, the characters, and the incredible powers that both super heroes and super villains wield on a daily basis.

When I was contacted by Dad Central Consulting and asked if I would be willing to review two toys based off of the comic book hero, Green Lantern, I jumped at the opportunity. It just so happened that not a week before I was reading about the Green Lantern to my little geeks, explaining the power ring, and how the Green Lantern was the equivalent of a police officer, but one who was responsible for the entire galaxy. The idea of a normal person being given power to protect the innocent, battle evil, and create really cool green things, was like candy to my kids. In short, they gobbled it up.

I told my two oldest little geeks that a “surprise” was going to arrive within a week. I never told them what the surprise was, only that they would like it. Meanwhile, I kept feeding Green Lantern tidbits to them. Some lore here, an epic story of a battle there. Always enough to keep them interested and wanting to know more. One could say I was teasing them with the details, but what I was really doing was maintaining their interest to make the day I received the Green Lantern toys all the more exciting!

When the box arrived, the boys were greatly excited. It had only been a week since I told them, but I was later told that it felt like “years” to my oldest son. I placed the box on the table, told my kids to get ready, and opened it with as much flourish and fanfare as possible! In other words,  quickly. 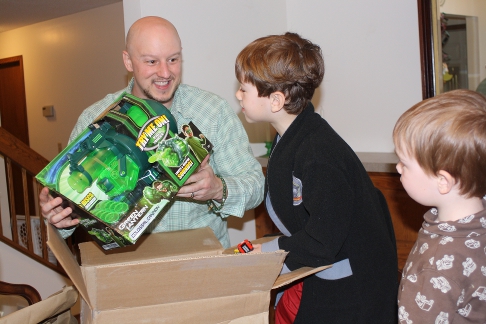 What was in the box and was it any good, you ask? Were the many painful minutes my little geeks had to endure waiting worthwhile? All hype and no substance? Let’s take a look. 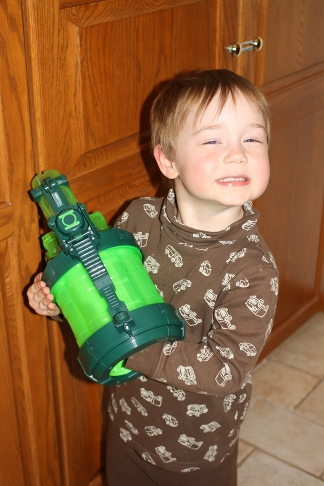 All smiles. Seconds later, he'd shoot me in the foot.

The first item I pulled out the box was the Green Lantern “Colossal Cannon”, which really is colossal, but not overly heavy. It is also very sturdy which means hours of rough and tumble play are possible. And thank goodness for that! My kids can play very aggressively and some of their toys do not last long whatsoever.

The toy gun itself fits over your little geek’s or your hand (because, let’s face it, the toy is cool) and forearm. Contained within is a hand grip and a large trigger you squeeze in the same way you would grasp a coffee cup. The spring behind the trigger provides just enough tension to make a satisfying “pop” when you pull it but not enough to make pulling the trigger a difficult task. This is especially important as the real magic happens when you pull that trigger like crazy.

The Colossal Cannon shoots little plastic discs that are loaded in the top front of the toy. Loading them can be a bit tricky at first, but my little geeks and I had no problem loading it up in seconds after a few tries. In fact, most of your time will be spent chasing down the discs because they fly far and fast (I can shoot the discs a good 25+ feet).

I would argue a bit too fast, honestly. At close range, the discs will hurt if they hit the face. As with any toy that has some sort of projectile, parents should take care to ensure they educate their little geeks on the “Do’s” and “Don’ts”. Safe play makes for fun play.

If you choose to remove the discs from the equation, you are not left with a hunk of plastic. The Colossal Cannon gives off an impressive light and sound show that boarders on very cool to very annoying. But, let us remember, the toy wasn’t designed for us adults who have long since stopped liking anything loud and repetitive.

Pull the trigger once and the plastic drum rotates which releases a single burst of green light and sound. Hold down the trigger and automatic fire kicks off, which does not shoot the discs in rapid succession, but does provide you and your little geek a whole lot of light and sound until the trigger is released.

Ultimately, if you don’t care for the sound, simply turn it off with a small switch, or as I often do, remove the batteries. Which, on a side not, I really don’t care for. The batteries required are the “button cell” variety. Three of them, in fact, which means you’ll be making a special run for more batteries if they die. I find this to be an unfortunate design choice as most children’s toys take AA or AAA batteries. 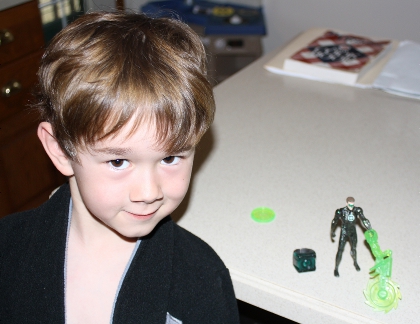 My son posed the toy and ring, and then posed himself! Look out Hollywood...

The second item revealed, much to the delight of my little geeks, was the Green Lantern action figure. No surprises here when it comes to toy itself. The toy, like the gun, is sturdy enough to take some punishing rough play. The toy itself is not at a collector’s quality level in the way of providing detail or points of articulation for display, but for kids, it is spot on.

Included with the toy is a somewhat translucent weapon that fits over the hand of the action figure, much in the very same way the Colossal Cannon does (Oh-ho! I see what you did there, toy designers) and is meant to represent the Green Lantern’s projection of the power ring. For those not familiar with the power ring (shame on you), it provides the wearer the ability to create anything they can imagine and is powered by their strength of will. Deep, eh? And you thought comics were just pretty pictures.

As an extra special bonus, the action figure comes with a replica of the Green Lantern’s power ring to wear! Super Hero bling!

Like all toys, you get out of it what you put into it and are meant to compliment the imagination and play. My two oldest little geeks are very big on the Green Lantern at the moment and the toys allow them to act out scenes I have described and shown them in the comic books. Watching them play with the toys, using different voices, and creating surprisingly in-depth scenarios with their toys is both fascinating and outrageously entertaining.

I can already tell that these toys are going to have a good long career in my household, too. The toy gun has been added to the main arsenal of selectable weaponry my oldest little geek favors when hunting bad guys around the house and the action figure has come up against and befriended the Power Rangers and Xevoz. From a toy’s perspective in my home, that’s about as good as it gets. Better yet, my little geeks are taking those toys, grabbing my hand, and leading me to the family room floor to play with them. Which I do and thoroughly enjoy.

Some unfortunate design choices are my only critical thoughts on one of the products. As an adult, you can easily fix or avoid the issues I noted by removing the batteries and the plastic discs from the start and reintroduce them when the situation warrants.

I wrote this review while participating in a blog tour by Dad Central Consulting on behalf of Mattel and received Green Lantern toys to facilitate my review and a gift code to thank me for taking the time to participate.