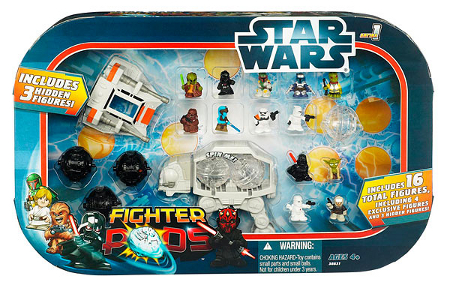 Star Wars Fighter Pods, spanning all six films and the animated Clone Wars, is comprised of sets of micro-sized miniatures and plastic “pods” that open to hold one miniature within. Also included in the sets are Star Wars vehicles that the “pods” snap into or float in. The miniatures are well sculpted and are locked in action poses. The plastic “pods” and vehicles are made of durable plastic and should last a long time.

As if playing with the little miniatures weren’t enough, you can recreate battle scenes in Star Wars or create your own scenarios in which the Empire and Rebels are fighting for the hearts and minds of the galaxy. Nothing terribly “new” here as that’s what little geeks do pretty much with any Star Wars toy. However, Star Wars Fighter Pods kicks it up a notch, or I should say “rolls” it up a notch.

Place a miniature in a “pod” and roll it into action! Any miniatures knocked down are out of the game! Or, place the “pod” in one of the vehicles and send it into battle by either rolling it, spinning it, or launching it into the fray! You can even combine the “pods” to create dual and triple attacks! The first series includes a wide variety of miniatures and would make any Star Wars fan smile with satisfaction.

Note that there are no “rules” to these action games, and rightly so. The “action game” is meant to be part of the creative play process. No rules means no limitations, which is exactly what a little geek needs when it comes to galactic battles between good vs. evil on the table top and on the floor.

My little geeks are BIG fans of Star Wars, thanks in large part of their father being an even BIGGER fan of Star Wars. Although, I must admit that I still feel somewhat disfranchised about Star Wars as a whole since the release of Episodes 1 through 3. One day, Lucas will be made to answer for his crimes for letting loose Jar-Jar on the world. One day…

But there is more to Star Wars then the movies (thank goodness). The animated series, Clones Wars, is some of the best animated television I’ve seen with engaging characters, outstanding dialog (for a cartoon), and family friendly. The many coloring books, books, books on CD, and let’s not forget the LEGO sets and action figures means there is something for everyone. You can even buy toy guns and light sabers. There is very little of the Star Wars universe that has not been boxed, shipped, and placed on a store shelf.

Because of the over saturation of Star Wars on the market, I am always surprised to see something new come out. I mean, really, how much more can we take? And just when I thought I had seen everything, out come the “pods”. Star Wars Fighter Pods is certainly “new” as a product and that is more than enough to get my little geeks excited, but not me. However when I showed my little geeks the toys, screams of excitement were emitted, many jumps up and down were executed, and one little geek even started clapping.

I let my little geeks look over the box and read the back to get an idea of what was included. Once they felt satisfied and ready to play (took all of 15 seconds by my watch), they told me it was time to “rip it open”. Before I did so, I asked them their thoughts.

I should note that my little geeks just recently watched the original Teenage Mutant Ninja Turtles, the live action movie. Thus the somewhat obscure late 80’s throwback terms they are using to express their joy.

Great movie, by the way.

The Star Wars Fighter Pods have found a new home in my house and are not only played with but fought over. Not overjoyed about the fighting, but with 16 miniatures and two vehicles to play with in one set, there’s more than enough for everyone. You just wouldn’t know it if you walked in and saw my two oldest bickering about who should get Darth Vader. Which is actually an argument worth having.

The rolling action portion of the toys have all but been set aside by my little geeks who prefer to play with them like they would with any other action figures. They set them up in bases on the carpet (which they pretend is Hoth), but very rarely put them on the table and roll the “pods” back and forth. Fine by me as I am not really big on my little geeks throwing anything in the house. And yes, I know the game is meant to be “rolled”, but if you put a little plastic ball in a little geeks hands and tell them to knock over their opponent’s figures, I can all but guarantee that little ball will be chucked overhand.

From a toy perspective, clearly they are a hit with the little geeks. From the Parent Geek perspective, I greatly appreciate the time and attention put into the miniatures and the wide variety of characters included. I just about jumped up and down myself when I saw the “Han in Carbonite” miniature, for example. Clearly, the individuals who are putting these sets together know what Star Wars geeks want and love. The “action game” portion is really nothing more than an re-imagined version of the classic game of Marbles where one player tosses a marble to knock over their opponent’s marbles. Or, in this case, tosses the “pod” to knock over Princess Padmé.

I’m strangely OK with that. 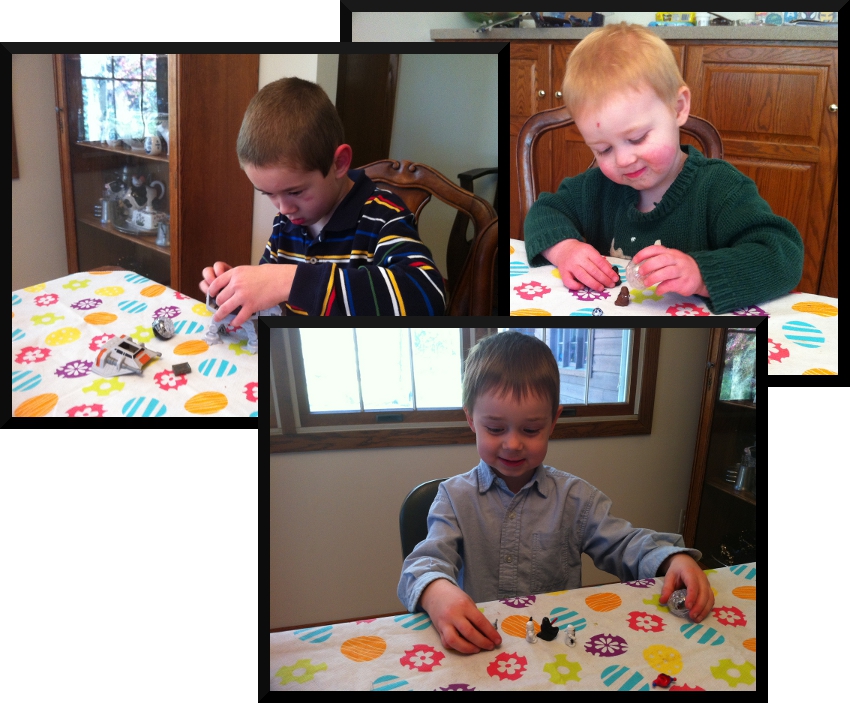 All three little geeks love the toys, and when they were done playing with them, I had a turn...

Parent Geeks, these are fun little mico-miniatures right out of the Star Wars universe. If you are a Star Wars fan, you’ll be enjoying the toy as much (if no more so, thanks to nostalgia) as the little geeks. I must warn you, however, that the miniatures are small. So small, in fact, that they are a huge choking hazard. As such, caution is needed if the toys are within easy reach of toddlers who are still looking to put anything and everything in their mouth. Luckily, my 2-year-old (soon to be 3) has outgrown his obsessive need to “taste” everything. I should also note that the game is intended to be “collectible”, which is just a fancy marketing way of saying “get you hooked and want to buy more and more”. There really is no need. The set I was sent had 18+ pieces. That’s more than enough for my 3 little geeks.

Child Geeks, these are small miniatures you can set up for epic battles between you and your friends or just you and your imagination. There are lots of miniatures to choose from, from Sith to Droid, from Starfighter Pilot to Jedi Knight. There are also vehicles such as the Snowspeeder and the dreaded AT-AT! Adding in the “action game” seems almost unnecessary when you consider the unlimited play you will get just by using a small handful of miniatures and your imagination.

I am pleased with the toy but I wouldn’t have thought to buy them myself. The small pieces do not suggest “fun” to me when I think of the large LEGO ships and big robots my little geeks usually play with. I was surprised how much they enjoy playing with a toy so small. I was even more surprised how I found myself at the kitchen table looking at each miniature over and over again with a smile long after my little geeks had gone to bed. There is just something “cool” about miniaturized toys. Make them Star Wars and you’ve got yourself a hit. But will they remain popular? I think not. In fact, I think this is going to be a fad and the market is going to push for consumers to be interested in it. Sure, they’ll sell, but I doubt we’ll be talking much about this toy two years from now. Of course, Mighty Beanz more or less throws my prediction in the trashcan, so you just never know. Regardless, if you are a Star Wars fan, you’ll be interested in at least taking a look at the toy. If  you buy it, you’ll have no problem recreating some fantastic geek memories from your past and creating new memories to share with your young Padawan.