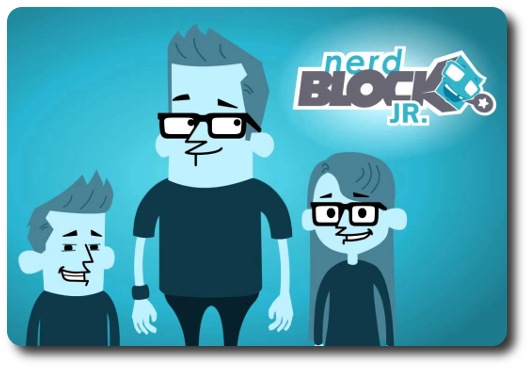 Nerd Block is a monthly subscription service that sends a block (it’s a box – marketing is being clever) full of goodies that are reportedly hand-picked by experts. Each monthly block is themed. Everything from comic book heroes to zombie hoards are covered. The offering we will be reviewing is Nerd Block Jr., a block specifically put together for the young gentleman Child Geek, ages 6 to 11. There is also a Nerd Block Jr. for the young ladies, ages 6 to 11. What can the Child Geeks expect to find in the block? Pop-culture goodies, geeky trinkets, and nerdy swag? Let’s find out! 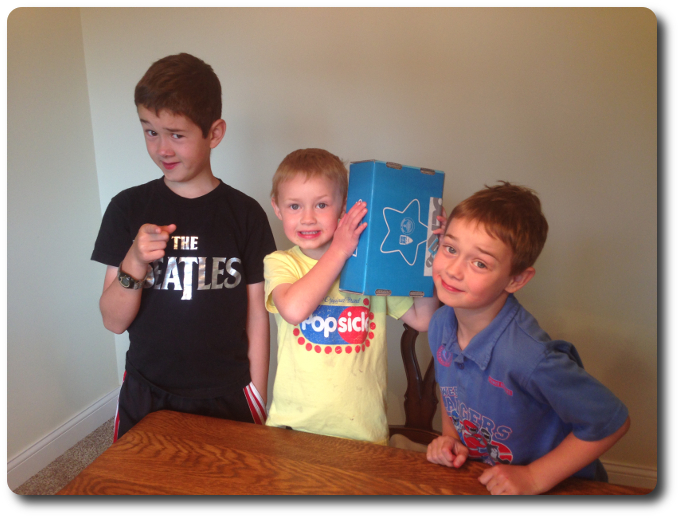 What’s In the Block?

The blocks for the Child Geeks do not follow any specific theme, while more adult themed Nerd Blocks do. Instead, each Nerd Block Jr. offers a small taste of unique toys, recognizable favorites, and new delights. Each of the toys in this month’s block was judged by our Child Geeks for its fun and interest value. Then the Parent Geeks had a turn, determining if the toy had any redeeming value from a parent’s point-of-view. In short, we put the block through the grinder. Here’s what we found. 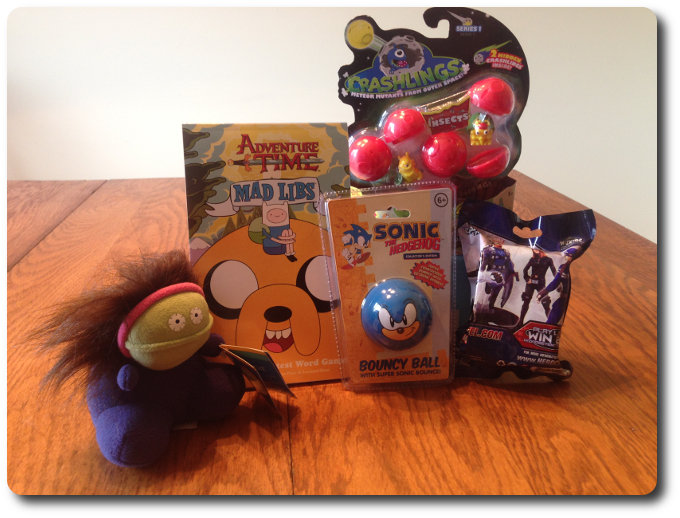 It’s blue and bounces. Enough said. The product’s label suggests it’s part of a collectors edition but fails to mention what that collection might be. Moot point, to be sure, since the real reason to have a super compressed bouncy ball is to bounce the bejesus out of it. And boy, ladies and gents, does it bounce. Even my 5-year-old could send that ball up in the air at a respectable height. For bouncy ball fanatics (if they exist), this is a fun little treat. Interestingly enough, my Child Geeks didn’t care one bit that the bouncy ball had the face of Sonic the Hedgehog. 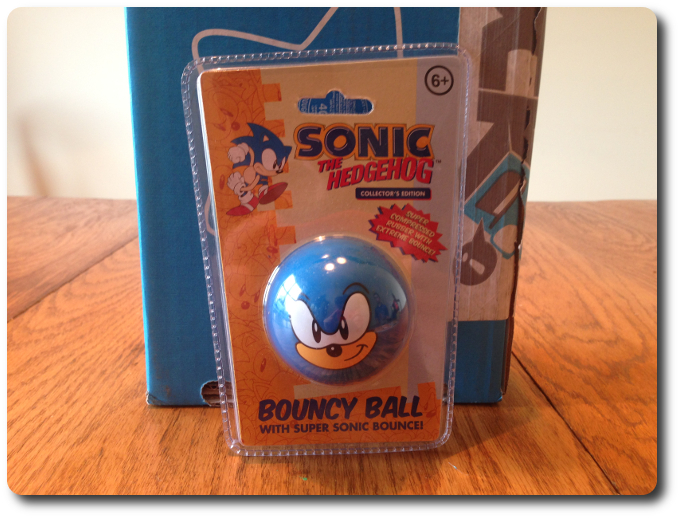 For the Parent Geeks, the most frequent comment was “NOT IN THE HOUSE!”. As one Parent Geek put it, “I have no problems with bouncy balls, but this one is way too big and way to heavy for my floors. I want that thing outside.” Which, I suppose, is exactly what you’d expect any Parent Geek to say about a giant blue bouncy ball.

If’ you’ve never had the pleasure of sitting in the back seat of the family vehicle without air conditioning during a hot summer day as your family went from one side of the continent to another, then you simply haven’t lived. I also doubt you recognize the simplistic genius of Mad Libs that made those summer family vacations bearable for me. The concept is simple. Using a pen or pencil, the Child Geek fills in blank spaces to complete a short story. The spaces to be filled include hints for what should be added. For example, “Noun”, “Part of the Body”, and “Verb”. Brilliantly, the first page of the little booklet quickly reminds the reader some basic grammar rules. The booklet also includes rules for solitaire play, as well as playing with a friend.

The older Child Geeks enjoyed taking the pad to a comfy corner, writing in the missing words, and then reading their story out loud to an audience of giggling peers. According to one Child Geek, “I think it’s hilarious how you can make the stories so funny.” The Child Geeks quickly learned that a pencil was the way to go and had a good time re-writing their stories to a point where the subject matter became questionable and adults had to step in. 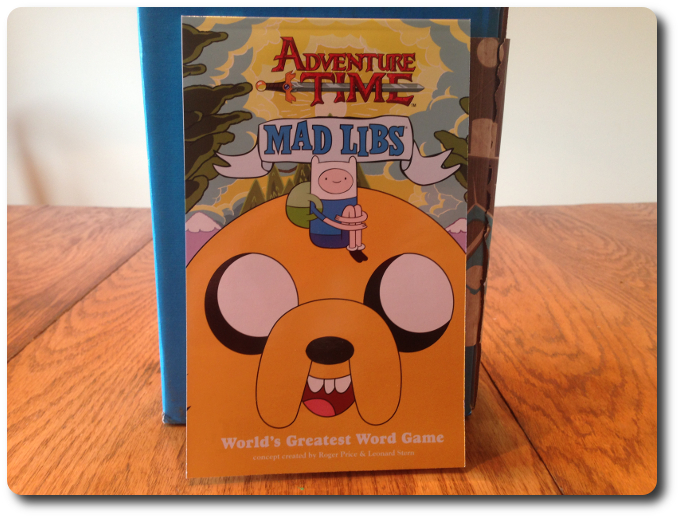 The Parent Geeks were very pleased with the Mad Libs. One Parent Geek said, “Now this I like. It teaches grammar, spelling, strengthens creativity, and best of all, I can use it with my oldest and youngest children.” Which is to say, a parent can sit down with a child who is not yet writing or reading and they can both fill out the story together. The Parent Geeks seem to enjoy the Mad Libs, despite the many fart and poop jokes it created.

Side note: The Child Geeks learned that “poop” and “fart” could be both a noun and a verb. Minds. Blown.

Tiny and purposely ugly, the Crashlings are small, rubber and plastic creatures that fit in slightly bigger rubber and plastic spheres (referred to as “Meteors”). The toy is meant to be played with as well as collected (collect all 150, folks), with individual Crashlings identified as Common, Rare, Ultra Rare, and Special Edition. The toy in the box includes not 1 but 4 Crashlings to help aspiring collectors get a jump on the competition. The toy also comes with instructions for 5 different games that can be played using the Crashlings, which are summarized here.

Overall, the Child Geeks didn’t care much for the games and the Crashlings didn’t keep their interest for very long. The rubber portion of the Meteor was the star of the show and the Child Geeks enjoyed making it pop as high as possible, but even the popping stopped being fun after a short amount of time. As one Child Geek put it, “It’s OK, I guess.” 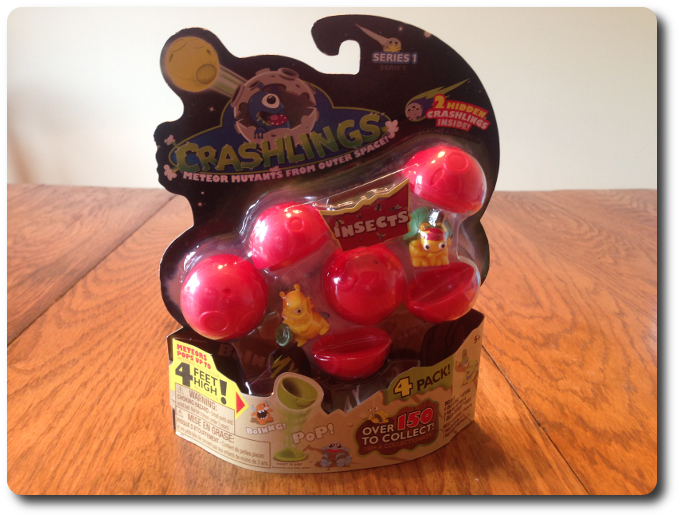 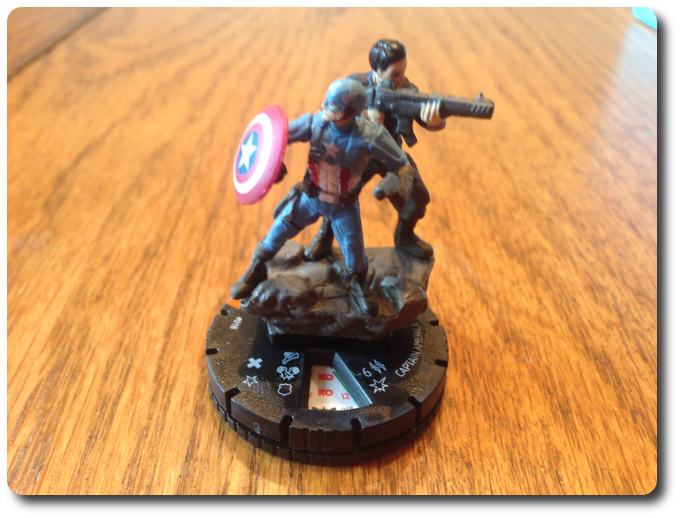 Some Parent Geeks didn’t know that the Heroclix was part of a larger game at first. One Parent Geek said, “I don’t understand. What is this dial for? Do kids just play with this? Not a very good toy.” A number of other Parent Geeks who were familiar with the game did recognize the figure and gushed over it. A few of the Parent Geeks even asked if they could have it. Hilarious. As one of these Parent Geeks said, “I think this is a great example of toy that can be introduced to any age and be a gateway into something bigger. May I have it?”

Maggie the Monster by Monster Factory

I’ll be honest. I have no idea what this toy is about and none of our Child Geeks did, either. A quick spin on the Interweb revealed that this stuffed toy is a monster who is hardwired to dance like a maniac. The look in the toy’s eyes clearly communicates that something is not right, confirming the “maniac” attribute. Maggie the Monster is either highly caffeinated or on some sort of illegal drug(s). Either way, the toy that is meant for Child Geeks as young as 3-years-old didn’t make any friends. All of our Child Geeks rejected Maggie, which might not have been a very smart move. Maggie does look, after all, crazy and goodness knows what she is capable of doing. 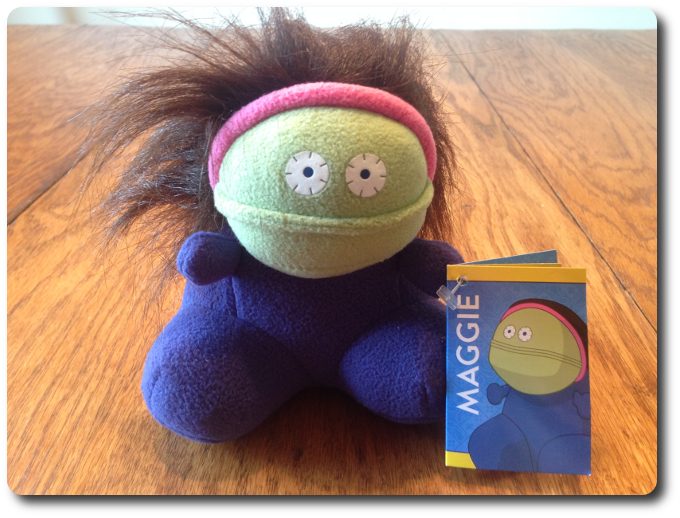 The Parent Geeks wanted the little plush toy to be put someplace where it could no longer be seen. Or it could be seen looking at the Parent Geeks. As one Parent Geek put it, “This is just creepy. Why is this a kids toy? It looks like a half-crazed junkie.” Another Parent Geek said, “Not sure what this is supposed to be, but it’s not really something I could see my kids wanting…or me tolerating.”

Overall, the Child Geeks enjoyed the toys in the block, but not to a point where anything but the Mad Libs and Heroclix made a strong and long-lasting impression. Everything else in the block, from bouncy ball to the world’s scariest stuffed monster toy for 3-year-olds, was forgotten and discarded. One Child Geek summed it up nicely saying, “The toys were interesting, and it was fun to see some new stuff, but I want to go outside and play now.” Not sure if he played with the bouncy ball or not.

The general consensus from the Parent Geeks was a big “meh”. According to one Parent Geek, “Admittedly, I’m not the target market here, but I just don’t see my kids being interested in any of this stuff.” Another Parent Geek said, “Maggie is horrific, the bouncy ball is trouble, and I see the Crashlings becoming passé in a day. The only items of real interest is the Heroclix and the Mad Libs. In my opinion, the Mad Libs is the best.” While the Parent Geeks were impressed and excited about the block concept, their first impression of what the block could offer wasn’t great. As one Parent Geek put it, “Neat idea, but no. This is not something I’d be interested to invest in. It’s just stuff that I don’t think will keep my kid’s attention or bring him joy.”

Overall, a lukewarm introduction to the Nerd Block Jr. line, but one block does not a true impression make. Each month is a virtual potpourri of geeky toys that span a wide range. Which makes total sense. It’s difficult to please individuals when you are serving the masses. This block didn’t hit the target, but next month’s might.

Based on the one block we were provided, the toys it contained, and the response from both our Child Geeks and Parent Geeks, I am hesitant to recommend Nerd Block Jr. for boys. It had an interesting assortment, but the contents failed to spark enough imagination, entertainment, and enjoyment to be of true interest. A swing and a miss for an otherwise solid offering? Perhaps, but only time and more blocks will tell. This block was for April. The block for May might be a home run.

For now, the toys that came in the block were of intense interest for a short time and now inhabit the corners, shelves, and back closets of my home, forgotten and discarded.

This product was given to Father Geek as a review copy. Father Geek was not paid, bribed, wined, dined, or threatened in vain hopes of influencing this review. Such is the statuesque and legendary integrity of Father Geek.