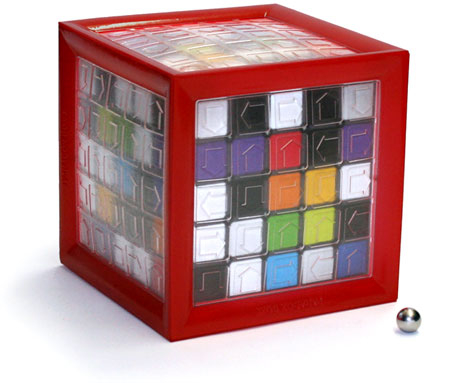 Some say that “Life” is a mystery and a puzzle to solve. Some say that you’ll never understand the opposite sex, as they are an enigma. I have even heard some state that the hardest riddle is the United States tax code. Regardless of what form the puzzle might take, there is no denying that the Human Mind loves a good puzzler. Perhaps it’s in our DNA to seek out difficulty and challenges to overcome. Or, maybe we are gluttons for punishment. Either way, this puzzle cube will intrigue and infuriate you.

Paradox Box, available from Fat Brain Toys, is a large cube puzzle that comes with 1 metal ball and no solution. Two of the six sides of the puzzle cube have a small hole in them. One hole is where the metal ball is inserted. This hole has plastic tabs on the inside that do not allow the metal ball to escape out of the same hole it is inserted into. The other hole, commonly referred to as the “impossible exit”, has no such tabs and the metal ball will fall out of it freely….IF the puzzle solver can ever get the metal ball to it.

Inside of the Paradox Box is a series of smaller cubes and chutes that the metal ball will travel in and through. Admittedly, this is something of an assumption on my part because the puzzle solver cannot see the inside of the puzzle cube and must guide the ball by instinct, intuition, and sound alone. This is done by tipping the cube in different directions and angles. On the outside faces of the cube are multiple colored smaller squares, a grid, arrows, mathematical symbols (plus, minus, divide, and multiply) and the occasional infinity symbol. All of this information might or might not be part of the puzzle and it’s left to the puzzle solver to determine if the colors, grid, arrows, and symbols have any meaning whatsoever. 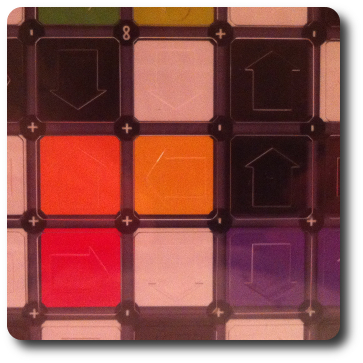 My little geeks and I love a good puzzler, but to a point. We like the challenge, but need access to the puzzle’s solution in the event we cannot figure it out. Paradox Box has no provided solution, and the puzzle solvers on the interweb are being very tight-lipped about this damnable cube. In fact, you’ll find a number of people who supposedly “solved” the Paradox Box, but no one will tell you how. This leads me to believe they are either full of it or there is some dark shadow government that is closely monitoring all communication regarding the Paradox Box solution and actively suppressing it.

Personally, I’m hoping for a  shadow government or some world-wide conspiracy because I cannot figure out this puzzle whatsoever. Knowing that there is a larger force at work to make the puzzle impossible to solve would make me feel a lot better about myself. I’ve tried solving it multiple times before I even planned to put the cube in front of my players so I could help them with the puzzle’s solution. Sadly, I’m the one who needs the help. This accursed puzzle makes me one part irritated beyond belief and one part hyper engaged in an attempt to unlock its dark secrets. Either way, I’m fully stumped.

But a puzzle without a known solution is a hard sell to any player. There’s no closure to be had after attempting every possible way to solve it. That pretty much stinks and leaves many feeling cheated. In the worst of cases, tricked or bullied.

Many think the “answer” to solving the Paradox Box is on the puzzle’s six faces and is being given away freely. If that is so, it’s a puzzle in a puzzle and a terribly frustrating one at that. I’m pretty certain that the “answer” is misleading, or at the very least, intentionally vague. It’s enough to drive a man to drink, fight, swear, and not necessarily in that order.

Teaching would-be puzzle solvers how to interact with the Paradox Box is as simple as saying, “Here, take this. It’s your problem now.” The person holding the cube will start to move it around out of instinct as their brain attempts to make some sort of sense of what they are observing. At which point, the person who is teaching the puzzle should mention in a clear voice (as they slowly back away from the cube) that “the goal is to get the metal ball out of the middle hole.”

And then they should run and never look back. Freedom is now theirs and the Paradox Box will forever haunt the new puzzle solver until they either figure out its mysteries or pass the buck (err…cube) to someone new.

When I gave it to my oldest little geek and briefly explained how to get the metal ball out, he only had one question of me before I ran for the door and sweet, sweet release from the cube’s burden.

And with that, I dropped a Ninja smoke bomb and beat feet to leave my little geek holding the Paradox Box, wondering why his dad was acting so strange and laughing like a maniac.

Paradox Box is and remains of little interest to the Child Geeks. They continue to tinker with it from time to time, but I think they do so because I promised all the kids in the neighborhood a dollar if they could get the metal ball out of the cube. So far and after weeks of on-again and off-again efforts by all the Child Geeks, the dollar bill remains pinned to my corkboard unclaimed. Without any method available to let them know if their twists, turns, shakes, and grunts of frustration are doing anything beneficial, the Child Geeks pickup the cube, give it their attention for a moment, and then come to the conclusion that they could be spending their time doing something more worthwhile. Paradox Box remains a mystery unsolved and unloved by the Child Geeks. 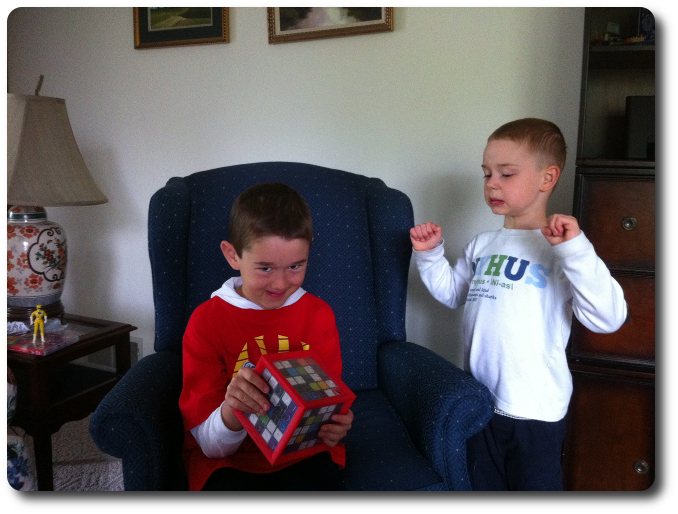 My oldest is convinced he is about to “solve” the puzzle to his younger brother’s visible frustration (also, Yellow Power Ranger)

The Parent Geeks also showed Paradox Box little love, but a bit more interest than their younger counterparts. A few of the Parent Geeks who fancied themselves “puzzle solvers” (read: did the weekly word jumble in the newspaper) were at first very excited to play with the cube, but quickly found that it was not an easy puzzle to solve. An abundance of time, it would appear, is necessary to solve this puzzle and that is one thing the Parent Geeks do not have. Even in those rare and quiet moments when the children are asleep, the dishes are put away, and the house is in a relatively stable state of chaos, there isn’t enough time to sit down and really focus in on the puzzle. And just like the Child Geeks, without any method of knowing if their efforts were leading to a solution, the entire activity felt like a pointless exercise. Still, there were a few Parent Geeks who wanted to keep at it. Eventually, they admitted defeat. They tipped their hat to the puzzle and thought it was an intriguing enigma to solve, but lacked the time (and patience) to attempt it. The Parent Geeks were mixed when it came time to endorsing the puzzle. According to one Parent Geek who I thought summed it up nicely, “Just because I can’t solve this puzzle in less than an hour doesn’t mean it’s a bad puzzle or not worth my time.”

The Gamer Geeks scoffed at the idea that the puzzle cube would best them and they eagerly waited for their turn to give it a try. A number of Gamer Geeks were able to get the metal ball out of the cube, but were unable to describe how they did it or repeat the feat a number of times in a row. This clearly showed they had not solved the puzzle, but were in fact just lucky. Amusingly, the Gamer Geeks had much less patience for the puzzle and walked away from it much faster than the Parent and Child Geeks. The Gamer Geeks voted to reject the puzzle not out of spite (supposedly) but out of principle. To quote one Gamer Geek, “I have no problem attempting to solve a difficult puzzle, but not including the solution with it is insane.”

I was lucky enough to put the Paradox Box in the hands of true Puzzle Geeks who I work with. These individuals are very intelligent and can be exceedingly anti-social at times. They find puzzles that they can work on alone to be very pleasant. Most of the time, I just have coffee with them as we sip our hot brew in awkward silence, but this time I was able to watch their minds work out the puzzle. After looking at the cube and passing it around, all three stated it was an exceedingly clever design. I sent the Paradox Box home with one of them over the weekend. On Monday, he showed me that he had solved it but refused to tell me how. In his own words, “I can’t tell you how I solved it because that would cheat you of the pleasure of discovering it yourself.” What a sicko. All three of the Puzzle Geeks fully approved of Paradox Box. Last I heard, they were all planning on buying a copy for themselves and possibly a few friends. I feel sorry for their friends.

Paradox Box is my new adversary. I find it ridiculous that I haven’t been able to figure out the solution yet. I consider myself a reasonably intelligent and capable guy, but GODS!!!!! THIS DAMNABLE PUZZLE!!!! Randomly working my way through slowly more and more aggressive and violent shakes of the cube that eventually result in the metal ball falling out is not “solving the puzzle”, unfortunately. I am not about to admit defeat yet, as I know there IS a solution and the path to the “impossible exit” is easy to traverse once you know how to navigate it. Still, I find myself toying with the fantasy of kicking it off a very tall building. And perhaps that is the real paradox. Despite the puzzle besting me at every turn, I keep coming back to it.

I love/hate you, Paradox Box.