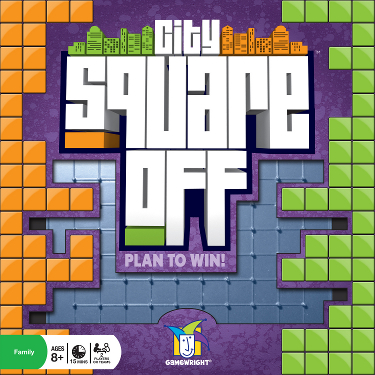 In City Square Off, two players (or 2 teams) compete to build the most space efficient city with as many tiles as possible.  Both players/teams have the exact same number of resources and equal amount of space to build. Cards are drawn that randomly reveal what tile must be placed next, but the players determine where best to place it. Careful planning is necessary or a tile will not be placed, ending the game in the process.

This game is comprised of two small game boards (one for each player or one for each team), 42 city tiles of different shapes (21 tiles per player/team), 21 cards that have an image of the tiles, and four city starter tiles. All the game components, except the cards, are made of sturdy plastic and are well designed. The cards are of typical thick card stock and durable. Once again, a quality product from Gamewright Games.

To set up the game, each player/team takes one of the game boards. The game board is separated by tiny squares that make up a grid. This grid is where the tiles will be placed. Each player/team selects one of the four starting city tiles. The starting city tiles must be placed in the center of the game board grid, and while they are different in shape, I have not found that any starting city provides a player with a serious advantage or disadvantage. On an interesting side note, the starting cities are surprisingly detailed and represent a medieval castle, a modern day city center, an Egyptian city, and what must be a Moon or Martian colony. A nice little “add” to the game that make it all the more visually interesting.

Once the players have selected their starting city and placed it in the center of their game board, each player/team selects one of the two available tile colors and arranges the tiles in front of them. This is not necessary but does help the players find the tiles they need and know what tiles they have left to place. Finally, the cards are shuffled and placed in the middle of the playing area or off to one side, face down. The game is now ready to play.

All game turns are played simultaneously and fast. Simply flip over one of the cards and reveal which tile needs to be placed. Each card represents one tile (21 in total). Each player/team finds the tile pictured on the card and places the tile on their game board grid to the best of their ability. The tiles must be placed so that at least one square side touches at least one square side of a tile already in play. This includes the city starting tile. Diagonal placement is not legal, but the tiles can be oriented in any direction and even flipped over as long as the tile entirely fits on the game board grid. Once placed and a new card drawn, tiles cannot be adjusted or replaced.

Play continues until one or both players/teams cannot place a tile. If only one of the players/teams cannot place a tile, the other player/team immediately wins. If both players/teams are unable to place the tile, the winner is determined by the player/team with the largest number of grouped open squares. Simply count the squares without tiles on them that are adjacent (not diagonal) to each other. If the count is a tie, each player/team counts their second largest and so on until a winner is declared and given the key to the city.

In City Sprint, the cards are removed from the game and each player/team attempts to place their tiles on the game board as fast as they can. The starting city tile is placed anywhere on the game board grid. The goal is to cover as much of the grid as possible using the same tile placement rules, however, game tile pieces (including the starting city tile) can be picked up and shifted around as needed after placement. The first player to completely cover their game board grid wins. This is a fun “puzzle race” variant.

In City Sprawl, the game is played as normal, but the tile placement rule that states the tile must fit on the grid completely is ignored. Only one square of the tile must be on the board at all times. The game ends when one player has either filled every square of their grid or can no longer place a tile. Count the number of squares in each tile that lie over the game board grid boundary. Whoever has the lower total wins.

My little geeks and geeky wife love Blokus in which tiles of the same shape and design are placed on a large game board grid. My little geeks not only love playing the game, but also just playing with the game. They make designs and “roads”, as one of my little geeks if fond of saying, on the game board grid. The same can be said with the Blokus 3D and Rumbis, which are blocks instead of tiles. They are just cool to play with.

When I saw City Square Off, I knew it was going to be a hit because it already shared many of the same elements and game play as the games they already enjoyed. What was different was the way the game was played. Blokus requires all players to compete for the same space, while City Square Off gives each player their own place to play. This means that each player has more control over how they build. As an extra bonus, this method of play reduces the level of player interaction but does not detract from player competition.

Once I opened the game, my little geeks gushed over the bits, especially the starting city tiles. They immediately started building with the game boards while I explained the rules. They were so taken by the fact that they both had their own game board to build with, I had to explain the rules three times to them. Not because the rules are difficult (actually, they are very straight forward), but because my little geeks just couldn’t be bothered to listen to their “old man” whilst building their epic metropolises.

After explaining the rules, thrice, I asked my little geeks what they thought of the game. Their response…

“I really like it! It reminds me of Blokus and I get to build my own city!” ~Liam, Age 6

“I want to be the space city! I am going to call my city Space Robot Fire City!” ~ Nyhus, Age 3

Winning words said with great enthusiasm! But will they enjoy it so much as a game? Let’s find out.

I am not a great fan of abstract strategy games. I find myself somewhat lukewarm if a game does not have at least some theme or narrative to hook my interest. Blokus is an excellent example of an abstract strategy game that I, for the most part, can live without. However, since my wife loves the game, I end up playing it a great deal. You’d think I’b be really good at it by now, but that is not the case. My wife takes an obscene amount of pleasure when she destroys me in Blokus. She all but dances a jig when she (always) wins.

City Square Off is not Blokus. Well, to be fair, it is very much like Blokus in regards to game mechanics and tile placement, but City Square Off feels very different. I believe this to be true for three reasons. First, each player has their own game board to build off of which means they have total control over what space they use. Second, game play is very fast with no down time for players and feels exciting as you quickly find and place the tile on your game board grid. Third, because the game is fast, it keeps the attention of my little geeks longer and engages them fully in the game experience. 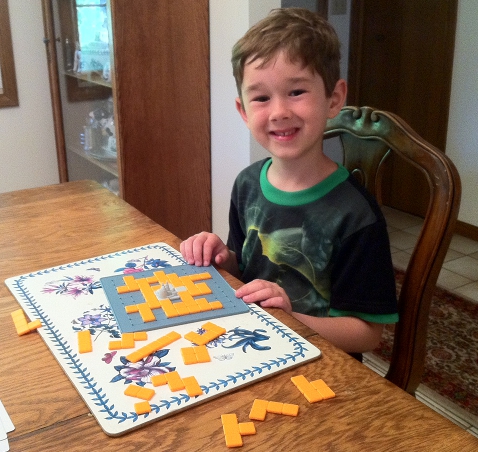 Team play is possible, but a bit awkward. It really doesn’t take anymore than 1 player per game board to make this game work and work well. Anyone else who is playing is really simply there to enjoy the ride and is the proverbial third wheel. As such, I really cannot recommend team play as I found it to be cumbersome to the overall game play itself. However, if you want to make City Square Off a 4 player game, simply buy another copy! Having two or more copies of the game does not reduce the game play style or game length by any means.

I greatly enjoy this game and highly recommend it for anyone who also enjoys Blokus and other tile placement abstract strategy games. The game is small enough to easily travel, sets up and breaks down in a minute, and can be played by a very wide age range. Fun, fast, challenging, and engaging, City Square Off is a great game for little and big geeks alike!