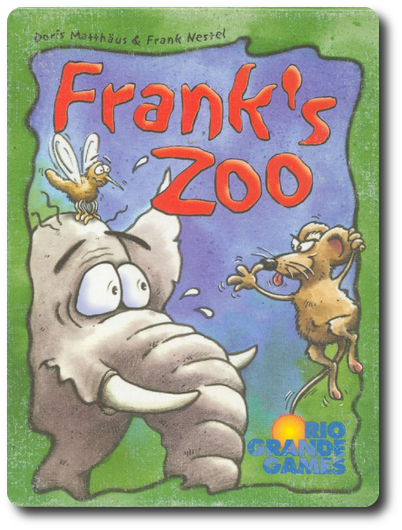 Frank’s Zoo is a ladder-climbing card game with a childish theme (each card represents an animal) but with an extra twist in that there is a not a simple, strictly transitive, hierarchy of cards. For example, a hedgehog outranks a mouse, a fox outranks a hedgehog, an elephant outranks a fox, but a mouse outranks an elephant. And although there are four animals that outrank a fox, the fox is the only animal that outranks the hedgehog.

There are 60 cards, including 12 types of animals and a Joker, which are shuffled and dealt out to the players at the beginning of each hand. The player to the left of the dealer leads off to the first trick, by playing one or more cards of a single animal type, constituting a set. Each subsequent player passes or plays a set of animals that outranks the last set played. An outranking set is either a same-sized set of an outranking animal or a larger-by-one set of the same animal. For example, one elephant is outranked either by one mouse or by two elephants. The Joker, not surprisingly, can be a wild card, and a mosquito can masquerade as an elephant, if played together with a “real” elephant.

If a set is passed by all other players, the trick is won and the trick-winner leads to a new trick. Players note the order in which they “go out”, i.e., play their last card. Points are scored according to the order in which players go out, and the first player to reach a target number (over several hands) is the winner.

A more advanced game (the official rules, I guess) involve a more complex scoring that depends on winning tricks with lions and/or hedgehogs, and also makes provision for partnerships, but the rules for card play are unchanged.

Having only seen this game played once (with the full rules), I realized that my children would enjoy this because of the theme. The card design shows which animals outrank which, making it easy to learn the game. I expected the game would still be a lot of fun if played more casually, but even so, I was pleasantly surprised to find that the basic rules were extremely suitable for children (or non-gamer adults).

Both my children (six year old son and four-and-a-half year old daughter) enjoyed Frank’s Zoo, even more than I expected. My daughter grasped the rules rather quickly; indeed, her only real difficulty with the game was with holding 15 cards at once. This is quite a common problem with card games, except of course those that do not require players to hold a hand of cards, like Bull in a China Shop and Duck, Duck, Bruce! Our solution was simple: I held my cards in one hand and her cards in the other, taking care to hold them so that only she could see them.

As far as I could tell, my children played cards whenever they could, so I doubt there was much strategy involved. This does not seem to matter much in the basic game. They had difficulty realizing that it was not always best to play one’s strongest cards first, but no doubt this concept will come with repeated plays. Remembering which cards have already been played is important, and certainly my children have the better of me on that score.

As in other family-friendly games, the enjoyment is not linked strongly to the competitive aspect (and indeed, thinking back to my first experience as a spectator, it was fascinating just trying to work out the complex animal hierarchy). Frank’s Zoo is a rare beast: a gamer’s game that is also a children’s game. Consider this a must-have for the family collection.