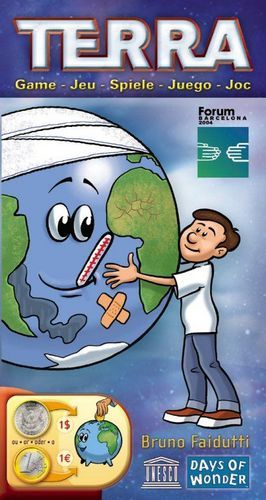 Terra, designed by Bruno Faidutti, published by Days of Wonder in 2003, is a semi-cooperative card game in which 3-6 players about solving the world’s crises.

The game revolves around solution cards numbered 1-6 in three different colors/suits (for military, economic and environmental problems/solutions) and crisis cards, numbered 10-16 in these same three suits. A crisis is solved when the total of solution cards played to it meets or exceeds its crisis number.

Players take turns in clockwise order. On his turn, a player draws the top card from the deck, adding it to his hand if it is a solution card, revealing it to the other players if it is a crisis card.

As soon as a crisis card is drawn, all players have a chance to solve it in its “impending” phase, before it becomes “active” (the official term used in the rules is “full-blown”). Each player has the option to play at most one solution card against an impending crisis. If this fails to solve the crisis, then those solution cards are lost and the crisis card is placed in the central playing area as an active crisis. Whether or not the impending crisis is solved, the active player draws another card, adding to his hand if it is a solution card and revealing it, etc., if it is a crisis card.

Once he has drawn a solution card, he has the opportunity to play solution cards against active crises (at most one card per turn per crisis). If a crisis is thus solved on his turn, he is credited with solving that crisis, regardless of any earlier contributions made by other players. As long as he plays at least one card against an active crisis, he is permitted to “hoard” secretly a set of three cards for end-of-game scoring (this also removes those cards from further play, so that they can not be used to solve crises).

During the game, points are scored if players solve crises. The reward for solving a crisis is larger and more predictable when solving a fully developed crisis, so that there is far less incentive to solve an impending crisis, unless the players are on the brink of losing the game. At the end of the game, assuming that the world survives, hoarded cards earn additional points equal to the values on the cards stored. While this provides an incentive to store high-value cards, this can seriously impair the players’ ability to solve crises and could cause everyone to lose.

The game ends immediately without a winner if too many unresolved fully developed crises accumulate. Otherwise, the game ends when the deck is exhausted.

I acquired this in a bundle of four games as a trade. It was not a title that had been on my wish-list, although Faidutti has a good reputation as a designer. I was mildly disappointed after reading the rules, as I was expecting something more thematic, rather than an abstract game with a pasted-on theme. This disappointment was offset, however, by the prospect of introducing a “semi-cooperative” game to my children, one in which balancing greed and generosity might be key to winning.

We have played this game 3 times so far. My children had little trouble getting into the swing of the game, and keeping track of the total value of solutions played against each crisis is a nice opportunity for them to apply their skills in arithmetic. Not surprisingly, we rarely resorted to solving crises in the impending stage: from the individual player’s perspective, it is a high-risk, low-reward proposition. As for active crises, we encountered a reluctance to progress towards solutions there too: players preferred to hold back and let their opponents lay the groundwork, allowing them to swoop in at the last minute and take all the glory. This, of course, meant that those earlier players preferred not to leave crises within striking distance of a solution. Perhaps this is why our real-world problems remain unsolved. The only way around this stand-off is to invest in a solution for the sole purpose of hoarding cards for end-of-game scoring.

The balance of the game seemed too favorable towards the players. Even when we were all playing selfishly, we never felt in danger of being overrun by the crises. The games failed to build that fabulous tension that is a feature of other cooperative titles such as Pandemic and Forbidden Island. I observed little dividend from unselfish play (which is to say that I always lost, and lost badly.) Perhaps the designer expected us to be even more cut-throat than we were. In any case, if I had hoped that this game would teach my children that being too selfish can work against you, then it was a foolish hope.

Although it was not what I expected, I ended up liking Terra for different reasons. It is a light game, readily accessible by pre-school and young school age children and their grandparents, another important factor to consider in family gaming. The emphasis on arithmetic is a bonus, a testament to the educational value of games that we love to mention here at Father Geek. Although the game is out of print and not rated highly by others – at least, it has a very modest rating on BoardGameGeek – I would recommend picking this up if you stumble across it in your local game store or thrift store. It is a game to be played with young children, though, not one to play with other adult gamers.

One Response to Terra Game Review