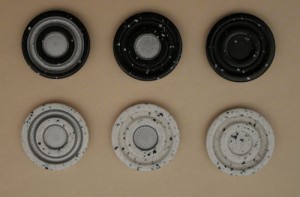 From left to right: Tzaar, Tzarra and Tott

TZAAR is a purely abstract game for 2 that belongs to the famous GIPF project.

Like Chess, TZAAR recapitulates that eternal struggle between White and Black. Each player begins the game with 30 disc-shaped pieces, including 6 Tzaars, 9 Tzarras and 15 Totts (although we call them targets, spots and blanks for obvious reasons). At the beginning of the game, these are placed randomly at the intersections of a hexagonal grid.

A capture involves moving one’s piece in one grid direction onto an opponent’s piece, thus replacing it. The capturing piece must be at least as strong (i.e., tall) as the captured piece. The move may pass over empty intersections, but cannot skip over another piece, friendly or otherwise.

A strengthening move involves moving one’s piece in one grid direction (skipping empty spaces if necessary) on to the top of another piece of the same color, thus creating a new, taller (i.e., stronger) piece. The identity of the piece (target, spot or blank) is defined by the topmost constituent disc. As mentioned a few sentences ago, such pieces are immune from capture by weaker (i.e., shorter) pieces.

A player always begins his turn with a capture. If he cannot do so, he loses the game!

White begins the game with a single-move turn. Every subsequent player turn has an optional second move, which could be another capture or a strengthening move.

If a player no longer possesses pieces of all 3 types, he loses the game.

This game was lent to me by a gamer friend, a fellow father geek (as opposed to a Father Geek), and he recommended it specifically for play with my six year old budding gamer son. Although I had heard many things about the GIPF project, I had never played a GIPF game before, so I had no idea what to expect. I remember playing Chess from Year 2 until the end of high school, and this represents essentially the entirety of my abstract gaming experience during this time. It was a game that I spent a lot of time playing and studying for competition, but I would stop short of saying that I truly enjoyed it. Furthermore, the ridiculous depth of Chess lends itself to huge disparity in skill levels between two opponents. GIPF games have a reputation for elegance: simplicity of design, with enough depth to keep things interesting, but not too much depth.

My friend’s credibility as a father geek remains intact. In fact, it was not just my son who enjoyed this game, indeed, my four-and-a-half year old daughter enjoyed it even more! In just one weekend, I lost count of the number of times she asked if she could play “Tizar”. This challenged my preconceived notions about the importance of theme for younger children. Heck, TZAAR did not just challenge them, it demanded they duel with pistols at dawn, then shot them in the eye while they slept.

Although it is a two-player game, my wife and I have enjoyed watching my two children play, and using the board position as an opportunity to discuss strategy with them. It has been fascinating to observe the evolution in their understanding of the game: from grasping the rules, to pursuing a rudimentary strategy, to developing the ability to think one or two turns ahead, initially with a little parental guidance and then without. After the children went to bed, my wife offered to play TZAAR with me, which is quite remarkable, as she does not enjoy games that much.

I have described just one weekend with this game, and although I am impressed, it remains to be seen whether my children will enjoy playing this game on a regular basis. Even so, I am confident that it is suitable for school aged children and non-gamer spouses. Its obvious strengths are that it is deep without being overly complex and has a short playing time. I am certainly looking forward to learning to play the other games in the series. 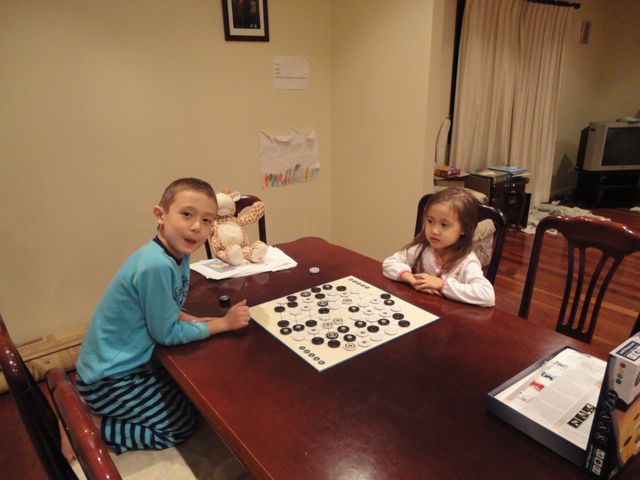 Don't be fooled by the serious expression, they're both having a blast