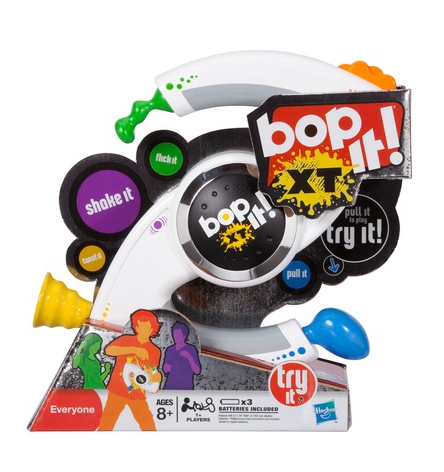 Speed and skill are just as important as listening and comprehension in this game of reflexes and patience. Players will need to listen and act quickly as simple commands are given to perform. Do it right and points are earned. Do it wrong and you get to start all over, much to the amusement of everyone else watching. 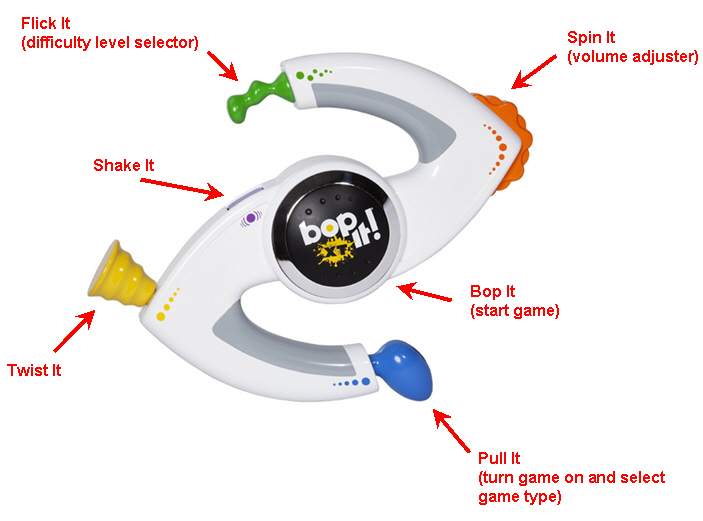 Suitable for one player or 2 or more players who want to take turns. The Solo game’s objective is to get the longest chain of correctly completed commands. The high score is kept and announced prior to every solo game.

Suitable for 2 or more players who need to be facing each other or within easy arms reach. The Pass It game’s objective is to be the last player “alive” by not messing up during a chain of called out commands. The last player left wins the game.

Suitable for 2 or more players who need to be facing each other or within easy arms reach. The Party game’s objective is just like the Pass It game, but the players are expected to use their whole body. When a body part is called out during a command, the player is expected to hit the “Bop It” button in the middle of the game with that body part. For example, if “head” is called, the player needs to headbutt the game. Awesome. Like the Pass It game, the last player left wins the game.

Suitable for 2 players, the One-On-One game uses the same concepts as the other games, but changes things up slightly by requiring each player to select a color, green or yellow. The players then both hold one side of the game with one hand. When the player’s color is called, they must take the correct action using their free hand. If a player fails to complete the action, the game ends. When the command calls for the “Bop It” button to be hit, the player’s hit the Bob It button that matches their color. The game will recognize which player hit the button first and then award that player one point. A player can win the game by being the first one to score 5 points or if the player’s opponent fails to correctly complete the correct action in the time allowed.

Worth mentioning is the reset button and the headphone jack. These are both located on the side of the device. The reset button will reset the game entirely, meaning all recorded scores will be lost. The headphone jack is a nice touch for those who want to play the game solo and are playing in an environment that is a bit too loud to hear the commands clearly.

To learn more about Bop It! XT, visit the product’s official site.

My little geeks have always enjoyed action/dexterity games even before we called them “action/dexterity games”. Their favorite game of this genre is “Run Around the House and Drive Mom and Dad Nuts”, which they have become exceedingly good at. But running around is not the only way to have an action-packed good time or keep my little geeks’ attention. Anything you put in front of my little geeks that blinks, blops, bloops, sparkles, flashes, or makes noise draws them in and keeps them engaged. Much like their hand-held video games and their Mom and Dad’s iPads they have somehow claimed as their own.

What we have here is a game that interacts with the player and those always tend to keep the players engaged and focused. Bop It! XT will not only engage my little geeks but also keep them on task. Fail to do what the game orders in the time given and a penalty is issued. In this regard, the Bop It! XT is very much like a parent.

The premise of the game is simple enough. Do what the game tells you by completing an action with one of the game device’s action points. Remembering what action point does what under a time pressure is where the challenge comes into play and the learning curve jumps. Focus is needed with as little distraction as possible. I can imagine no better game to put in front of my little geeks to keep them occupied while I make them lunch.

After I explained the game to my little geeks and demonstrated how everything worked, I asked them what they thought of the game so far.

One little geek is cocky and optimistic while the other is cautious, which pretty much sums up their personalities. Let’s see which one is right and how the game plays.

Games that require skill can be frustrating to a new player as they quickly learn they have the potential but not the ability. They must work to obtain the ability to play the game and this sometimes seems like a mountain to climb. Games that require skill and push the player with a time limit or greatly reduced margin of error can go from frustrating to terribly stressful. This is how the Bop It! XT plays and it takes no prisoners.

The little geeks, to put is bluntly, had their butts handed to them when they first played the game. They became exceedingly frustrated and put the game aside after only a few plays. Eventually, my 7-year-old came back to it and saw it as a personal challenge. This was especially true when I flaunted my “big score” of 12 points on the Solo game and challenged him to beat it. My 4-year-old never returned to it and I doubt he will anytime soon.

For adults, this game is just as frustrating and challenging as it is for the little geeks, but the adults have the advantage of having a better ability to focus and a truck load more patience. While playing the game, however, I couldn’t help but wonder why there were four levels of difficulty as Novice was challenging enough. This is especially true for the Solo game which I particularly enjoyed.

The One-On-One game was also very good and my oldest little geek and I have enjoyed it on several occasions. He particularly likes it when I lose and throw my fists up in the air, screaming “BOOOOOP IIIIIIIIT!!!” The Pass It and Party Game had mixed results. On a positive note, the game is fast and the players are always kept engaged. On a negative note, the game requires a great deal of focus and the volume is not all that loud. Playing it in an environment where focus is difficulty is like trying to drive a car with your eyes closed. Possible but it will only lead to a crash. If the game is not taken seriously, a good time will be had by all. 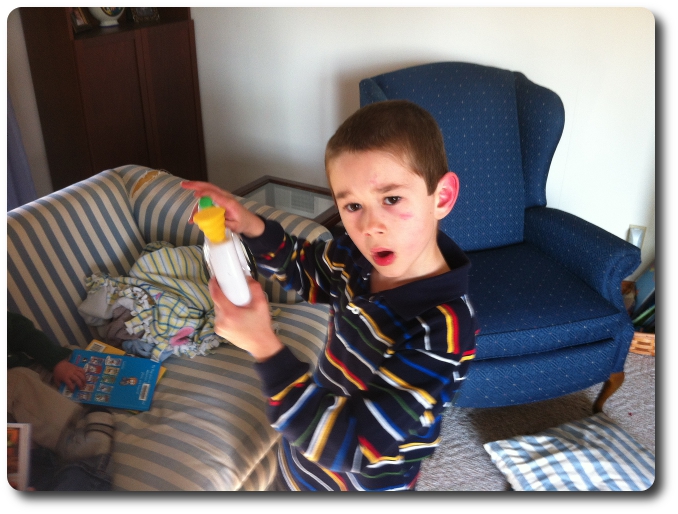 My oldest doing his best to play and be cool at the same time - seconds later, he lost the game, but was still cool

Gamer Geeks, this is going to challenge you and keep you on your toes. You go right ahead and poo-poo it and get all high and mighty stating “this is not a game, Cyrus, you fool!” I thought the same thing and scoffed at it. After I turned it on and have it spank me in front of my wife and kids, I had a newfound respect for the game. The game is challenging and really brought out the competitive nature in me. Put this game in front of like-minded individuals and you have yourself a wonderful game to play while waiting for your other Gamer Geek friends to arrive. If your group is feeling sleepy, put Bop It! XT on the table, issue some silly challenge that questions another gamer’s ability, and it’s on, baby!

Parent Geeks, this is a challenging and engaging game that requires the players to listen in and play attention. An excellent tool for strengthening color matching, memorization, dexterity, and emotional cooping skills. Yes, emotional cooping. Expect your little geeks and even some Parent Geeks to get put out, sulk, and maybe even swear. Just keep telling them (and you) it’s all in fun. Best of all, this is a game you can actually get better at by practicing. All it might take is a little push of encouragement from you to make your little geek (and your sulking adult friend) take another stab at the game and get better at it in the process.

Child Geeks, this is one of those games you will find frustrating at first but will become better at the more times you play it. The learning curve is moderate, but with practice and focus, the game quickly becomes an exercise you can work at again and again, improving each time you do so. The game is fast, which means you won’t have much time to wallow in your defeat. The game encourages you to keep playing and to keep getting better. Victory is yours but only if you keep at it.

I am pleased with Bop It! XT. To be honest, I never gave the game much thought when I saw it on the store shelves and didn’t give it much thought until I had it in hand and turned it on. I very quickly understood that the game was smarter than me and knew it, laughing at my inability to follow the simplest of commands. Of course, this would not stand and I took it as my personal mission to show the game who was the boss. After an hour, it was still the boss but I think we now had mutual respect for each other. My little geeks, Parent Geeks, and Gamer Geeks all appreciated the game differently. Some enjoyed it while some wondered why anyone would bother to invent such a thing. Such mixed emotions can be quickly tied to the player’s emotional state after playing the game. For those who liked the challenge, they gave Bop It! XT a satisfying (if not exhausted) nod of approval. For those who just were not in the mood or didn’t care to be made a fool of, Bop It! XT was given a very firm thumbs down.

In the end, it all comes to player preference. If you enjoy action/dexterity games where memorization and color matching are needed, I highly suggest you give Bop It! XT a try. If you are not that kind of person, feel free to dislike Bop It! XT as I am pretty sure the feeling is mutual. This game likes making you feel bad.