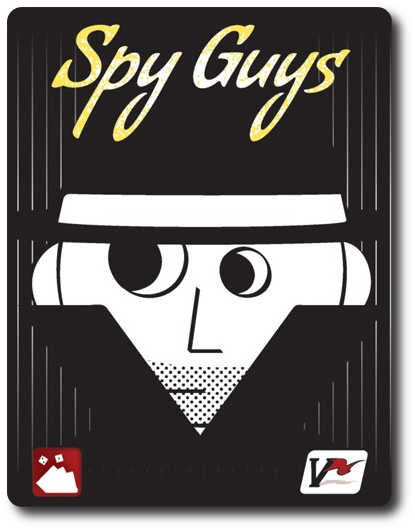 The infamous Edward Snowden said, “I’ve been a spy for almost all of my adult life – I don’t like being in the spotlight.” Which is to say, spies don’t like to be recognized or be watched. In this game, players will need to discover secrets and keep information hidden as best they can. The winner is the first to accomplish their mission, which will require memory skills and a penchant for hindering opponents. The trick is to stay underneath your opponents’ radar while remaining visible to all.

Spy Guys, designed by Tovarich Pizann and published by Victory Point Games, is comprised of 64 cards. The illustration by Michael Irizarry, Jr. are simple, not overly impressive, but do an OK job of representing the card’s subject matter.

Getting Ready to Spy 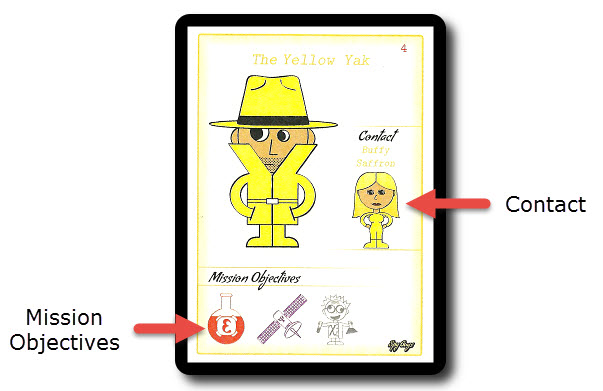 Third, find the 2 Escape Plan cards and place them with the Mission Objective and Contact cards set aside for the players’ Spy cards (not the ones that were removed from play). 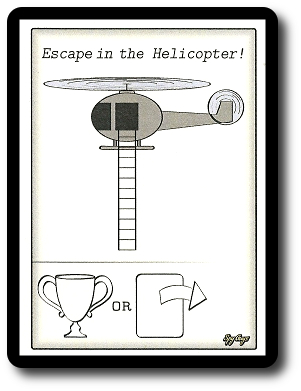 Sixth, shuffle the remaining cards and deal 4 to each player, face-down. This is the player’s starting hand.

Seventh, add to the deck the set aside Escape Plan, Mission Objective, and Contact cards. Shuffle all the cards together and then deal them face-down to the table to create a grid. The grid should have an equal number of cards per row and column as possible. The dealt cards should not overlap or be stacked in any way. Have each player place their Spy card face-up on the closest border of the grid. 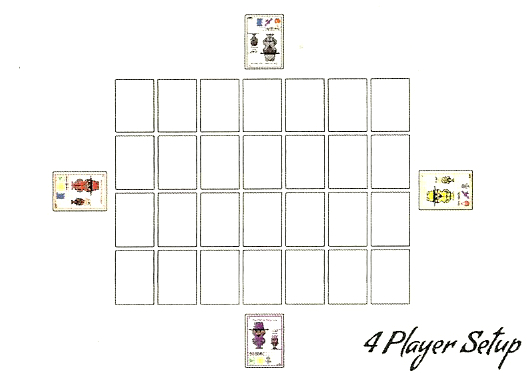 The Subtle Art of Espionage

Spy Guys is played in turns with no set number of turns per game. A player’s turn is summarized here. When playing, there are 3 universal rules that are always followed.

From the grid, the player must flip over 1 face-down down if possible. This can be any card the player likes. The revealed card is then taken into the player’s hand and resolved. This is where the player’s Symbol Decoder card comes in handy. Each of the card actions are summarized here. 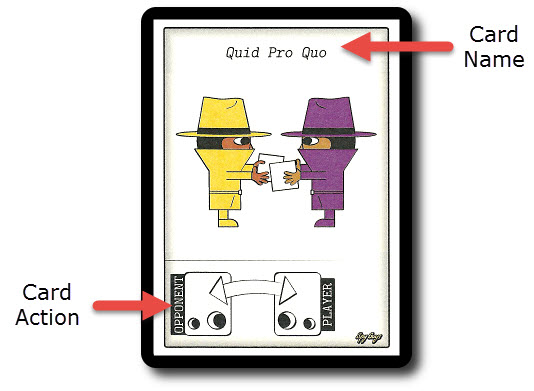 If the player elects to take a face-up card, the action associated with that card is NOT triggered. In all cases, the player’s total hand size cannot exceed 4 and if a card is taken into the player’s hand, the card taken from the grid must be replaced with another card which is placed face-down.

Once the player has revealed a card and resolved any actions, their turn is over. The next player in turn order sequence now goes.

The game continues until a player puts together their “winning hand”. Each Spy card lists a specific Contact and 3 Mission Objective cards. If the player gathers these 4 cards into their hand and uses the Escape Plan card in the grid on their turn, they win the game.

Two game variants are available for those who like to play the base game a bit differently. Each variant is summarized here.

This game variant shuffles in the Mission Objective and Contact cards into the deck before 4 cards are given each player to create their starting hand. This means a player could have 1 or more required cards for victory right from the start, the player’s opponents could have their cards, or the cards are located in the grid. This game variant gives the players more to consider and makes looking at an opponent’s hand all the more worthwhile.

If playing with 4 or 6 players, Spy Guys can be played in teams of 2. To win, a team must collect the required cards for both their Spies, but a teammate is out of the game as soon as they complete their Spy card’s requirements. At which point, the other teammate continues to play the game without a partner.

Teams sit opposite of each other. When a revealed card instructions the player to draw from the grid, the player can instead pass any card from their hand to their teammate who passes a card back, including the one just given. Teammates cannot communicate or hint at what cards they need. However, table talk is permissible, meaning sneaky teammates could speak to each other in code.

The Child Geeks really got into the game and quickly. Spy Guys is exceedingly simple to teach and the objective is very clear. So clear, in fact, that it’s  staring the players’ in the face right from the start. The difficult part is finding the right cards without letting your opponent’s know you have the cards you are looking for. This greatly pleased the Child Geeks and they all felt like the game’s theme and narrative was very much part of their enjoyment. One Child Geek said, “I feel like a spy traveling all over the world trying to complete my mission.” Another Child Geek said, “You have to be sneaky, remember information, and attempt to outsmart your opponents. That’s exactly what I think a spy would do every day at their office.” If spies had offices, sure. When all the games were over, the Child Geeks voted to approve the game. 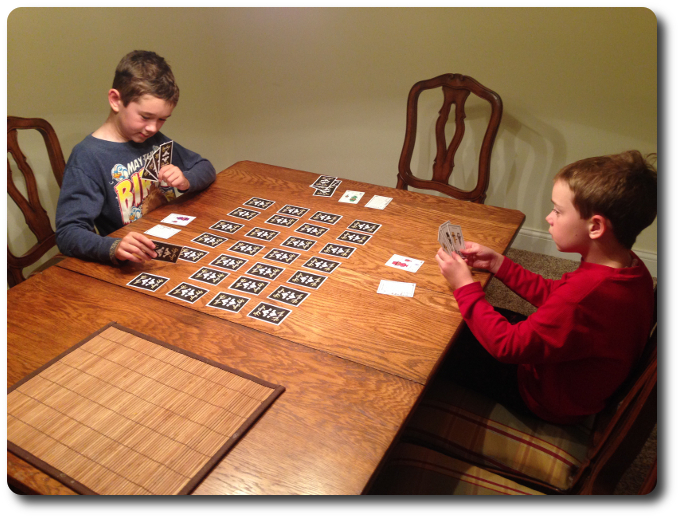 My oldest flips over his card while his brother looks on in hopes of learning something new, too

The Gamer Geeks liked what the game was doing and how it was going about it, but did not think it was a game worth their time. According to one Gamer Geek, “I think this is a great example of a game that introduces new players to different game ideas. Much like a gateway game. It’s easy to learn and challenging to play. Great for new players, but not a game I would ever be interested in.” All of the Gamer Geeks agreed. They found no fault with the game play or what the game was about, but didn’t feel like Spy Guys was a game they would ever enjoy. Another Gamer Geek said, “Neat idea, good execution, but ultimately not a game that engages my interest.” When the Gamer Geeks were done playing, they all agreed that Spy Guys was a game they would play if asked, but would never purposely bringing to their elitist gaming table.

To suggest that Spy Guys is just a “Memory game” is incorrect. Yes, certainly, memory plays a significant role in the game in order to obtain victory, but it’s not the single driving force in a player’s decision making process. A player must also consider how the other player’s are acting and what cards to keep, what cards to expose, and what cards to shift around. What the player remembers and what they think they know helps drive decisions, but how player’s interact drives the game play, too.

Even more interesting is that players are not in direct conflict with each other. While the objective for every player is the same, the necessary cards to claim victory are not. This means players will find themselves semi-cooperatively helping each other take another opponent down, but such alliances seldom last. Then there is the player interaction itself. Some actions are just meant to hinder, but most are meant to gather information. Just the like real world of spies and espionage, what you know can lead you astray or right where you want to go. More importantly, what your opponents think you know will get you in trouble. Staying under the radar is necessary in this game, but you have to keep everyone else well pegged so as not to get skunked.

I was most pleased with Spy Guys. It played quickly, had a lot more player interaction than I expected, kept me guessing, kept me wanting to learn more, and left me feeling very satisfied. The vast majority of our players enjoyed their time with the game, with the only negative points being frustration in getting cards and the lack of game depth for those who wanted a bit more. For everyone else, this casual game of deduction was a winner. Do sit down and play Spy Guys when you get a chance.