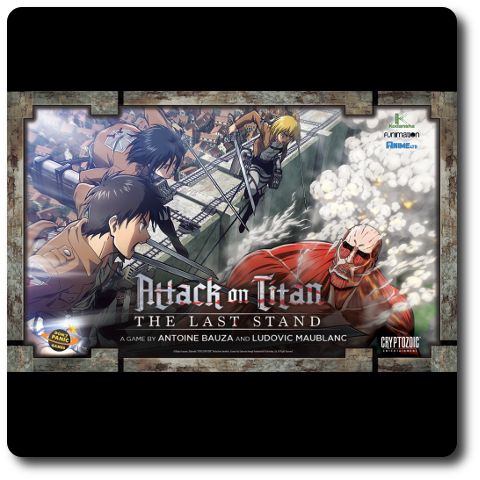 A titan has breached the walls of the city! It’s up to you and your small team to take it down before it devours the nearby citizens. You’ll need to risk it all and be prepared to sacrifice everything to complete your mission. Your enemy is a relentless eating machine. It only knows how to devour, but is far from stupid. Work together to take down the giant and save the day!

Attack on Titan: The Last Stand, designed by Antoine Bauza, Ludovic Maublanc, and published by Cryptozoic Entertainment, is comprised of 1 Titan standee, 8 Hero standees, 4 plastic Hero bases, 6 Platforms, 1 Tower, 1 Titan Health track, 1 Titan Health marker, 12 Citizen tokens, 6 Cannon pieces, 20 custom six-sided dice, 12 Heart tokens, 8 Hero cards, 4 Titan cards, 28 Action cards, and 7 Tactics cards. The game component quality is excellent. The cards are as thick and as durable as your standard playing card and the cardboard pieces are thick and durable, as well. Of particular note is the 15″ titan and the somewhat smaller 3D tower (fully armed with miniature cannons) that is the center piece of the game. Players will be launching their heroes from the tower to the titan, visually providing an entertaining element to this game about combating a flesh-eating giant.

To set up the game, first  assemble the Tower and place the 6 Cannon pieces on the Tower. The spaces where the cannons are placed are clearly marked with a cannon icon.

Second, assemble the Titan and attach the 6 platform pieces to it, creating something of a ladder that scales the Titan’s immense height.

Fourth, place the 12 Citizen tokens at the base of the Titan.

If You Are the Titan

If You Are the Hero

The players who take on the roles of the Heroes select one of possible eight and one of possible four colored bases. Each Hero has a unique Hero card. Once selected with a matching Hero standee, three Heart tokens are given to each player, which are placed on the Hero card. Each player should collect five custom dice that match the color of the player’s Hero’s standee base. Each player then places their Hero on one of the starting positions (at the foot of the Titan or on the Tower). All other Hero components listed here that are not selected should be returned to the game box. 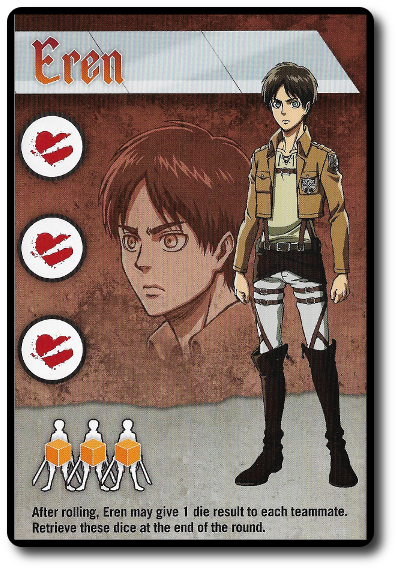 Now the game can begin!

Attack on Titan: The Last Stand is played in rounds, steps, and turns. A typical game round is summarized here.

Step One: The Titan Charges

The Titan player looks at their available Action cards and selects two, placing the selected Action cards down in front of them. The first Action card played should be face-up. The second is face-down. 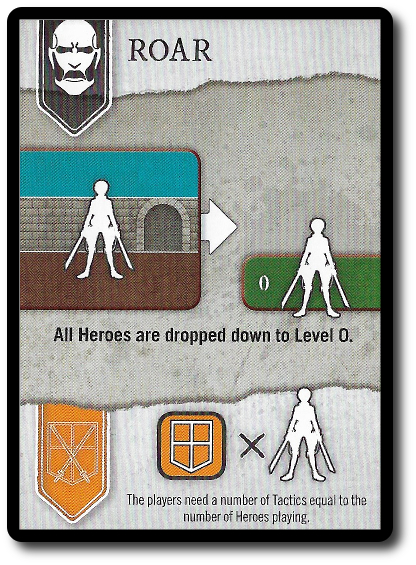 The Titan card shows a number of Titan symbols. If the Titan player has collected enough dice from the Hero players to “pay” for the ability on the Titan card, they can now use it. The same ability can be activated multiple times if they have collected enough dice to pay for each usage. Once the dice are used, they are returned to the owning Hero players. 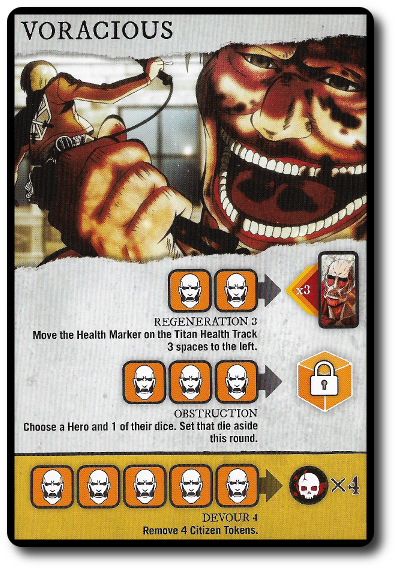 The Hero players can now roll the dice they were handed back. The previously rolled dice are not rolled at this time. They are considered “locked”. Only those dice returned to the Hero player by the Titan player are rolled. This is done in the same way as Step Two, except any dice rolled with the Titan symbol are “locked” and cannot be re-rolled. They are essentially useless this round.

Step Five: The Action is Resolved

All the Hero players now work to resolve the first (face-up) Action card. Table talk and team work is an absolute necessity here. After they resolved the first Action card, the second is revealed and resolved.

Step Six: The Heroes Mop Up

The Titan’s attack is now over and the Hero players have done their best to counter. Titans, due to their size, are slower than the faster (and much smaller) Hero players. The Hero players can now use any remaining dice not spent to attack the Titan directly. 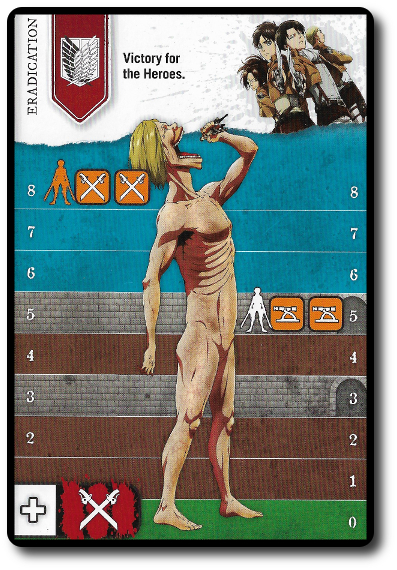 Step Seven: Get Ready for the Next Attack

After the Hero players have completed all their actions, the round comes to an end.

This completes the round. A new round now begins unless the victory conditions for the Hero players or the Titan player has been met.

The Titan player wins if they accomplish any of the following:

The Hero players win if they kill the Titan. This can be done by continued attacks or completing a Tactics card.

Attack on Titan: The Last Stand can be played with as few as two players. One player will take on the role of the Titan, while the other player will take on the role of two Heroes. When only playing with two Heroes (either because there is only one Hero player commanding two or there are two Hero players each commanding one Hero), the Tactics cards can be successfully triggered by only successfully completing two out of the three requirements with two exceptions. The “Neck Slash” and the “Eradication” Tactics cards still require the Titan’s health to be in a specific zone and have the Hero standees on a specific level.

To learn more about Attack on Titan: The Last Stand, visit the game’s web page.

The majority of Child Geeks, for good reason, had no idea what the Attack on Titan anime or manga series was all about. It is fairly graphic and not what I would consider “appropriate” for our younger Child Geeks. The good thing is, you don’t need to know anything about the story to enjoy the game. Yes, it helps with the context, but the game play is not hindered by lack of a deeper understanding of what is going on and why. According to one Child Geek, “I have no idea why this giant is eating people and I don’t care. It’s going down! Destroy the monster!” And one Child Geek who played as the Titan said, “All I know is that I win if I eat everyone. I’m cool with that.” The game requires team work and timing, organizing when certain dice should be used and not. Table talk is highly encouraged and the Child Geeks worked well together. The only player who ever felt a bit left out was the player who took on the role of the Titan. As one Child Geek put it, “It’s lonely being a monster.” All the Child Geeks voted to approve Attack on Titan: The Last Stand.

A few of the Parent Geeks were familiar – to some degree or another – with the Attack on Titan story, but did not feel that is was necessary to know anything about what was going on to enjoy the game. According to one Parent Geek, “In the end, it’s all about taking down the giant. Don’t need a backstory for that.” The Parent Geeks liked how the players worked together and how they could combine their attacks for epic take-downs. According to one Parent Geek who was familiar with the game’s backstory, “It is a perfect example of how a small group of people can tackle a big problem.” The only aspect of the game the Parent Geeks didn’t like were the giant naked people and the few pieces of artwork that show the giants eating screaming humans. Specifically, the 15″ giant that the player’s need to take down. When the last giant fell or had their full, the Parent Geeks voted to approve Attack on Titan: The Last Stand.

The Gamer Geeks were mixed. Some enjoyed the light strategy and tactics of the game, finding it to be a good filler. The other half found the game to be a dice fest, meaning that the game was just about rolling dice and not much else. According to one Gamer Geek who felt as such, “The game seems to give you a lot of choices, but everything is driven off paying for your actions with your dice. If you don’t have the right rolls, you are stuck. Worse yet, the game feels anticlimactic because of all the dice rolling.” This point-of-view was not shared by everyone. Another Gamer Geek who enjoyed the game said, “I like how you can work off each others dice, making the game feel very cooperative with a shared level of risk and reward. This is really a team game.” The end result was the Gamer Geeks giving Attack on Titan: The Last Stand a mixed endorsement.

I liked the game, finding it to be a good mix of strategy, tactics, and luck. The most boring aspect of the game is playing as the Titan. It just isn’t that interesting. The player is little more than a brain behind a seemingly mindless eating machine. This keeps things for the Hero players in a state of constant “known unknowns”, meaning that all the players can pretty much determine what will go down, but for the hidden Action and the roll of the dice. But it’s all manageable. The key to playing this game is knowing you are going to get beaten up, but that’s OK. The game is about taking risks, as in risking it all. Which is exciting! The Titan risks nothing, which is much less engaging.

Being familiar with the Attack on Titan anime, the game does a pretty good job of capturing the show’s thematic elements. Jumping off rooftops (towers, in this case), shooting the canons, and taking down Titans is all here. Players will bounce their Heroes up and down, across the tower to the shoulders of the giant and back to the ground, repeatedly. Position and timing is crucial for some take-downs, and moving just at the right time and being in the right spot feels a bit like a dance. Everything is in constant motion.

Overall, an enjoyable cooperative game that kept just about everyone entertained and also a bit frustrated. Nothing worse than being just one die value shy of an epic move! Which happens more than one would think and like. Do give this game a try, especially if you are a fan of the Attack on Titan series in whatever form. While the game is not a giant among its kind, it is big fun.