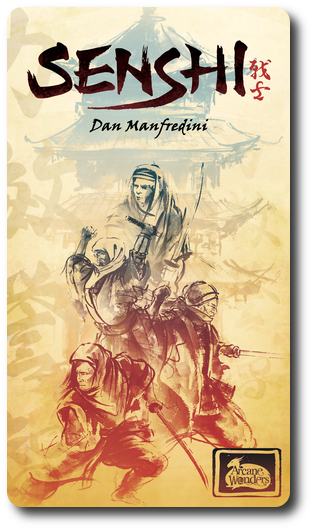 Master Kahn, a character in the TV show Kung Fu, said “In striving for an ideal, we do not seek rewards. Yet trust does sometimes bring with it a great reward, even greater than good.” In this game, all the players are competing to be the best, but by doing so, they also reward their peers through their efforts. There can be only one master of the temple, but if one is to master all, plyers must learn that a selfish path is the slow way to victory. It’s better to share the wisdom then to leave others in the dark. But only to a certain degree…

Senshi, designed by Dan Manfredini and published by Arcane Wonders, is comprised of 4 Training cards and 72 Attribute tiles (18 each in the colors of red, green, yellow, and blue). The component quality, while minimal in bulk, is excellent. The Training cards are slightly thicker and more durable than your standard playing card and the Attribute tiles are made of solid plastic.

To set up the game, give each player a Training card. While the pictures on them are different (representing the different students), there is no other difference in them.

Second, remove a number of tiles based on the number of players in the game. For example, in a three player game, three tiles of each color (12 tiles in total) are removed from play. The remaining tiles are placed in the center of the playing area, randomized, and then stacked into sets of three. Colors should not match, but they certainly can, since the building of the stacks is also at random. I suggest that all players contribute to this exercise and make it part of the game to see how fast they can cooperatively build the stacks. The number of stacks will be dependent on the number of players. For example, in a three player game, there will be 20 stacks comprised of three tiles each.

Third, determine who will be first player and have each player, in turn order sequence, take a stack and hold it in their hand. From this point on, any tiles a player has in their hand should be kept hidden from their opponents.

That’s it for game set up. Time to show the master of the temple your skills.

To Become a Master

Senshi is played in turns with no set number of turns per game. On a player’s turn, they must take one of the following actions.

If the player takes this action, they select one Attribute tile currently in their hand and add it to one of the four matching Scoring piles. Red for strength, green for agility, yellow for wisdom, and blue for honor. Tiles placed to the Scoring piles should be stacked by color and underneath the appropriate footer on the Training card.

After a player completes the Test action, all players (including the current player taking their turn), take all the colors that match the tile being trained from the tops of their own stacks (those found on their Training card) and place them on their own Scoring pile. 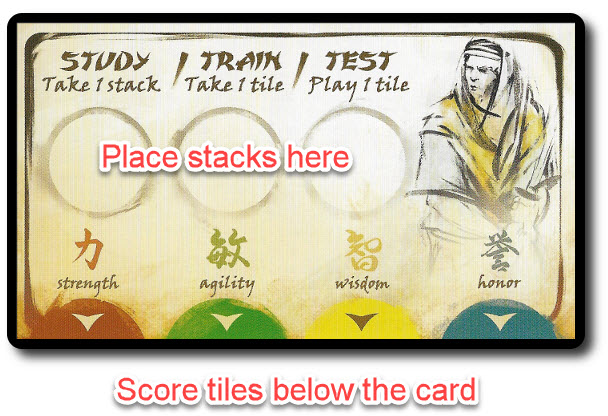 Once the player takes an action and completes it, the next player in turn order sequence now goes.

The Student Has Become the Teacher

The game continues as noted above until the last stack from the middle of the playing area is collected. This triggers the endgame. Each player now has one final turn, ending with the player who took the last stack when they take their final turn.

Players now count the number of Attribute tiles they have collected in their Scoring piles. The player who has the least number of Attribute tiles in any of their Scoring piles is immediately knocked out of the running. They can sit back and be grumpy if they like. If there is a tie, then those players are knocked out, as well, unless all the players have the same number. If such is the case, then none of the players are kicked from final scoring.

All players who are in the running to win now count the total number of Attribute tiles in their largest Scoring pile of any color. The player with the most wins. If there is a tie, it’s broken by how many Attribute tiles the players have in their hand, with victory going to the player who is holding the most.

With the standard game, players see what stacks their opponents are taking at the start of the game. Using this game variant, all players close their eyes and blindly draw three Attribute tiles from the middle of the playing area before they are put into stacks.

To learn more about Senshi, visit the game’s web page.

The Child Geeks had fun, shifting their Attribute tiles around, until they landed in their Scoring piles. They very quickly learned that timing was everything in the game. According to one Child Geek, “You need to watch what tile colors the other players have before you score yours. If you are not careful, you’ll help your opponents win!” Very true. But there is also a bit of risk here that must be accepted, per the observations of another Child Geek. According to this Child Geek, “Sometimes you have to let your opponents collect points, because you have a great opportunity to collect a lot of points yourself.” Again, very true. The Child Geeks played the game several times and each time they finished it they all agreed it was a good time, resulting in a full endorsement.

The Parent Geeks saw Senshi as a moving puzzle. According to one Parent Geek, “A really liked how you had to think on a multidimensional level, but also linear. You had to keep track of three different states of your tiles, but could only ever take one path on your turn. This forced me to think ahead.” Another Parent Geek said, “I really like how you are forced to accept the fact that when you score, your opponent might score, as well. I saw this as an opportunity to set myself up for scoring on my opponents’ turns. Not just mine.” This is a great comment, as it shines light on how the players have to think not only about their own turn, but also their opponents’. There is always an opportunity to score points, but the player has to prepare for the moment. When all the games were over, the Parent Geeks voted to approve Senshi.

The Gamer Geeks thought the game was interesting, fast, and clever, but not all of them thought the game was fun. According to one Gamer Geek, “The game was just OK. I found it to be repetitive and simple, but that didn’t make it easy. But just because I wasn’t able to win quickly didn’t make me feel the game was something I enjoyed.” Another Gamer Geek said, “Light and to the point, without being obvious about how to win. I liked it and would play it again as a filler. Takes very little space and can be played socially. Perfect for pub nights.” The Gamer Geeks agreed on most aspects of the game, except if the game itself was worthy of their elitist table. The end result was the Gamer Geeks giving Senshi a mixed endorsement, with roughly half enjoyed the game for what it was and the other half disliking it because it didn’t live up to their expectations.

Senshi is similar to a shell game. You are constantly moving Attribute tiles, staging them for the next possible action, and watching your opponents do the same. As the Child Geeks mentioned, timing plays a very big role in this game. When you collect your stacks should be timed in accordance to what you have in your hand. Taking stacks into your hand should be timed when you know points can be earned in the very near future that won’t score a lot of points for your opponents, but also is a good way to slow your opponent down. Scoring tiles must be timed so the maximum number of points can be earned by looking at what all the players have available to them. The end result, as one Parent Geek put it so elegantly, is a multidimensional puzzle with linear game play. The linear portion is how you collect and score (study to train to test). The multidimensional piece comes from knowing that there are several different ways to score, forcing the player to think on multiple levels.

I enjoyed the game and fell on the side of the Gamer Geeks who liked it (although my vote never counts towards the endorsements). I found Senshi to be light and engaging, challenging and easy to approach. I was never stuck, but I did feel several times that the proper action to take was unclear. Or, better put, was non-existent. Whatever action I took would be neither bad or good. This left the value of what I did to later be determined by hindsight. Most of the time, I felt good about my choices, while other times I felt pretty bad. In all cases, how I felt about what I did always came down to how my opponents scored. Nothing feels as good as earning points thanks to another’s actions.

Do try Senshi when time permits. It’s a neat little puzzle to solve that requires forward thinking, Ninja like timing, and the ability to learn as you go, adapting to the lesson at hand.